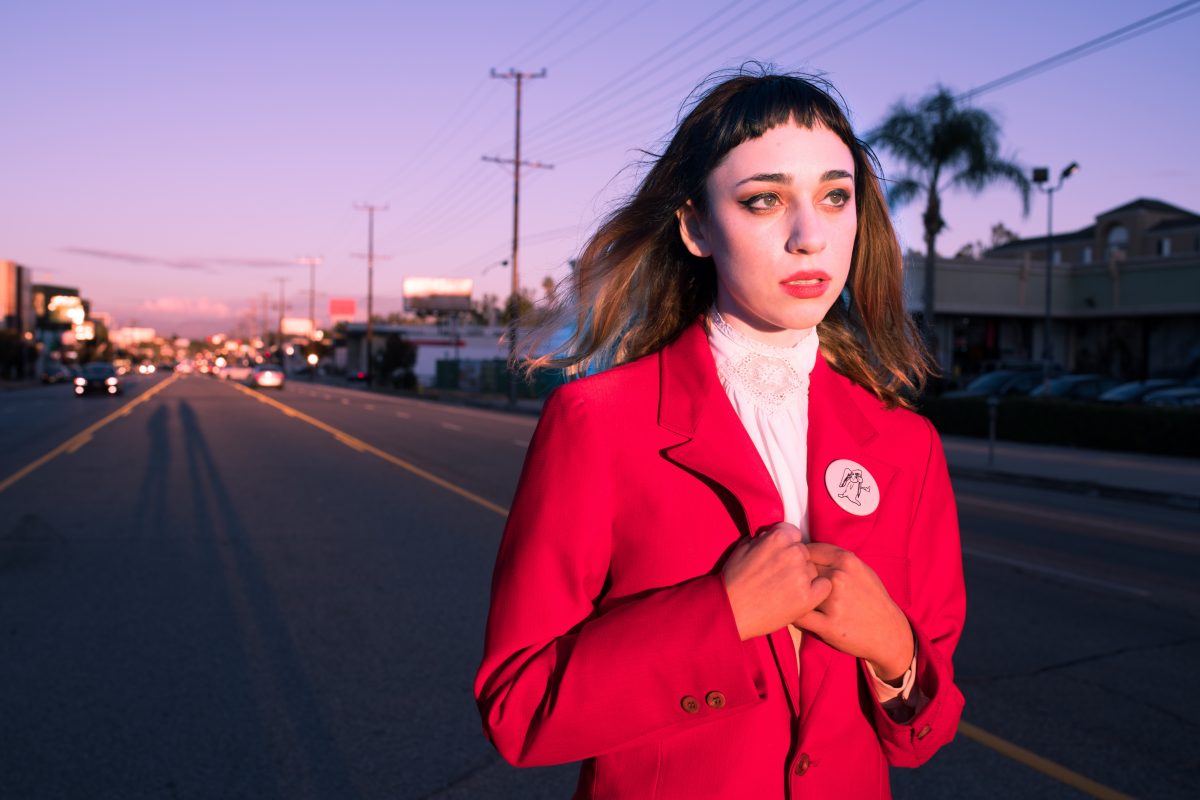 FMK packs an epic emotional ride into its two-minutes-and-two-seconds. Barbed, intimate confessional narrative opens out into a glorious glam-pop moment of exuberant bitterness and sweet regret. FMK (the acronym is explained in the lyrics; we’ve all played the game I’m sure) is the opener from Cohen’s forthcoming first album Zagg, which follows last year’s lovingly lapped-up EP releases Tacoma Night Terror Parts 1 & 2. Listening to her hyperemotive drollery involves sinking through about 20 layers of ironicness, which makes the experience all the more truthful. Laugh, weep and dance at the movies.

Poetic champions Fontaines D.C.‘s Roy’s Tune is a devastating lament for lost innocence, an ode to perseverance in an environment where service industry jobs can disappear overnight but human values remain. Lush and reflective, Roy’s Tune shows there’s a lot more to the Dublin band than jolting ‘post-punk’. It’s from hotly-anticipated album Dogrel due out in April.

She Drew The Gun – Paradise

‘Paradise…there’s trouble on the breeze’ sings Louisa Roach, in a track that sounds like a blissfully melancholy surrender to capitalism. But She Drew the Gun are about resistance and Paradise’ hypnotic slow-stomping electronica is a challenge to see the reality behind the images we sell ourselves through the ‘plastic screens’ of our phones and devices. Produced by The Coral’s James Skelly, Paradise is the third single to be taken from the Wirral foursome’s sophomore album Revolution Of Mind following the BBC 6Music A-Listed tracks Resister and Something For The Pain.

If the phone screen is an icon of our times so is another rectangular transparent item, the ‘thermoplastic riot shield’ that inspires this slice of quirky angst from Baltimore-based duo Matmos. It’s taken from the imminent album Plastic Anniversary, on which the sounds are generated from plastic objects – ‘broken LPs…synthetic human fat, a silicone gel implant, giant waste containers and much more.’ Lurching queasily between towering dance sounds, squeaks, squeals and drops of electronic space, Thermoplastic Riot Shield is unsettling in a good way.

After the Burial – Behold the Crown

An atmospheric prelude leads into insanely urgent warning-siren guitars as the latest offering from metalcore survivors After the Burial gets going. There’s melody glimpsed through the hard-hammering drama and musical side-trips giving the sense of a varied epic. It’s like a prog track eviscerated on a battlefield in hell. And yet – as the endearing video shows – this encounter with a Crown of Misery is all for jollies.

Chatroom is a gigantic pop song ‘about achieving ecstatic joy through consuming rage’ – dark lyrics riding in an upbeat vehicle. The synth-driven sound suggests that NYC-based Charly Bliss are changing up their sound since crunchy-guitar-filled first album Guppy.
Judging by this and previous single Capacity their next longplayer Young Enough could be a massive iced gateau of power pop goodness.

Darjeeling, the ‘Champagne of teas’, has a delicate flavour – so delicate it can seem too slight and slender if you’re expecting a builderish hit. But bear with it and a rewarding tea experience of subtle depths will be yours. Thus it is with this single from Brooklyn-based five-piece Barrie – a warm and drifting dream-pop montage. The band define themselves by their multinational origins and this track narrates their coming-together in New York. This single is a cupful of unassuming but insistent beauty.

(As a random aside in the ‘tea+music’ zone, the secret to making good tea of any variety, as expounded by Vic Godard in a long-ago NME interview, is to pour the water on from a great height.)

Catchy and scintillating, this indie-pop odyssey from Liverpool fourpiece The Night Café has a sultry introspective depth beneath its surface shimmer. The single is a foretaste of their debut album to be released this summer on AWAL, part of a busy year for the lads who will be supporting Circa Waves touring the UK and appearing at festivals including Reading, Leeds and Sounds of the City.

Loyle Carner’s deeply personal rap intertwined with Jorja Smith’s swirling vocals cut to the heart on this collaboration. A song ‘about all the people who Loyle has looked to for support but been let down by over the years, and also him wishing the people he loves around him now had been there when he was younger’, its autobiographical openness delivered over sparse instrumentation makes for a compelling listen. We can look forward to seeing Loyle at Liverpool Sound City in May.

Philadelphia rapper Tierra Whack lays into imitators who ‘steal her flow’ on CLONES, though it’s hard to imagine that anyone would even try to imitate such a distinctive and varied artist. At 2’51” this is epic length compared to the one-minute tracks comprising surreally brilliant 2018 debut album Whack World. CLONES opens with sneeze: ‘Let’s keep that, I am serious, don’t delete that…’ and drops into a weirdly mumbling, sliding vocal delivered over an irresistible beat and sinister electronic drone. CLONES is part of #whackhistorymonth, a project to drop a song a week, that kicked off with the equally jaw-dropping Only Child. By the time you read this there will be others. Jump on.

Amyl and the Sniffers – Monsoon Rock

You can’t fight the mighty power of the weather in this suitably relentless track from breakthrough Aussie punks Amyl and the Sniffers. Might as well get well soaked and have a massive party. Driven by a pit-inflaming riff Monsoon Rock does its thing with headlong abandon, punk with hard-rock chops that doesn’t outstay its welcome. This banger bodes well for the mullet-sporting foursome’s forthcoming album.

More temperate spring weather is evoked in a shimmering AA-side from Sam Evian. Smooth harmonies and a sublime psychey uplift define tracks that are sweet but not cloying. Roses sound like a sublime lost sixties B-side and Cherry Tree brings the peace in a blissful anthem. With blossom coming out right now in the UK, make plans to listen to this beneath a tree to get the full wistful Sensurround experience.