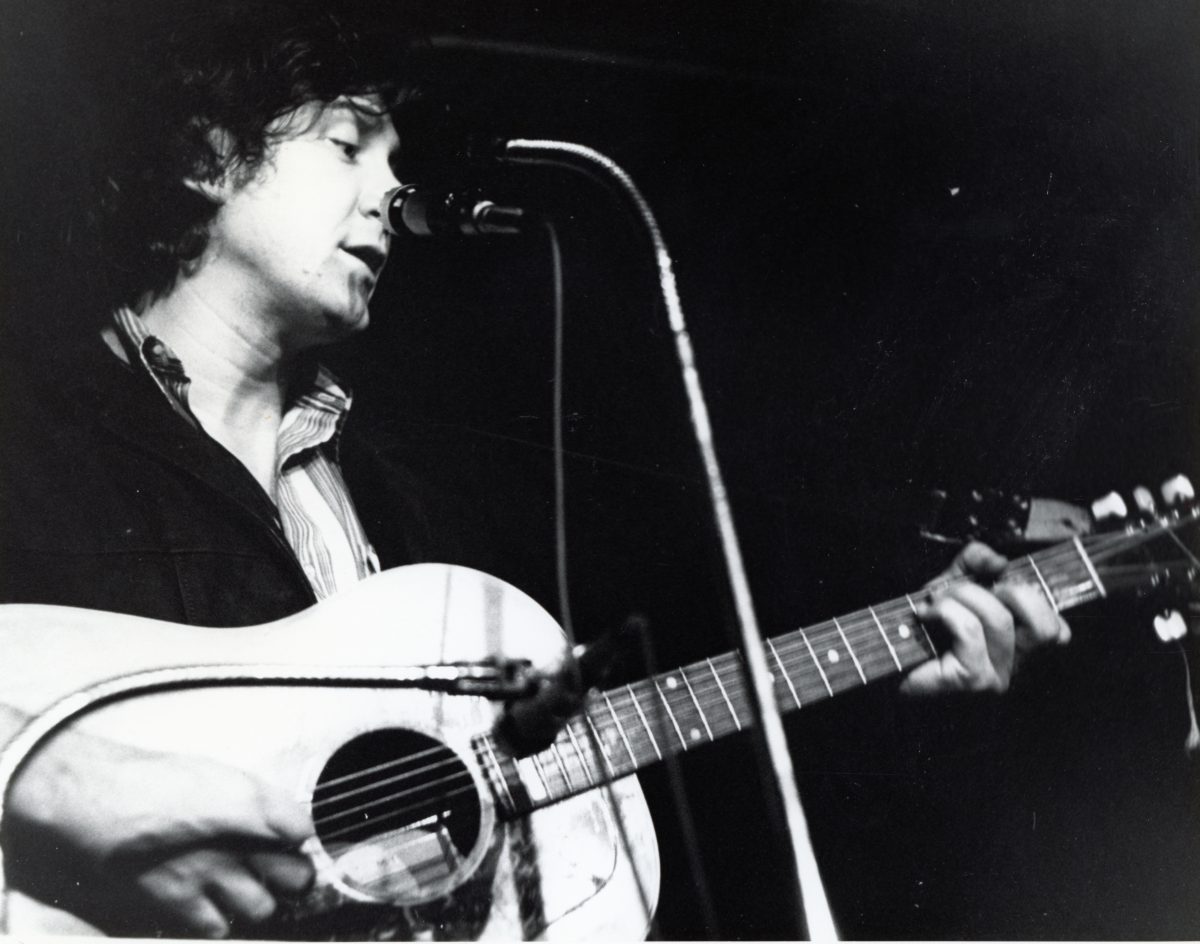 It was raised eyebrows at this end when Morrissey revealed his new album, California Sun, includes a cover of Phil Ochs‘ Days of Decision.

Morrissey reinterpreting the work of a civil rights and anti-racist activist?

A curious move, to put it mildly.

Throughout his career, disturbed as he was by social injustices and inequality, Phil Ochs wrote about the changes going on around him, and those which needed to happen.

The 1965 album from which Ochs’ own version of Days of Decision comes, I Ain’t Marchin’ Anymore, sees the singer songwriter in a both reflective and optimistic mood.

It Includes anti-racism and anti-war songs, civil rights and anti death penalty pleas, he mourns the life of assassinated US President Jack Kennedy, reflects on his own religious sympathies and composes music around a classic poem.

His time as a protest singer with a no-frills acoustic guitar in the early to mid-1960s saw a more journalistic bent to Ochs‘ songwriting but ironically as disillusionment about the world set in, his scope opened up and his writing contained a more poetic quality.

Was Merseyrail right to remove posters for Morrissey’s new album?

His releases – he managed eight studio albums in his short life, despite struggling with mental health issues – incorporated more complex and ambitious arrangements as time went on. Rehearsals for Retirement, containing baroque orchestral instrumentation and electric guitar, is a case in point and turns fifty years old this month.

A strong sense of patriotism and attachment to the military, Ochs – brother of photographic archivist Michael Ochs – came from a military family, and went to military school – gave him, I like to think, a wider sense of perspective than some of his more folk contemporaries.

Ochs‘ work is underscored with sarcasm and cutting wit, to the point of cruelty sometimes, and in a number of ways he was very much the product of his time – in the songs below you will hear cultural references, about people of colour, lesbians, gays which are not acceptable now but were part of common discourse fifty years ago.

Dated language aside, what he was trying to say was very clear and I’d argue that, paradoxically, Ochs was also ahead of his time, railing against the constriction of the protest singer rule book and exploring varied genres.

This stubborn non-conformity and increasing ill health into the 1970s kept a wider commercial success at bay. He died in 1976 aged just 35, but there is much to fall in love with about Phil Ochs‘ work in the modern day.

His lyrical prowess, his golden, confident Texan tones which showed real heart, one he kept pinned on his sleeve, and his wonderful refusal to stay inside the lines see to that.

One of his best known and most empathetic songs, acknowledging his own good standing and circumstances, and reflecting on the misfortune of others. There But for Fortune was covered by Joan Baez – who enjoyed chart success with it – and many others.

In Mississippi in 1963, civil rights activist Medger Evers was shot and killed by a white supremacist. It was to be a murder which had far reaching consequences. Phil Ochs wrote ‘the country gained a killer and the country lost a man’ in this song about the killing, simple but powerful words.

After the shooting, Evers was initially refused admittance to hospital but a rethink made him the first African American to be admitted to an all-white hospital in Mississippi; his killer was eventually convicted after thirty-one years and two murder trials.

Days of Decision is concerned with societal oppression, intolerance of others’ views, the suppression of free thought and expression. Whether Morrissey’s not entirely unpleasant version of Days of Decision – I like it, personally – is an attempt to subvert the meaning into a scathing commentary on politically correct thinking, who knows?

The original leaves no room for ambiguity.

Acoustic guitar and passionate rhythmic vocal, the lyrics and message are clear and loud and unequivocal.

Here we have Phil Ochs at his politically satirical best, savagely ripping the piss out of those who cherry pick causes at convenience. In it, he addresses racism, Kennedy‘s death, civil rights and part timers.

This narrative poem, written by Alfred Noyes in 1906, was set to music for Phil‘s second album. A love story and ghost story rolled into one, in which a highwayman’s sweetheart sacrifices herself for her lover. It carries that sense of injustice too – soldiers and those in authority abusing an innocent party, a theme present in many of Ochs‘ political songs, including my next pick.

I Kill Therefore I Am: Rehearsals for Retirement (1969)

Ochs was vocal about his disillusionment with the world around him both on this record and off it – the album cover features his own tombstone. The record was made in the aftermath of the 1968 Democratic National Convention in Chicago, where anti-racist campaigners were beaten and gassed by police, an act which Ochs viewed as signifying the ’death of America’.

To me, it’s an album which represents its time remarkably efficiently – the ’60s are almost done, its time for the harsh realities of 1970s to bite. Ochs in Rehearsals for Retirement is down but in no way out. I Kill Therefore I Am is a barbed attack against authority, in this case, the police, a response to the events in Chicago.

Ochs‘ voice is not celebrated enough; folk and country tinged, it was curiously labelled by one observer as ‘unpolished’.
In I Kill Therefore I Am, his vocals express sincere emotional pain. He is hurting, and we feel it with him. If you don’t, there’s a cold empty space where your heart should be.

Single Bwatue (‘canoe’) b/w  Niko Mchumba Ngombe was written by Phil and two African musicians Dijiba and Bukasa, during a visit to Kenya in the early 1970s. The A side’s lyrics are in Lingala, the flipside in Swahili.  Performed with Pan-African Ngembo Rumba Band, the recordings are rustic at best, but on Bwatue we can hear the African singers harmonizing, warm and low, Phil‘s clear Texan tones soaring at the chorus.

The single bombed on release, somewhat predictably, but now changes hands for over £300, and what we have here is a very early blending of music from the developing world (‘world music’ as it was later coined) and Western pop, predating Paul Simon‘s Graceland by thirteen years.

Here in this short, hilarious recording, Phil has more than a little fun, mocking the biggest political scandal of the time – the Profumo affair. It’s included in this charming posthumous release, a compilation of demos for Broadside folk music magazine in the early to late 1960s.

This live version of The Beatles‘ I Should Have Known Better is a total joy, we can hear and feel Ochs‘ pleasure as he performs it. It’s very telling that at the end, he seeks BUT fails to convince his audience that Lennon & McCartney as songwriters are very much in the folk tradition, in that they perfectly document a sense of the now.

The Beatles-Ochs relationship does not end there; in 1971 Lennon and Phil met up and jammed together in a  Michigan hotel room, playing Chords of Fame (from the 1970 album Greatest Hits) and Rhythms of Revolution.

A nervous Ochs is put at ease by a surprisingly kind Lennon as they talk music, the latter showing a graceful gentleness and respect, not qualities we especially associate with the Beatle at that time.

The ironically titled Greatest Hits album sees Ochs in an Elvis-style gold lame suit, designed by Nudie Cohn, a nod to Presley‘s 50, 000, 000 Elvis Fans Can’t Be Wrong.  On the album’s back cover is written somewhat self deprecatingly, 50 Phil Ochs Fans Can’t Be Wrong. On this, his final studio album, he invited members of Elvis‘ band and The Byrds to play with him.

On what otherwise is most country-leaning of all Ochs‘ albums, In Jim Dean of Indian, he sings over a simple piano. His observations around the life and death of film star James Dean throw open questions around the problematic concept of the American dream.