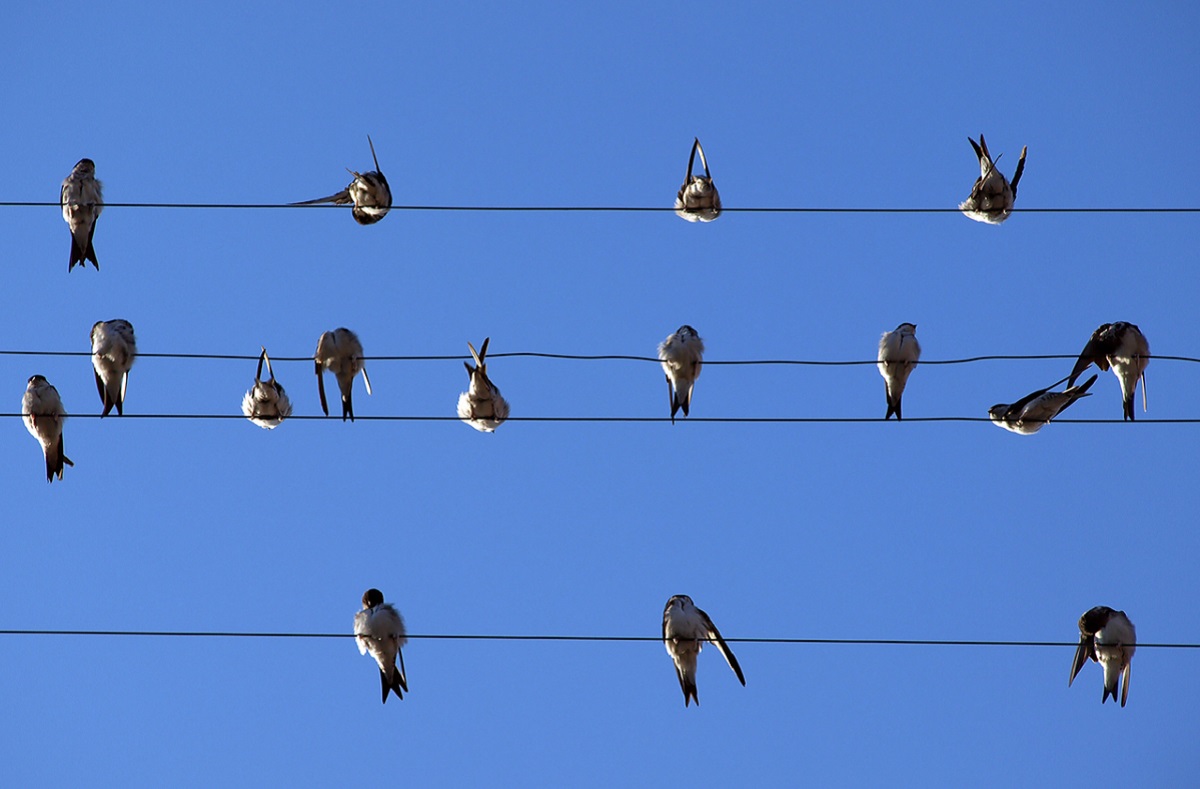 With the RPSB recently crashing the top 20 with nothing more than bird noises, Getitnothis’ resident bird enthusiast Matty Loughlin-Day brings you a selection of songs about our feathered friends.

There is a plethora of work inspired by birds and their songs. If this was a different article, I’m sure we could fill pages in discussing artists, writers, poets and musicians’ works that have been graced with the muse of the birds.

Bird song, ancient legends and superstitions about various types of birds have long been the source of much creativity, not to mention the innumerable bodies of work that reference the idea of flying away.

But rather than crowbar songs in here that use birds as metaphors (The Beatles’ Blackbird for instance) or starting points for further imagery (such as Leonard Cohen’s Bird on the Wire), Getintothis present a list of songs which are either directly about birds, or try to capture their essence in aural form.

So, let’s spread our wings and begin…

If the inclusion of this song in this list seems a tad trite and obvious, there’s probably good reason for this, given the mythology of not only the song, but indeed the gigantic seafaring bird.

Inspired by the Samuel Coleridge poem The Rhyme of the Ancient Mariner, this meandering, gliding instrumental has over the years became synonymous with one-hit wonders, weighed down by the success of their solitary smash. In nautical legend,

it is cursed luck to kill an albatross; anyone who did so would be forced to wear the bird round their neck, burdened with this jinx forever – hence the fabled ‘albatross hit’ that afflicts so many bands, desperate for crowds to stick around once they’ve played their crowd-pleaser.

An inspiration for no less than John Lennon (see Sun King), the swoon of the song, with its pulsating, hypnotic bass line, wave-like crashing cymbals and reverb-heavy guitar, does capture the essence of the bird, which can glide on the wind seemingly indefinitely.

So languid is the albatross, some even suggest it can sleep while flying, such is their laid-back approach to avian life.

Put aside those M&S adverts, forget the amount of times you’ve heard this, try it again; bathe in Peter Green’s tones, wash yourself in those vibrating six-strings and try not to imagine doing the same.

A song that tops “the nation’s favourite…” charts so frequently as to dangerously flirt with cliché, The Lark Ascending has nevertheless lost none of its power and fragile beauty over the 100+ years since its inception.

Another song inspired by a poem (George Meredith’s, The Lark Ascending), Williams’ ode to the skylark begins with a violin fluttering as dramatically as the bird that “drops the silver chain of sound of many links without a break” before being joined by an orchestra that creates a wonderful backdrop to set it against.

Skylarks are renowned for their angular flight pattern, which sees them dart upwards, suspending themselves in the heavens and then suddenly parachuting towards terra firma, all the while warbling their liquid, shimmering songs.

From Indiana Jones to Tarkovsky: falling in love with the movies and a personal journey through cinema

Williams’ masterpiece captures this perfectly and is all the more haunting given the context in which it was written – set against the backdrop of the world going to war in 1914, arguably highlighting the fragility of the natural world against man’s propensity for destruction.

As if that wasn’t dramatic enough for us all, it was also the song playing while Hayley Cropper chose to shuffle off the cobbles of Coronation Street. Sorry, give me a minute.

Elbow main man Guy Garvey is an avid twitcher and indeed the band have a song titled, handily enough, The Birds, which ponders what secrets certain birds might hold in their “tiny racing hearts”.

This song however, the opening track from the majestic The Seldom Seen Kid pairs the fluttering of a newly conquered heart with the stunning spectacle that is a murmuration of starlings.

Oft overlooked and somewhat unremarkable at a distance, up close, starlings are a treat to behold; a glossy, shimmering, combination of speckled green, brown and purple.

Noisy buggers and common visitors to gardens, as impressive as they are up close and personal, the real magic of starlings is when they get together in groups.

To watch a gathering of starlings – known as a murmuration – move across the sky is surely as close as you can get to seeing music in nature.

In groups of hundreds, the individual starlings become greater than the sum of their parts and appear to exist as a single organism, twisting and turning, silhouetted against the autumn dusk sky.

The exact reason for this avian ballet is debated, but really, it’s immaterial – to simply observe this event unfold is as sure as anything to make the heart skip a beat.

Therefore, in this song, when Garvey states how “the violets explode inside me when I meet your eyes” leaving him “spinning and diving like a cloud of starlings” before asking “darling, is this love?” you can only answer that if it’s anything like the real thing, then surely, yes, it must be.

British Sea Power are probably the perfect band for an article such as this. A quick scan of their recorded output suggests a certain affinity with all things feathered – Birdy, The Pelican, Don’t you want to be a Bird?, ‘Chicken Pig’ – not to mention their merchandise, on which silhouetted birds are a staple, alongside the heroic Heron Addict motif.

It would however be churlish to pick any other song from their catalogue than The Great Skua.

Great skuas are seabirds that are, quite frankly, narky sods, often harassing other seabirds, stealing their food and even (gulp) killing puffins.

In flight though, the great skua is an impressive beast. It can demonstrate impressive ferocity in its wings, either by its high speeds in pursuit of prey or in its ability to coast above the waves, flashing its white tipped wings to those lucky enough to be near enough to see it but not get pecked.

An instrumental song, on record this is a majestic representation of the bird, soaring and subdued in equal measures, with an undeniable power lying in wait that builds up to a glorious, rapturous wordless refrain.

Live, especially on occasions when the song has been played with a brass band or in front of a gigantic backdrop with a video of the bird in its oceanic element, it is as near as this writer has ever come to a religious experience.

And just to make it all about me, this was the song my darling wife and I signed the register to at our wedding.

Any song from Bert Jansch’s 1979 Avocet album would be suitable for selection here, with every track being named after a bird.

The title track, itself based on an old folk song about another bird (The Cuckoo) is a fabulous, sprawling side-long work, combining blues, folk and jazz as only Jansch could and rightly gains most attention.

Looking beyond that though and digging deeper, this song, the closing number of side two is a light-hearted, flittering, melodic instrumental, featuring no less than Danny Thompson on bass.

Kittiwakes are sea-loving coastal gulls, spending most of their life out at sea, only occasionally coming near land to rest on clifftops and rock ledges.

Named after their call, they often follow ships in attempt to grab whatever grub they can; in a pleasing reversal of this, one of the pilot boats on the River Mersey is named after these elegant birds, guiding larger ships through the channel, navigating their way back to shore.

Nightingales are famous for their song, so much so that the first live outdoor recording the BBC ever commissioned was of the musician Beatrice Harrison playing her cello in the woods near her Surrey home, accompanied only by the singing of the birds.

Seemingly synchronised, the nightingales responded to her cello and appeared to be singing back, leaving the nation enraptured and enthralled.

Such was its popularity, it was repeated every Spring for 12 years, earning Harrison the imaginative moniker of the ‘Nightingale Lady’.

Here, Cohen sings of building a house near the woods so he can hear the song of the nightingales who he “lived but to be near”. Initially, “it was sweet and it was good, and love was all beginning”, however before long, the bird flies away to another wood and our hero is left with the echo of the song in his ears and his heart.

Cohen dedicated this song to the singer and actor Carl Anderson, who died in 2004, stating “though you are singing somewhere still, I can no longer hear you…” – there can’t be a much more fitting tribute.

Bird song is often cited a relaxing, tranquil sound that can soothe the savage beast, and often, that is the case.  What is less frequently referenced or imitated in art is the other side of bird song; the chaotic, wild, sprawling noise that can stir up excitement or irritation, depending on one’s viewpoint and current state of mind.

Fitting then, that Charles Mingus composed this track, tucked away on his mighty ‘Mingus Ah-Um’ album that reflects this.

A typical Mingus piece, in that it is a cacophony of pandemonium, colour and movement, the composer was keen stress that the song is homage to the frenetic call of wild birds and not a tribute to Charlie ‘Bird’ Parker, a long-time collaborator and friend.

The buzzing, darting intro sets the tone for the song, a high-energy frenzied composition that could either delight or drive you mad; sound familiar?

A tribute to Mark Everett’s mother, who was an enthusiastic birdwatcher, the Eels frontman explained that this song tried to capture the fact that life is a flurry of the good and the bad – sh*t happens, essentially.

Not caring for the “trophy wives of the astronauts” or the “mean little people”, but rather, happy to set up a “feeder for you to perch on”, this short ditty is a reminder that sometimes it’s OK to state the obvious.

You don’t always have to use up all your human energy to create an epic poem or side-long song to recreate the flight pattern of a certain bird, nor do you have to slave away at learning their Latin names or mastering the distinction between a bullfinch and chaffinch; sometimes it’s OK to simply reason “I like… birds!”.