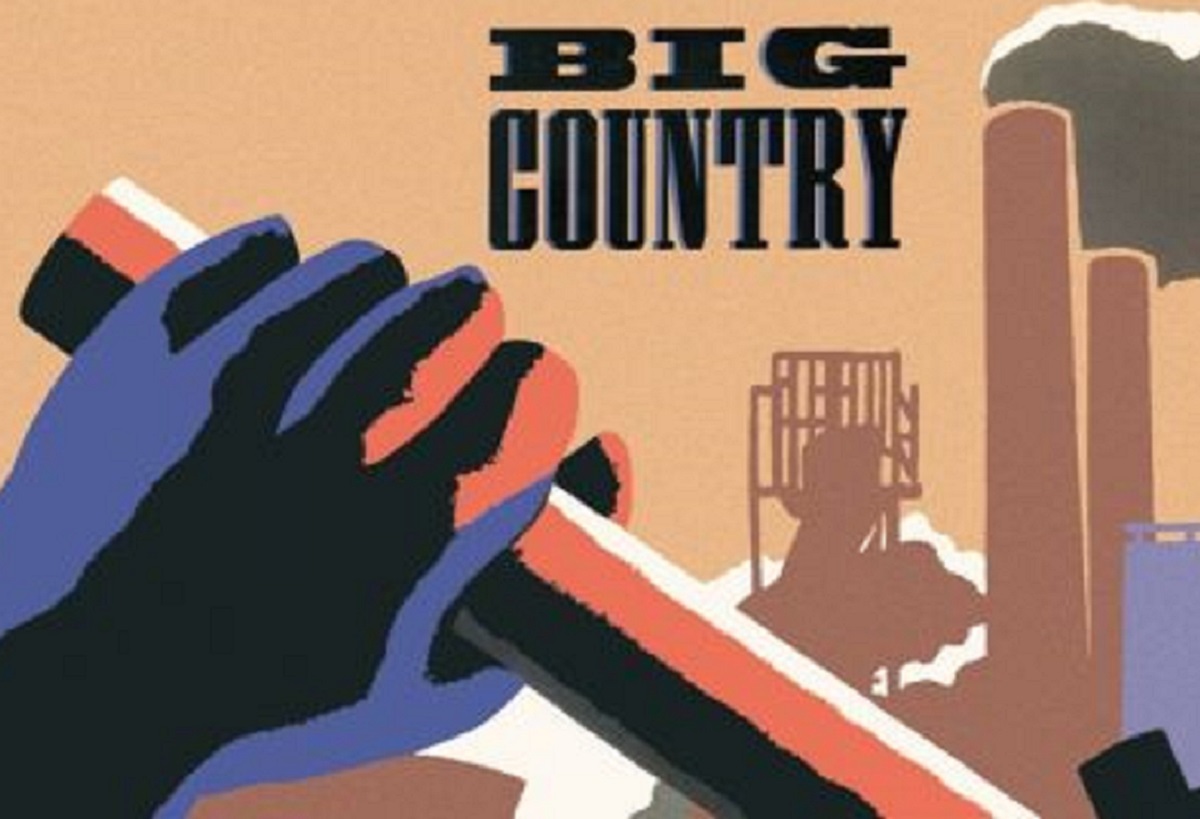 Big Country’s Steeltown may have been lost to the mists of time and the vagaries of fashion, but Getintothis’ Banjo loves it as a lost classic.

Big Country’s Steeltown may make a strange choice for a lost album, seeing as it entered the UK charts at number one, but in many ways, it could be said to be responsible for halting the band’s momentum and scuppering their rise to be, alongside U2, standard bearers for guitar music in the 80s.

By the time Stuart Adamson put Big Country together, he had already been a successful musician for a number of years, having formed The Skids at the tender age of 18.

The Skids were hugely successful for a new wave band, scoring several top twenty singles and albums, Adamson and singer Richard Jobson wrestled for control of the group, and the guitarist left the band in 1980.

He formed Big Country with friend Bruce Watson and, after a few initial line up changes, added the excellent rhythm section of Mark Brzezicki and Tony Butler, a couple of session musicians who were tiring of being hired hands.

Their success was quick to happen, with second single Fields of Fire hitting the top ten.

They gigged heavily, playing some memorable concerts in Liverpool, including this writer’s 21st birthday at the Liverpool Warehouse.

With U2 they shared Celtic guitar arrangements, producer Steve Lillywhite and a taste for widescreen guitar epics. As a result, the two bands were regarded as being equally primed for success and Big Country were tipped to become one of the county’s biggest bands.

The band even made it Stateside, with single In a Big Country reaching number three and The Crossing making the top twenty.

The Replacements Don’t Tell A Soul thirty years on: beauty, transcendence and chaos

Everything was going well for Big Country, but unfortunately for the band, this was to be their high-water mark.

How much of this is due to the fickle finger of fashion is hard to say, but second album Steeltown was not well received, despite its initial success.

As such, it is often regarded as the start of the slide for Big Country.

But beneath all of this, there is an incredible album that has great depth, killer tunes and some incredible musicianship.

Steeltown built on the epic grandeur started with The Crossing.

But where its predecessor was full of us-against-the-world romanticism, Steeltown dealt with industrial decline and a generation of Scots being forced to move to manufacturing towns to find work and support their families.

It is easy to imagine Americans particularly finding this hard to relate to and the album’s highest chart placing there was a lowly number seventy.

But in Steeltown, Big Country had crafted a worthy second album and one that has been cruelly sidelined by history.

Opening track Flame of the West starts things off with an extended instrumental opening that demonstrated the power the band now had.

Adamson’s guitar soars and Big Country show why just they were regarded as the saviours of guitar music in the synth-led early 80s.

Their sound has grown and developed muscles from the music they made on The Crossing, but they have not done this by turning into a heavy rock band as so many other 80’s guitar bands did. Harmony, intelligence, an easy way with melodic hooks and a knack for an epic chorus are all still present and correct.

Before the album’s first song has finished, Big Country have proved themselves to be masters of what they do and shown that they could develop their sound in dramatic style.

The album’s sound is thicker and denser than previously and one wonders whether part of the band’s fall from favour is that they abandoned the ‘guitars-like-bagpipes’ sound that first brought them to attention and could have been regarded as their gimmick.

Perhaps the people who latched onto them, for this reason, were put off by their new mature sound.

Time has been kind to Steeltown and, shorn of its cultural baggage, it stands up as one of the best guitar band albums of the 80s.

Adamson’s songwriting hits its peak and his playing must surely mark him out as one of the best guitarists of his generation. It is no wonder John Peel described him as ‘the British Jimi Hendrix’.

East of Eden and Where the Rose is Sown turn the epicness up to 11 and we get the feeling that, were people to rediscover this incredible record, it would be proclaimed as a classic the world over.

Sometimes, for whatever reason, great albums can disappear from view far too quickly and far too completely. Steeltown suffers from this more than most and it is verging on criminal that it has been allowed to do so.

There is a case to be made that Steeltown was born into an age where it struggled against prevailing fashion. When it was released in 1984, The Smiths released both their debut album and compilation Hatful of Hollow and the zeitgeist had shifted.

The general move was against rock bluster and epic songs of struggle and towards a more personal, tender indie sound and introspective lyrics.

As is often the case with lost classics such as this, they were perhaps at odds with the times and as a result, were overlooked, their positives being seen as negatives due to fashion rather than artistic merit.

However, the joy of rediscovering them is one of life’s great pleasures and this is where Steeltown comes into its own. Stripped of the baggage of the era, it is a truly wonderful record that should have cemented Big Country’s reputation as one of the true greats of the time, rather than have precipitated their decline.

Next album The Seer aimed at stadium rock, with its leaning towards old rivals U2, but by now Big Country’s ascendance was over.

Adamson had struggled with alcoholism. He had been 10 years sober but had fallen back into drinking.

His second marriage had broken down and he was facing a court appearance for drink driving. He flew to Nashville where he effectively went missing, checking in and out of hotels for weeks of heavy drinking. A private detective was hired to find him but was unable to.

On December 4, Adamson flew to Hawaii and checked into a hotel near the airport and ordered three bottles of wine from room service.

On December 16 a hotel employee found him hanging by an electric cable from a rail in the wardrobe.

Today, Big Country continue to play and they have left a solid body of work that is still being discovered by new generations of fans.

Those wishing to join in could do a lot worse than starting with Steeltown and be treated to an album of beautiful, windswept classic songs that still have the ability to amaze.