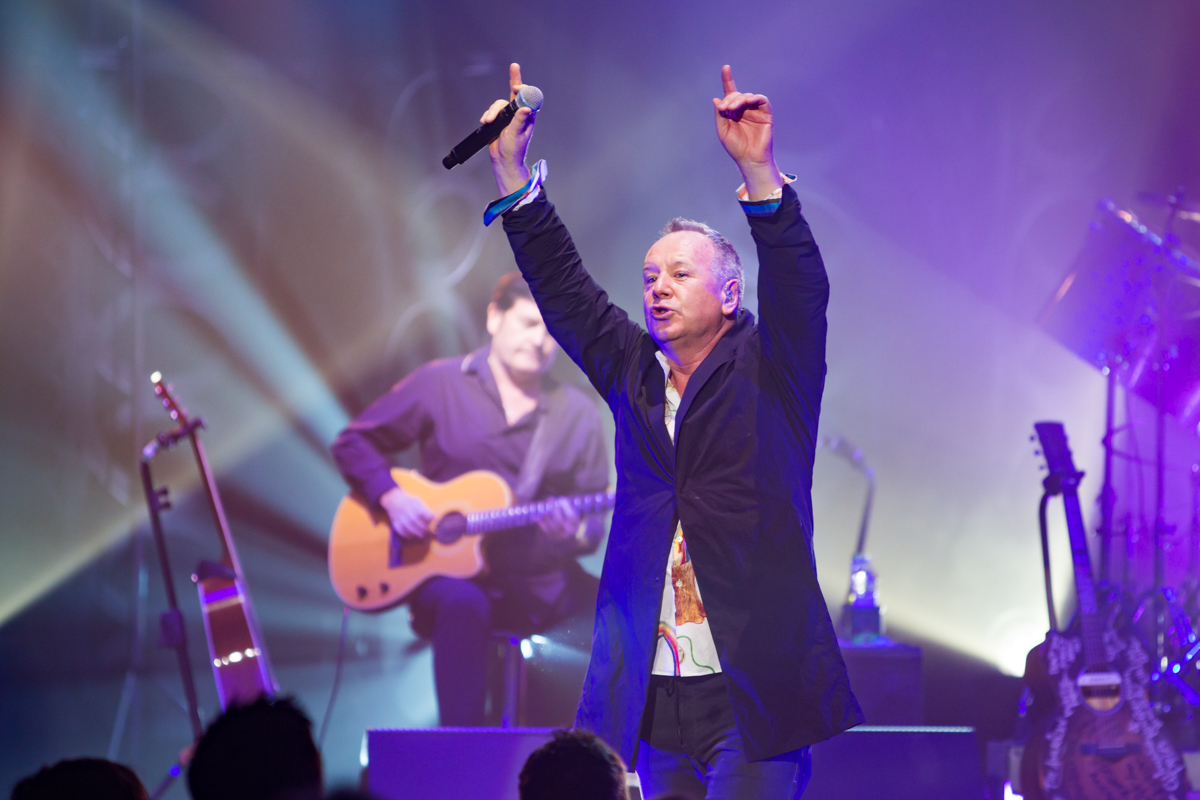 Formed from the ashes of Glasgow punk band Johnny and The Self Abusers back in 1977, Simple Minds are still going strong, with a huge European Tour on the back of a career-spanning compilation, 40: The Best Of 1979 – 2019, which is out next month.

And as an indication of the esteem they are still held in the record-buying public, this week has seen their newly released live album, Live In The City Of Angels, hit the UK Album Top 10.

This was not always the case from the start however.

Their early few records, which after years of being somewhat ignored have now come out as being beloved influences by a wide range of contemporary acts such as the Manic Street Preachers, Gorillaz and The Horrors amongst many others, didn’t see them make that much of an impact initially.

it was a very gradual process over a number of years.

1979 debut Life In A Day, and 1980’s Empires And Dance are now seen as somewhat seminal works, although not massive chart botherers.

It was only with the 1982 album New Gold Dream (81-82-83-84), regarded by many as a career highpoint, where the big singles, such as Glittering Prize, Promised You A Miracle and Someone Somewhere In Summertime foisted themselves into public consciousness.

1984’s Sparkle In The Rain was seen as their attempt to cross the divide from critically acclaimed to a mainstream chart act.

As almost perfect as this album was, this backfired somewhat, as it was also perceived as a change from interesting electronic music to overblown grandiose stadium rock, which saw them lose part of their original audience who’d been with them from the start, whilst bringing in a horde of new fans, no less passionate, but in love with a completely different band.

Early 1985 saw them reach the top of the US Billboard charts with the omnipresent pop-fluff of Don’t You (Forget About Me) from the John Hughes film The Breakfast Club.

Strangely the single was not included on the album that followed later that year Once Upon A Time, the third in a trio of mid-80’s masterpieces.

It could be (correctly argued) that this did indeed mark the end of a phase, but that was nothing to do with chart placings and massive outdoor gigs.

It was to mark the end of coherent, excellent records (at least for now).

1989’s Street Fighting Years was the dictionary definition of a mess of an album, all over the place, even though it spawned their only number 1 single Belfast Child.

This record was seen by many as a high point of pomposity, and the transfer of trendiness to mainstream was finally complete, seeing them mocked as watered-down version of U2.

This really was a jump off point for a lot of people, and the chart positions as well as quality started to tail off dramatically.

Real Life was bearable, Good News From The Next World and Neapolis were not, and the true nadir was the covers album (never, ever a good move) that was Neon Lights.

Thankfully, this only turned out to be the end of phase one of Simple Minds.

They toned down the dramatic emptiness dramatically on their 2002 comeback album Cry which showed the first shoots of recovery before their absolute return-to-form release Black And White 050505 which got them back into the public’s consciousness.

The renaissance was best seen by their return to becoming an arena band again, after a few years where they were playing smaller venues to diminishing numbers, they had always been a great live proposition which kept them in business through the wilderness years.

2014’s Big Music was a slight mis-step, but this was swiftly atoned for with last years Walk Between Worlds, which is their finest piece of work since Once Upon A Time, and saw them back in the Top 5 for the first time in over 20 years.

Which brings us back to the forthcoming activity, the live album, the greatest hits and the arena tour, although strangely there’s no North West date yet, it seems to make perfect sense to take look back on their finest moments.

Still one of their most goose-bump live moments to this day and far and away the best song on the (only in my humble opinion) slightly over-rated album of the same name.

It had a new lease of life in the 90’s as a dance sample, used by Utah Saints and Usura amongst others and like most of the songs on this list, sounds as fresh now as it did back then.

One of their finest earlier moments, this just reeks of the Roxy Music influence that was sprinkled throughout those early records.

It is the sound of a band finding it’s feet, leaning on their peers.

Unbelievable to think that this is now 40 years old.

The stand-out track from their most recent studio album, an album full of highlights.

It feels like an updated version of Alive and Kicking, with the mix of vocals highlighting perfectly the reborn sound of the newest line up.

The next album will have a lot to live up to.

Gang of Four Entertainment! at 40; a furious explosion of political polemic

This could have been any one of the similar singles of that era.

There was also The American or Love Song, but this one just topped them.

Such a funk element to the chorus, another one that’s still lovingly trotted out live.

Their only number one to date and the most divisive song in their history.

At the time it was seen as either a step too far, or the perfect encapsulation of where they were as a band.

It was like three songs in one, the subject matter was controversial, it was like nothing that had come before.

It was the lead track on a three song EP (Mandela Day and Biko were the other two songs, track titles alone that shows where the band were politically).

All three also ended up on Street Fighting Years, also showing the paucity of the material they had available.

A great song on its own, but when coupled with the bizarre video below, it’s place in our Top 10 was guaranteed.

The dove, the not-so-special effects and some of Jim Kerr’s outfits…the less said the better.

Features the utterly marvellous Robin Clark, whose contribution to this album should never be overlooked, who knows what they would have done next if she’d still been there?

One of the run of big singles from the behemoth of an album.

Not a single, and probably no-one’s favourite Simple Minds track, but it sums up the album, a hurried follow-up to the debut and frankly a bit of a mess.

Although one that’s recently been redefined more than others, on release people thought it was nuts.

With its plain blue blank cover and short, weird prongs of synth attacks, this was a band going back in the studio a little bit too quickly.

This album fired them into the big time, how this was never released as a single, god only knows, (god only knows).

Especially as they ended up releasing more than half the album as singles, as was the fashion of the time.

Another Robin Clark master-class, this was an opening statement of intent, the Rock And Roll Star of it’s day, if you will.

Their best pop single, much better than the worldwide smash hit which proceeded it, Don’t You (Forget About Me).

This writer clearly remembers buying the seven inch and playing it over and over for hours,days and weeks.

Best known for being ruined by Sky TV’s overuse of it during the advent of televised football, despite this it is still a staple in any 80’s playlist.

Yep, it could be seen as an absolute cop-out to make a whole album the number one choice, but if I hadn’t done, at least 6 of the tracks would have been cluttering up the top 10.

It’s their highest point in the career full of them, the perfect album at the time of it’s release.

They were growing into their music, and the absolute self-belief and confidence that runs through this album is, at times, staggering.

Ignore the talk of bluster, their cover of Street Hassle is soulful, The Kick Inside Of Me is a joyful punk racket, Shake Off The Ghosts a mystical, haunting instrumental.

Listen, enjoy, be thankful it exists.