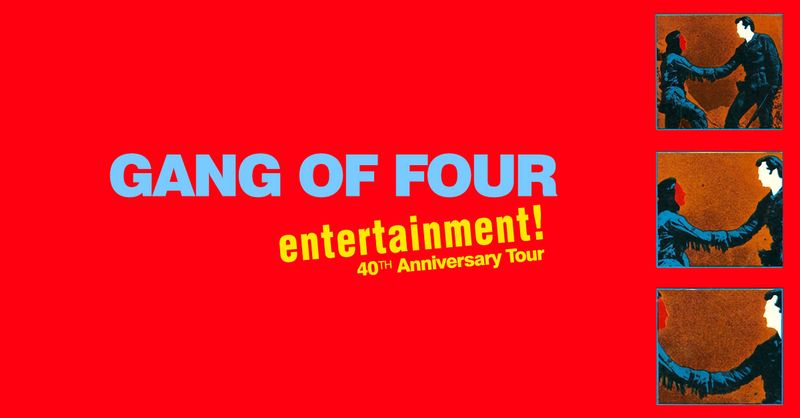 It’s 40 years since Gang of Four unleashed Entertainment! on the world.

Getintothis‘ teenage self had not heard anything quite like it.

We’d grown up with punk as a sound track and was used to guitar, bass, drums thrashing around in one form or another.

The Clash, The Pistols, Buzzcocks, The Ramones and their like had had us dancing around the bedroom in spiky hair and DMs in a sort of Richard Jobson of The Skids style.

High kicking and all – we’d like to think we were quite the mover.

But ‘pure’ punk moved on quite quickly.

It was obvious (at least in hindsight) three chord based shouting wasn’t going to last for very long.

Although, it may be argued The Ramones carried on doing it for longer than was decent, but that’s another story. UK Subs, GBH and some others still do it now, but that, too, is another story.

And we were beginning to see what punk had begat. There were bands who were now taking the baton and running with it, and by some distance.

The likes of Joy Division, Bauhaus and others were starting to develop the punk idea and fanning out into a more nuanced version of the original attitude but with more skill and subtlety than raw anger.

Soon a mate introduced us to a band called The Pop Group. Now, this was a revelation.

A band who didn’t seem to follow any of the norms we were used to.

They messed about with just about everything a song should be.

The vocals were distorted, the rhythms were sporadic, the structure was alien and it was a difficult listen. Yet, it drew us in.

Freedom! – How Scottish music discovered its independence and struck gold

Somehow, their mash of punk, jazz and general noise making seemed like a good fit to our, then, under-developed music taste.

That they were overtly political, too, was not unique, but was certainly unusual.

The venom spat out in songs such as We Are All Prostitutes was the sort of thing that fucked with our teenage brain.

It wasn’t easy for a hormonal teen to compute and rationalise all of this stuff. It seemed like it was happening too quickly.

Getintothis was a little spiky haired punk (at least at weekends) and then, all of a sudden, so it seemed the ground had shifted and the kids had got a bit older and decided their leather jackets were no longer to be used as goal posts. They’d taken them away, along with their ball.

But the changing landscape was, of course, one that needed new pioneers.

Enter Gang of Four. There is no doubt their path had been swept clear by Magazine, PiL and the Pop Group. They were never a punk band; there isn’t a three chord thrash song in their repertoire.

We managed never to see the band live until about four years ago with Andy Gill as the only remaining member at a Liverpool Music Week closing party in Camp & Furnace.

They were brilliant. They always were. We’d just never seen them live before.

There is no band quite like them. It was pushing 2am when they came on stage and we’d not long been off a flight from Turkey. It didn’t matter, there was the adrenaline to keep us going. This was Gang of Four.

The thing we always say about Gang of Four is they understand rhythm. Probably like no other band we can think of.

And that is why Entertainment! grabbed us so much back then in 1979. It was so different and unlike anything we’d heard before.

While we knew The Pop Group were good and challenging and so were PiL, albeit less challenging. Gang of Four were an easier listen.

This was style and class by a band that fitted right into my Sony Walkman playlist.

We would challenge you to listen to Natural’s Not In It and not feel the urge to start shaking your hips.

It’s not dance music, as you may think of it but it just bounces along. It also has probably the most understated lyric of all time when Andy Gill says: “Fornication makes you happy”. [Yeah, we know]. It’s tempered, though, by the antagonistic: “This heaven gives me migraine”.

You’re not quite sure where to look.

The band’s debut single Damaged Goods seemed to get buried in a dead zone as track four on the album, which is a curious decision as it’s the one that shows off their skills the best.

Not just because it was their first release, but because it’s a masterclass in doing the Gang of Four thing.

I Found That Essence Rare is the other song on the album that deserves a shout out.

It’s a furious explosion of political polemic set to the most angriest of guitars mashing between their punk roots and an almost reggae style. It’s a smart move.

Anthrax was another one that just made us wonder how the hell they managed to do it.

There are two vocal tracks going on at the same time, singing different lyrics until, seemingly magically, they start to coincide and form a duet. It blew our mind then and it still does now.

We didn’t know it at the time (who did?) the band were apparently booked to play At Home He’s a Tourist on Top Of The Pops, but the execs at the Beeb didn’t like the line: “And the rubbers you hide in your top left pocket”. The band was asked to change it to “rubbish”.

They walked out and refused to do the show.

We cannot conceive today of an atmosphere in which that kind of childish censorship would even be contemplated. It’s a badge of honour the band should wear with pride.

In the last 40 years the band has, like many others of the same era, undergone line up changes and with that, there’s always a sense that “they’re not the same”.

It’s true in a way, but Gang of Four have kept going. And even if Andy Gill is now the only member of the original line up he keeps the ethos of the band true to their roots.

More recent releases such as 2011’s Content and 2015’s What Happens Next are unmistakable as Gang of Four.

The band still continues to do what it did back in 1979. The sound may have been brought more up to date, but underneath, it’s all there. Right as it was in the beginning.

Our Desert Island Discs list is getting a little cramped, but we think there’s a space for Gang of Four in there.