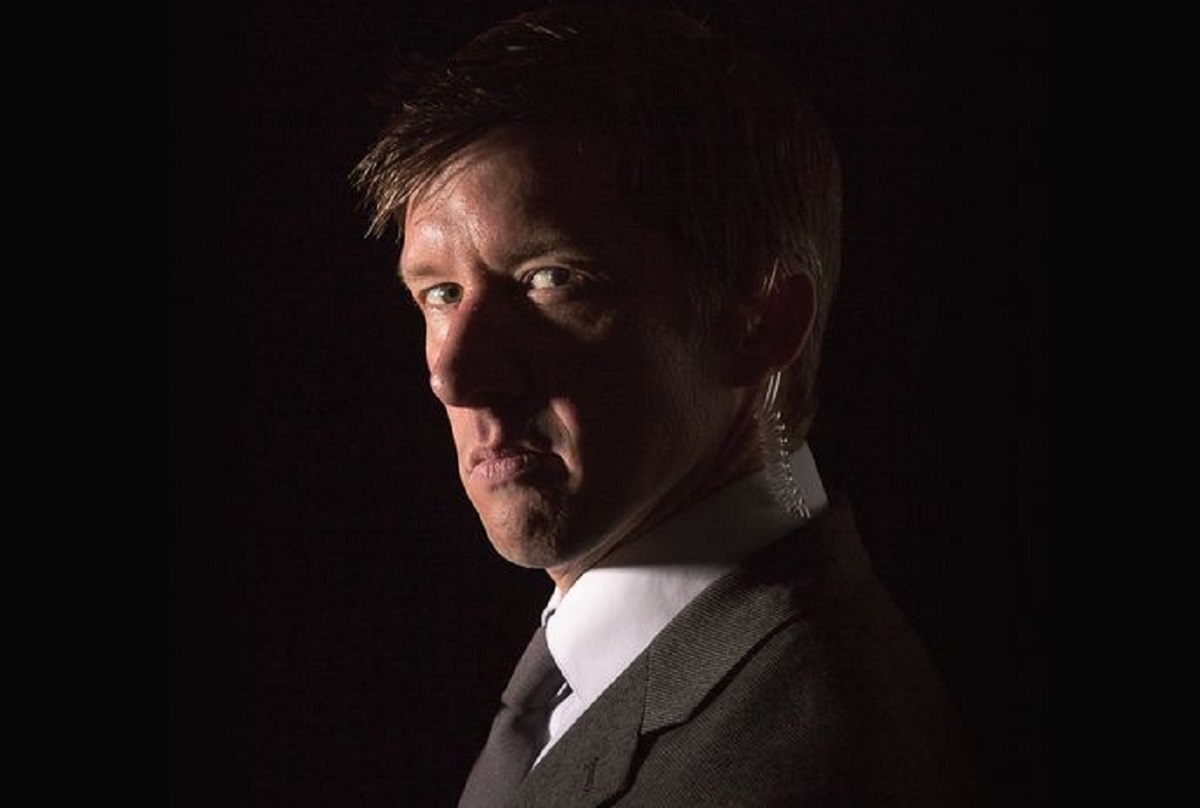 Jonathan Pie is angry.  But this is fair enough, he has a lot to be angry about.

Pie‘s anger though is of a different class.  He is a whirlwind of anger, a seething torrent of invective.  But, crucially, his anger has a laser sharp focus and his targets are, for the most part, perfectly judged.

His Fake News tour sees Pie looking to salvage a career in broadcasting, following a public fall from grace, about which more later.

Before Pie takes to the stage, support JoJo Sutherland wins the crowd over with a neat line in relatable and laugh out loud stories of her life.  She is easy to like and her lewd and crude anecdotes draw perhaps the biggest laughs of the evening.

Sutherland exits the stage to huge applause, the crowd firmly on her side.

Anyone who has interacted with social media lately will be aware of Jonathan Pie.  Expertly played by Tom Walker, Pie made his name with short, bite sized snippets shared across Facebook and Twitter.

Seeing him deliver a full show, though, is a different experience. Pie does not let the pace drop for a second. His rants are delivered at a furious pace and pretty much all of his well aimed barbs hit their mark.

His targets are not always the obvious ones, although Trump, Johnson and Brexit are comprehensively covered. Pie’s humour is also turned inwards and he gives himself as tough a time as anyone else.

That said, it is difficult to tell how much of what he tells us about is a fictional back story for Pie and how much, if any, is pulled directly from the life experiences of Tom Walker. Are the tales of bullying and snippets of home life just there to make us feel some empathy for Pie or does Walker himself bleed into his creation.

The premise for his latest show is that he inadvertently used the phrase ‘fucking spastic‘ on live television and as a result lost his job, his house and his friends and, as a result, is now on an ‘apology tour’ to try to get over his side of events.

This is, of course, merely a plot device to enable Pie to engage in angry diatribes about the world in general.

Maybe there is a limited amount of comedy his conscience will let him wring out of what are deep and troubling subjects. He undoubtedly has the ability to make us laugh at the things that are wrong in our world, but he also has to avoid trivialising them or presenting just their comedic aspects.

It is a difficult tightrope to walk, and the balance must be getting more difficult to keep right. But while we are all happy to pay our hard earned money to be entertained, how many would be keen to do so just to be harangued.

There are of course lots of moments of genuine laughter, but the applause Pie gets seems to happen most when he makes a point that people agree with. He can niftily combine both though, such as describing Boris Johnson as a Milky Bar Kid who was abducted and only recently let go.

It is notable that Pie does not have anything to sell once the show is over; no DVDs or books to sell to his audience, as if his material is so topical that by the time it is recorded and packaged the material will be out of date and the point of watching it would have gone.

But in a world like the one we live in today, Pie is a much needed commentator and satirist. More than this, he crystalises and pins down a lot of our own reactions to the flood of bad news that seems to make up our lives at the moment.

That he can also make us laugh while doing this is a testament to Tom Walker‘s skill and it makes Pie an indispensable antidote to the shitstorm that passes for news these days.

And may he continue to do so as long as the situation demands it.