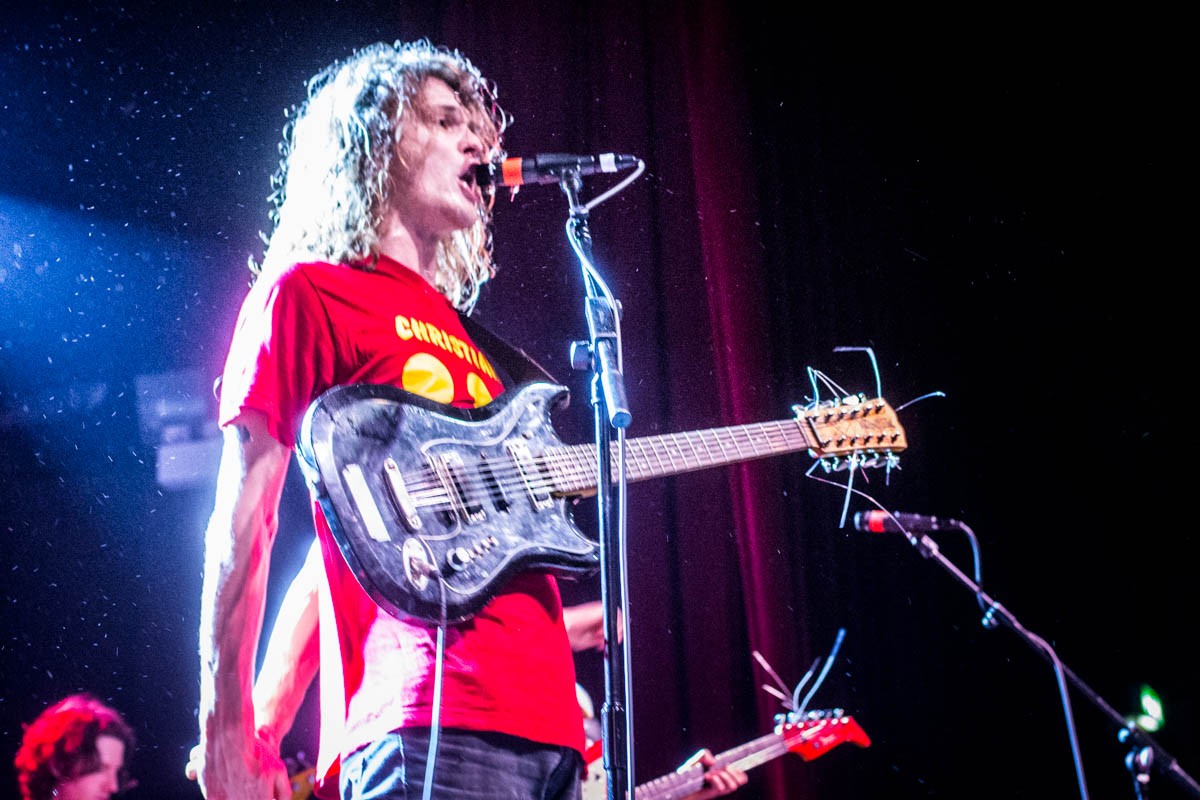 King Gizzard and the Lizard Wizard were joined by Stonefield and ORB to rock the O2 Academy Leeds. Getintothis’ Joel Hanlon looked on from the cheap (and safe) seats.

The band have nurtured a passionate fanbase and a long queue of Gizzheads had already built up hours before the doors opened.

First on were Stonefield, a four-piece rock band from Victoria. The Findlay sisters put on a solid rock show, dressed in matching blue trouser suits with Amy on drum duties and lead vocals.

The early crowd were won over with an energetic mix of heavy, prog and psych-rock.

Next were ORB, and the same cannot be said for them.

Though their music was top-notch, the slow pounding metal felt sluggish and the band were almost entirely devoid of any stage presence.

Between sets, the choice of music piped through the room was remarkable; with songs as diverse as trad-jazz to Tyler the Creator, suitably reflecting King Gizzard’s wild and varied discography.

With the venue full to bursting point and immediately before anarchy ensued, we were treated to the sound of I Feel Love by Donna Summer.

The hour was upon us, King Gizzard and the Lizard Wizard took to the stage; two drummers, three guitarists, a keyboard player and one bassist; Joey Walker greeted the audience, and the boys from Melbourne proceeded to blast out ‘Mars for the Rich’, a massive thrash metal tune from their latest album.

Mayhem ensued and with some relief, we watched from the balcony.

Drinks were flying everywhere, the crowd was a blur of moving bodies, the stalls were for the brave.

Even Stu Mackenzie got in on the action: when he wasn’t playing, he jumped back and forth with his guitar, swinging it up and down and putting it up and around the back of his head.

All performed with unalloyed joy – imagine Bill and Ted’s Wild Stallions, but with talent.

Guitarists Joey and Stu faced each other throughout and shared the responsibility of singing while drummers Eric Moore and Michael Cavanagh were mesmerizing, playing side by side in total sync.

The stage was bathed in red and green light with trippy, glitchy, futuristic visuals projected on the back wall. Their iconic fish-face appearing during Cyboogie and an Earth-like planet during Planet B.

All the while, crowd-surfers bobbed over the moshing hordes.

The moshing hit a peak during Boogieman Sam, with wave after wave of people spilling out in front of the stage, the security had its hands full.

While the drums and bass were a rock-solid foundation, the band frequently changes things up, Stu and Cook jumped between guitars, synths and vocoders and Ambrose took on harmonica and percussion duties.

They even brought out the special extra-fret guitars for Flying Microtonal Banana, nearing the end of the set, Ambrose picked up a wizard’s hat that had been thrown on stage and wore it out to the end, it was also at this point that Stu picked up a black water bottle and soaked the front row.

The band finished with Am I In Heaven and left with no encore, just a nod to an incredible audience.

After a set that veered from thrash metal to boogie-woogie via lounge music and back again, it’s difficult to imagine will KGATLW go next, but given their prolific releases, we shouldn’t have to wait for long to find out.