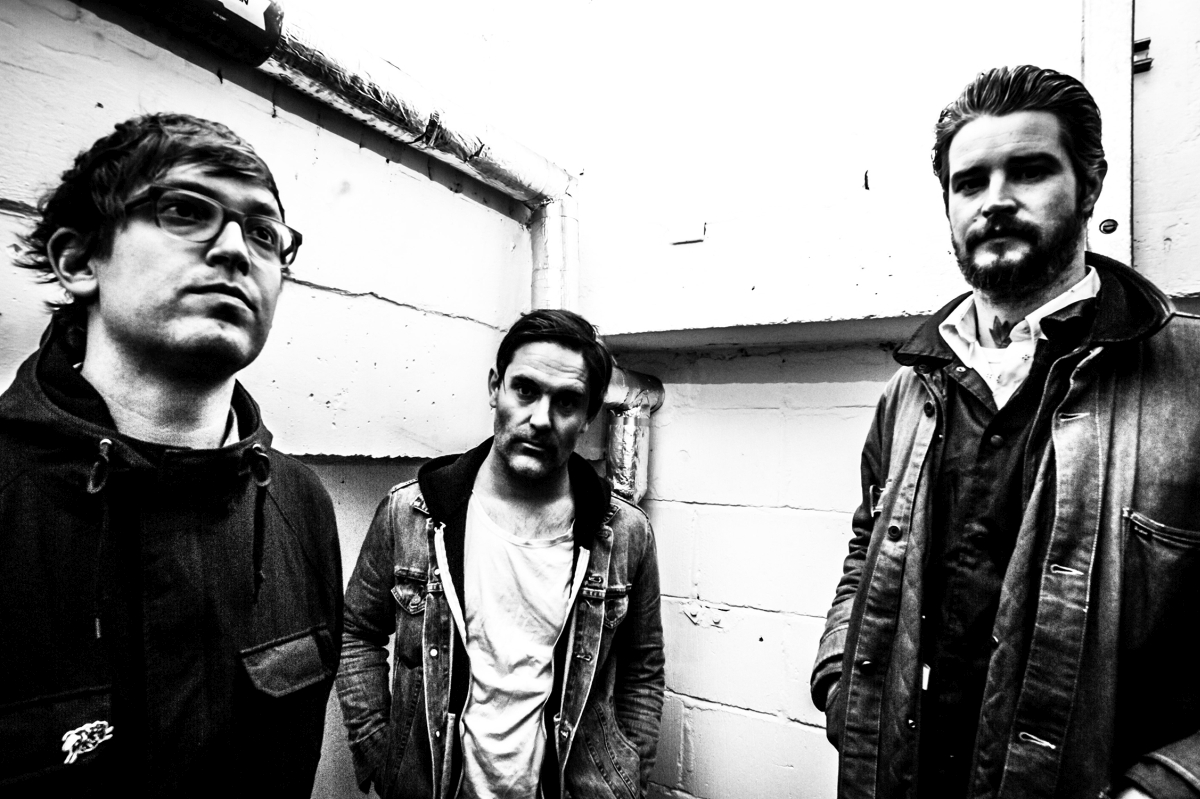 METZ are coming to Phase One; in advance of the gig, Getintothis’ Peter Goodbody spoke with Alex Edkins about Sub Pop, film scores, B-Sides, Steve Albini, and finally getting to Liverpool.

They released their Sub Pop self-titled debut in 2012 and, in the time since, have cemented their reputation as one of the planet’s most exhilarating live acts and trusted providers of bombastic outsider rock.

The band is made up of Alex Edkins, Hayden Menzies, and Chris Slorach.

Recent release, Automat is a collection of METZ non-album singles, B-sides, and rarities dating back to 2009, collected on a single LP for the first time, and including the band’s long out-of-print early (pre-Sub Pop) recordings.

A chronological trip through the band’s lesser-known material. It’s a fascinating glimpse into the evolution of a trio of noisemakers and their development.

It comes as an interesting pause in the band’s otherwise very much forward-looking body of work, so we were interested to hear what the main man, Alex Edkins had to say in advance of their Liverpool gig at Phase One in November.

Getintothis: First question we always ask every band we interview – what are you doing and how’s it going?

Alex Edkins: I am working with my friend Graham Walsh on a score for a film. And it’s going. It’s going.

Getintothis: Are you able to spill any more beans? Tell us which film it is?

Alex Edkins: Can’t do it. But, yeah, it’s been cool, something new for both of us. And Graham is a guy who has helped us make many METZ records, so he’s an old friend and someone who we’ve made a lot of music with. This was kind of a natural thing to do. It’s a nice way to exercise the other parts of your brain.

Getintothis: Is that a bit of a break from the band?

Alex Edkins: Yeah, definitely using different muscles, like different musical muscles, for sure. It’s nice. Although, we’re right in the swing of finishing up the new album, so that’s been exciting, too. We’re really focusing on that and planning to record really soon.

Getintothis: Ah, that’s stymied one of our other questions!

Alex Edkins: Ha! I beat you to it.

Getintothis: Yeah, I was going to ask you about new music, so what’s in the pipeline?

Alex Edkins: Well, LP number 4. We’re almost done writing it. It’s really close and we’re gonna have something out in 2020.

Getintothis: What was the thinking behind releasing Automat?

Alex Edkins: I think it was just the right timing for us to do it. It all stems from the fact that the first couple of things we ever made, way back in 2007, had long sold out and were now being put up online and being sold for pretty extravagant amounts of money, when you consider that it’s just two songs, we figured if people care, if people want those songs then we can make it available to them and we don’t have to [have them]pay an arm and a leg for [them].

It started there and then it turned into something more because Sub Pop basically said, instead of re-pressing some old 7”, why don’t we make it something more substantial?

It turned into that. At first, we were, you know “This is kind of strange to do” But I’m really glad we did it, it feels really good. In a way, I think that music lives pretty well altogether. It’s all kind of random b-sides and early music, but I like the way it came together.

And of course, the reference points are completely different too. So it all depends on where they’re coming from as music fans, so I kind of let people decide for themselves. We never really considered much as to what label we get. I can say that we’re just big music fans across the board.

So I hope there’s a whole bunch of things coming together in the melting pot to make something that’s of it’s own. I don’t know. I think we’ve always kind of stuck out, but people who like heavy music find us to be not heavy enough.

Alex Edkins: Ha! Yeah. And then people who like indie rock or post-punk think it’s too loud. I think we’ve always been a weird entity that doesn’t belong.

Getintothis: Where would you say you have your musical references?

Alex Edkins: Well, I think we come from … the thing we all have in common is punk and hardcore. And then a love of so many other different sounds and styles, but our commonality is definitely early hardcore and Discord Records and stuff like that.

SST Records – I think that what’s got us together in the first place. I can definitely hear it growing from there and going new places. You get comfortable – a little bit more self-assured and confident in what you can do. Your music evolves over time, in a hopefully more interesting way.

Getintothis: So, do we see the music evolving in the new album, then?

Alex Edkins: The songs are more varied. Within the songs, there’s more dynamics. I also think we’re becoming better players. It’s more interesting, more demanding musical pieces. I always joke, because we’re about as Cro Magnon as it gets when it gets to our playing; our compositions are really basic. It’s a kind of a point of pride. I really love simplistic, physical music. But the new stuff is a little more complex.

Getintothis: You had Steve Albini on Strange Peace. What did he bring to the music?

Alex Edkins: He brought his trademark sounds and a real workmanlike approach to making a record. Which was valuable. It was a really good thing for us.

We’re over-thinkers and we’ll nit-pick everything. He’s the opposite of that. He’s, like, play the song, don’t overthink it. Don’t do 100 takes of this guitar part, just do it and you’re gonna get the essence of it, like the first or second time.

That was interesting because that was very much the opposite of who we are as people. We’ll do something until we’re completely sick of it or we’ve gone crazy. I kind of think his philosophy is more than anything what he brought to it.

And it helped us. But he didn’t touch the songs, he wants no part in rearranging the music, he just wants to help you capture it. I thought that was cool and I really enjoyed that process.

Getintothis: Is he working on the new album, or have you got someone else in?

Alex Edkins: It’s not gonna be with Steve this time.

Getintothis: But, you’re not going to say who?

Alex Edkins: Ha! I’m not going to say yet because we haven’t started the process yet. So it would be a little bit [premature].

Getintothis: Have you got the songs written, or is it a case of going into the studio and seeing what you get out of it?

Alex Edkins: No, it’s pretty much like getting everything pretty much damn tight before we go in. [That makes it] quick and cheap and all that. We’ve been working on the songs for a while. We’re feeling good about it. The final touches are right around the bend.

Getintothis: You’re coming to UK in November. How does that sound?

Alex Edkins: Sounds great to us. It’s always been a place that has got behind us. We love coming back every time.

Getintothis: And specifically, to Liverpool. Do you have any idea of what your reception will be like?

Getintothis: What kind of music are you listening to right now, or what do you think we should be listening to?

Alex Edkins: It’s the hardest one. I’m trying to think of what’s on my phone. I’m just drawing a blank.

Getintothis: I know, it’s always a tough one. I hate it when people ask me that.

Alex Edkins: I can’t do it. I should always have them ready.

Getintothis: Anything else you want to declare?

Alex Edkins: Nah. Just, see you soon and looking forward to it. New music coming in 2020.