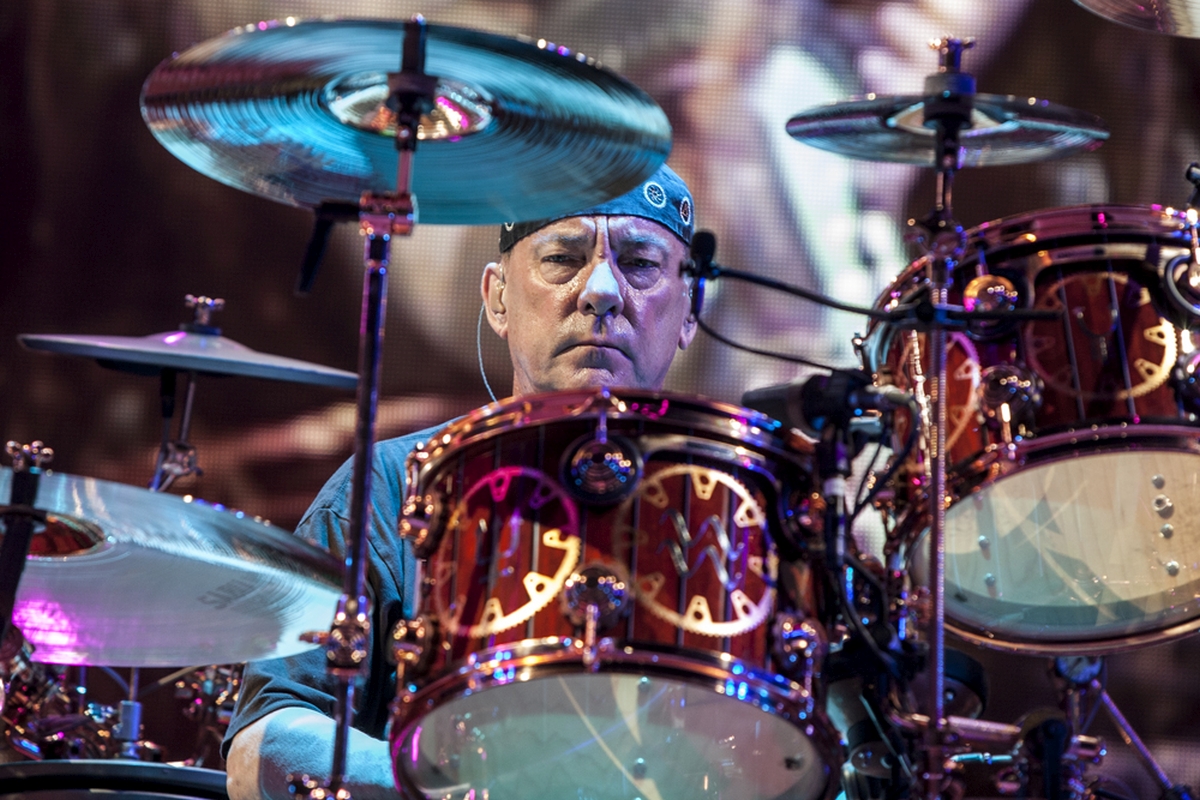 Neil Peart by photo_grafitti is licensed under CC BY-NC-ND 2.0

We should have known all along; Neil Peart had already given us the words we would need.

When the impossible news broke on Friday that the Canadian drummer and lyricist had died, Rush fans turned to his own writing, much of it decades old, to express their grief, find solace and pay tribute.

Words were what set Peart apart. Yes, he was a legendary drummer, fourth in Rolling Stones‘ all-time poll, but he was a writer too.

“Suddenly you were gone/From all the lives you left your mark upon.” The opening line of Afterimage, from 1984’s Grace Under Pressure, was originally written in memory of studio engineer Robbie Whelan.

Years later it became the dedication on the Different Stages live album to Peart‘s own wife and daughter. And now it applies to him.

For Rush fans, especially those who, like me, aren’t musicians, his feats behind the drum kit – or, in his case, drum fortress – are so miraculous as to be taken as read. It was like saying Messi is good at playing football. He was transcendent on a level that the average listener could only admire, not explain.

There is no shortage of evidence – exhibit A is always his solos (the only drum solos I can bear to listen to).

But there is also his style, playing in a trio of virtuosos, always serving the songs and inspiring generations of drummers, both real and air.

Dysgeusia 58: Carcass and Katatonia return, 10 reasons why 2020 will be heavy

Hear him filling the space behind guitarist Alex Lifeson’s own solos with octopoid-limbed dexterity on Red Sector A, The Big Money or Double Agent and try to convince yourself it’s just one person drumming.

The fact that he also provided the words for bassist Geddy Lee to sing propelled him to a different plane. He wasn’t a silent presence lost behind a battery of percussion –  he connected.

Even if you couldn’t count in 7/4 time or didn’t know a paradiddle from a parachute you could relate to his lyrics. It gave him a mighty second string to his bow, on a par with the finest singer-songwriters.

“When I heard that he was gone/I felt a shadow cross my heart.” Another line of eerie prescience from 1993’s Nobody’s Hero, written for a gay friend lost to Aids, now deployed by many in tribute to its author.

Peart‘s death, at the age of 67, after a three-year struggle with brain cancer that clearly only his family and close friends were aware of (he died as privately as he had lived), has hit me harder than that of any other musician, like running into a solid wall of harsh reality.

Bowie and Prince I admired from afar, recognising their colossal cultural importance. I wouldn’t put Peart on the same level but this is way more personal and the outpouring of emotion suggests he was every bit as admired and loved.

Friends who really don’t like Rush got in touch with me. There are calls and petitions for plaques, statues, recognition at the Grammys.

The Toronto Star said his loss was on a par with Hendrix or Cobain which, even allowing for some hometown Canadian bias, is an extraordinary comparison.

The lyrics which I turned to and which broke me when I listened to them again on Friday were from 1982’s Losing It, an achingly beautiful elegy to the decline of creative faculties and inspiration.

In this hidden Rush gem, not played live until their very last tour, Peart has Lee sing: “Sadder still to watch it die than never to have known it./For you the blind who once could see, the bell tolls for thee.” I’m welling up even now.

To my mind it was a critical turning point for the group. They’d come up with low-key songs before but nothing quite as personal as this, a far cry from tales of warring gods or black holes. Was he aware of his own inevitable deterioration when he wrote it nearly 40 years ago?

In the Seventies, Rush had laid down the clichés that would become shorthand ways to describe and often dismiss them – Lee‘s high-pitched vocals, the kimonos, the double-neck guitars, the 10-minute compositions.

And Peart, magpie-like, raided Tolkien, Ayn Rand, Coleridge, Jung and Shakespeare for lyrical sparks. But as Lee and Lifeson streamlined their music at the start of the Eighties so he turned to face the real world and also in on himself.

Yes, he could be verbose, clunky and opaque, even pretentious at times. And his early devotion to Rand, a poster girl for the libertarian right which was enough to earn accusations of proto-fascism from the NME in the mid-Seventies, never sat well with me, even if it did give the world 2112.

Peart later explained it as a youthful infatuation and, anyway, the music weekly’s claim was baseless and deeply hurtful to the band (Lee‘s parents were Holocaust survivors).

His writing was shot through with positivity, a questing mind, a wonder of life and his sheer humanity. “The most endangered species – the honest man,” he promised, “will still survive annihilation.”

And his words have permeated my life: as a teenager I learned the phrase “plus ça change” from him; I’ll happily drop lines like “diamond in the waste” into my own work; and whenever I’m on a crowded city street I think of “headfirst humanity“.

While Peart was usually more personal than political, Witch Hunt from 1981 is a tirade at the Farages of this world, against censorship, intolerance and xenophobia.

And in Territories, a Canadian wrote the perfect retort to Brexit, 30 years before we heard the word: “Better the pride that resides in a citizen of the world/Than the pride that divides when a colourful rag is unfurled.”

In Mission, from 1987’s Hold Your Fire, he returned to the subject of creativity and the price paid for it. The lines “If their lives were exotic and strange/They would likely have gladly exchanged them/For something a little more plain/Maybe something a little more sane” are a companion piece to Losing It’s “Some are born to move the world, to live their fantasies/But most of us just dream about the things we’d like to be.”

To any fan Peart‘s life most definitely appeared to be exotic and strange and he’d gone a long way to moving the world. But this humble, self-taught son of a farm machinery dealer wrote from the point of view of the listener – he put himself squarely in the shoes of the ordinary person.

There are some little ironies and neat contradictions surrounding his writing and his relationship with Rush‘s fans. The man who wrote “I can’t pretend a stranger is a long-awaited friend” (from Limelight on Moving Pictures, the 1981 album that catapulted the band to the very success Peart was so wary of) had countless friends, whether he liked it or not.

And many fans, for the best possible reasons, have invoked God/heaven/prayers to acknowledge an avowed atheist. Songs like Freewill, Roll The Bones and Faithless leave you be in absolutely no doubt as to his views on the existence of a deity or guiding hand in our lives.

He did have a spiritual side though, often marvelling at the otherworldly in nature. Mystic Rhythms, Presto and Earthshine convey this with varying degrees of success  while it sometimes led him into twee territory – Tai Shan, about a trip to China, is possibly the most unloved song in the entire Rush canon.

I saw Rush 25 times between 1983 and 2013 and the nearest I got to Neil Peart was front row at the Sheffield Arena in 1992 for the Roll The Bones tour, so close to the stage that we could hear the music through the monitors as much as the PA.

I swear I locked eyes with him a couple of times but his was a thousand-yard stare, lost in some preternatural state of concentration.

It would be 12 years before Rush came back to the UK during which time his daughter Selena was killed in a car crash and first wife Jacqueline succumbed to cancer (Peart was certain she had died of a broken heart).

His near-miraculous return to the band and to playing live again gave us four more studio albums and six Rush tours, four of which crossed the Atlantic to Europe. There are surely parallels with Nick Cave‘s own resumption of recording and performing following the death of his son.

The first of those albums was 2002’s comeback Vapor Trails with his most personal lyrics of all. In song after song Peart addresses his tragedies and recovery while at the same time making the themes universal.

It will be forever one of my greatest regrets that I didn’t go to America five years ago for what turned out to be their final tour before Peart was forced to retire from drumming, as a man in his sixties now unable to meet the nightly demands of what he described as being like running a marathon while doing maths equations.

Perhaps that is the greatest sadness in his death, that he had so few years to enjoy retirement with his second wife Carrie and their daughter Olivia.

One final lyric to quote, from 1985’s Marathon: “You can do a lot in a lifetime/If you don’t burn out too fast/You can make the most of the distance/First you need endurance/First you’ve got to last“.

Rush‘s greatest strength was their endurance; they adapted, they evolved, they stayed interested and interesting, and they just plain hung on in there, on their own terms, carrying their fans with them every step. They were the victors in rock’s greatest tortoise and hare race. They lasted.

And Peart‘s immense contribution will last too, living on in their music.

But I have always pronounced it ‘Pert’. Sorry, Neil. And thanks for it all.