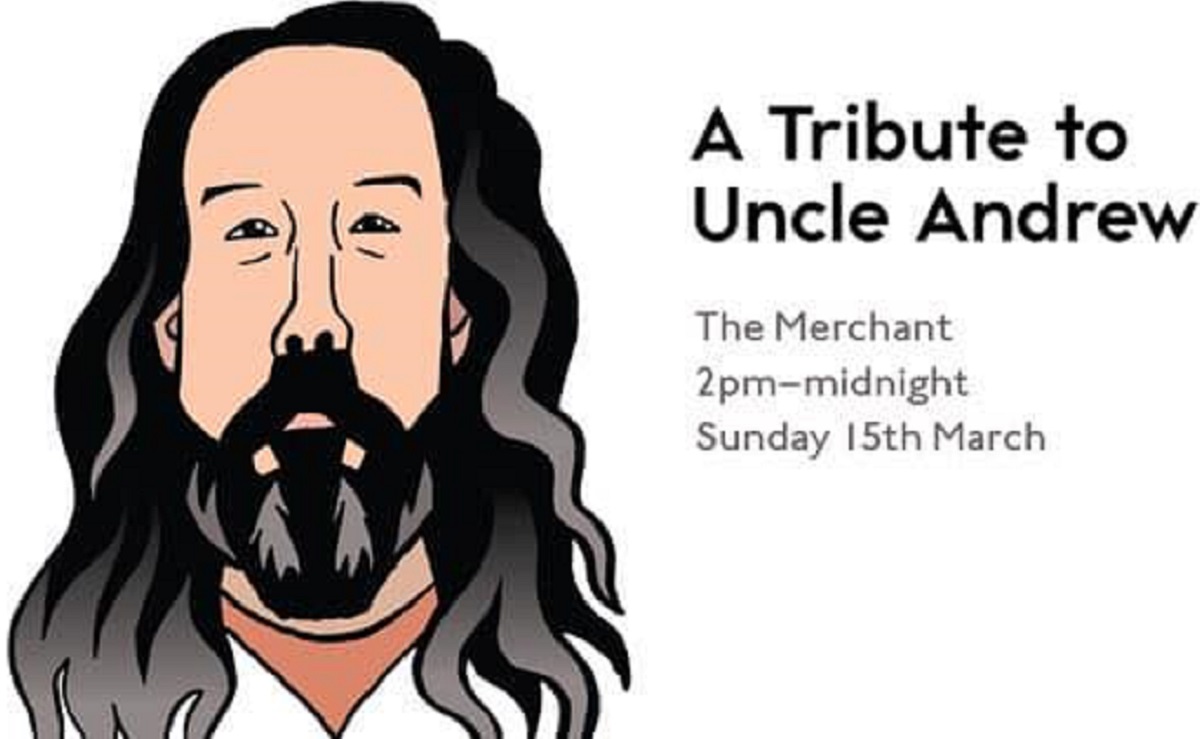 A Tribute to Uncle Andrew. Artwork by Pete Fowler

Still reeling from the tragic death of Andrew Weatherall, Getintothis bring news of a tribute night along with a top ten of his best tracks.

Andrew Weatherall was an inspiration to many people, not least for his love of music, his good taste and, perhaps most of all, for his adventurous and charming personality.

He has played in Liverpool many times, stopping off in Cream, Voodoo and other dens of ill repute during his many years of DJing.

During that those years, he forged a friendship with local legend Bernie Connor, who says “I’d met Andrew a few years previous, we’re almost the same age, we bonded through a mutual love of pretty much exactly the same things at exactly the same time in our lives. We’d become good friends.”

Such was the friendship between the two that Bernie‘s children had grown up calling Weatherall ‘Uncle Andrew’.

To pay their respects, Bernie is now helping to arrange a night at The Merchant in Liverpool. The event is called, touchingly, A Tribute to Uncle Andrew.

Running from 2pm to midnight on Sunday March 15, the event will feature sets from many DJs and performers, including Bernie Connor, Buddy S Keenan, Joe McKechnie, Dave Haslam, Richard Norris, Steve Proctor and DJs from Voodoo.

The event information reads ‘Joe and Buddy present A Tribute To Uncle Andrew at the Merchant. We pay tribute to our much-loved friend and wayfarer. We’re free all day. Be with us.’

Getintothis will provide further information once we have it, but until then, browse through our Top Ten Andrew Weatherall tracks and marvel again at the breadth and scope of this man’s music. -Banjo

Andrew Weatherall: “the epitome of the best of his generation”

Primal Scream – Loaded
There are plenty of remixes which redefine the original song but not many versions are given a whole new name and identity.

Loaded however is something else, bridging the divide between rock and dance; it was the clarion call for a generation and a crossover smash. It still sets a million pulses racing almost 30 years to the day since its release.

Only the man who created Loaded could’ve created the version of Come Together which ended up at the heart of Screamadelica. This, as much as any Weatherall production, typifies that early nineties freedom and spirit to try anything and see if it works. And work it does. In spades.

Oh, and the original is on last year’s Maximum Rock ‘n’ Roll compilation.

Saint Etienne – Only Love Can Break Your Heart (A Mix of Two Halves)
When musical tribes still roamed the land like Mods and Rockers, one place where indie fans, rock fans and dance fans tended to down cudgels was over a mutual regard for dub.

And Weatherall knew dub as well as anyone. Saint Etienne’s Neil Young cover had its original bassline turned up and a meandering Augustus Pablo-esque melodica threaded through the first half before the DJ eased a spliff from his lyrical lips and smilingly ordered “cease” and the more familiar version of their debut single springs into life in the second half.

One Dove – White Love (Guitar Paradise Mix)
One Dove’s Morning Dove White is a proper lost gem of an album, but also a frustrating case of what could have been had production duties been left at Weatherall’s fingertips as was originally the case.

It’s easy to spot which tracks he produced and just as easy to spot the ones he didn’t. But for the dedicated crate digger plenty of versions which failed to make the long player did make it out on B-sides and limited editions and all are worth the hunt.

White Love boasts proper rock riffs and howls of feedback and then Dot Allison’s breathy vocals gently wipe them away and we get that trademark Weatherall spaced out, dubby dance.

My Bloody Valentine – Soon (Andrew Weatherall Mix)
When the NME set itself the unenviable task of compiling The 50 Best Remixes Ever back in 2011 Weatherall’s version of My Bloody Valentine‘s Soon came in at number one, a full 21 contender filled years after its release.

Top of the pile. The greatest remix ever. Even better than the one you’re thinking of.

And for a time you could pretty much name your price for a copy on 12 inch vinyl such was its desirability.

Getting the ultimate in shoegazers to whip on their dancing shoes was some achievement.

Sly and Lovechild – The World According To Sly and Lovechild (Soul of Europe Mix)
House music with a big nod to the Chicago sound which cleared the way for the acid revolution from the mid-1980s.

An underground hit, this opens with a sample of a speech which sounds very like it might be Jesse Jackson again and then spins off into classic house territory.

If anyone asks you what dance music sounded like at the time, play them this.

James – Come Home (Skunk Weed Skank Mix)
The song that launched a million t-shirts was among the early pioneers spanning the gap between eighties indie disco and the emerging rave scene by the time Weatherall had finished with it.

The original’s refrain is honed down to become a klaxon which runs right through as the single is chopped up and scattered about, with James Brown’s Funky Drummer making an appearance at one point.

On musical merit it might not make a top ten but on its significance to what was happening to music in 1990 it’s right up there.

Happy Mondays – Hallelujah (Club Mix)
But unarguably not as emblematic of the era as this bona fide masterpiece.

It would be doing a disservice to the Happy Mondays to say this was the one which made them but it certainly gave them the platform they deserved. From the opening call to arms this is a timeless classic right up on the podium with Loaded. House pianos, Gregorian chants and then Shaun Ryder mooches into his own song.

A marriage made in DJ heaven with the other gold standard remixer of the time Paul Oakenfold sharing production duties.

Jah Wobble and The Invaders of The Heart – Visions Of You (The Secret Love Child Of Hank And Johnny Mix)
Another marriage of the made in heaven variety. The dub bass of Jah Wobble in the hands of a man who knows his dub basslines and just how high up in the mix to ramp them.

To the original’s world music vibe of sitars and the like Weatherall adds a military drum pattern and a welter of organ riffs. Not the most likely of instruments to bring to this particular world party but it’s brilliant.

And Sinead O’Connor on vocals too.

Primal Scream – Uptown (Long After The Disco Is Over)
Another Primal Scream track would be a lazy addition to any top ten if this one hadn’t flown so far below the radar at the time coming almost two decades after the other releases mentioned here.

Uncredited and unmistakably Weatherall, this was a B-side from 2008 with the DNA of the early nineties remixes.

It starts in the same Uptown where King Tubby met the Rockers and ends with a stab of Midtown Manhattan disco of the 1970s.

There’s melodica, tom toms, plenty of strings and synths in a throwback to the sound the remix supremo blew the indie disco apart with 18 years earlier. 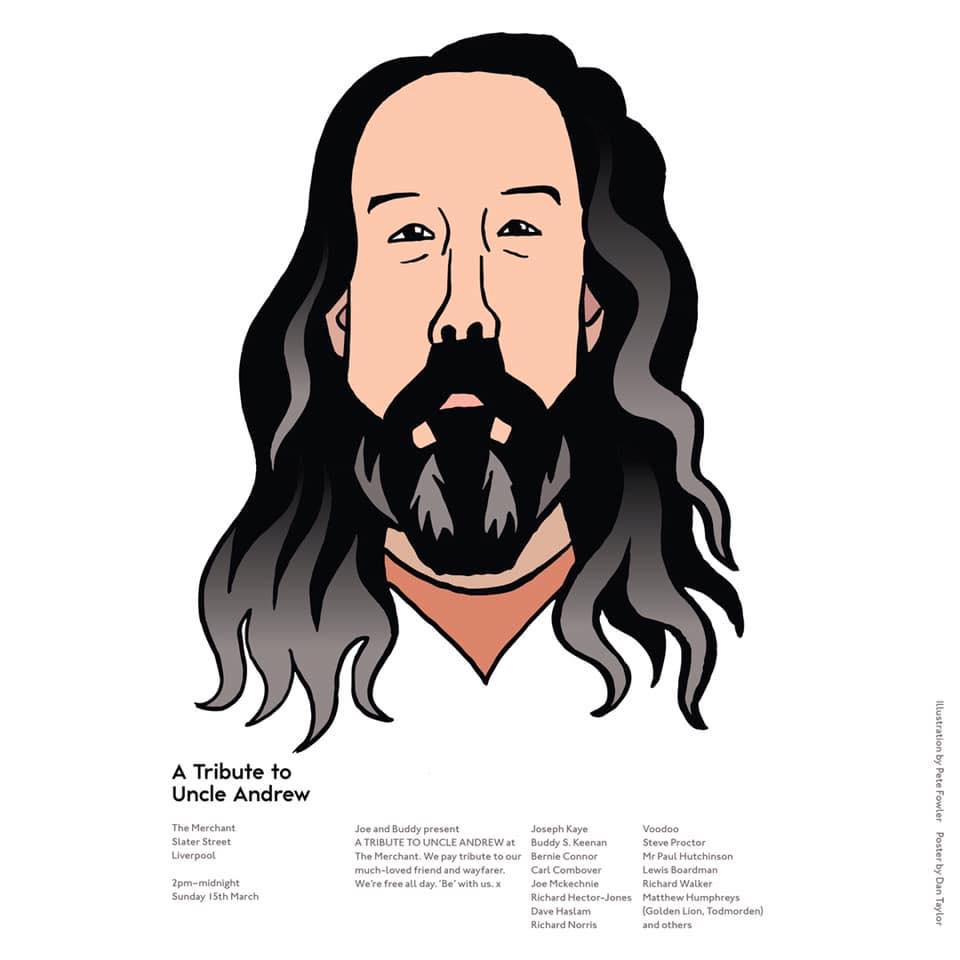