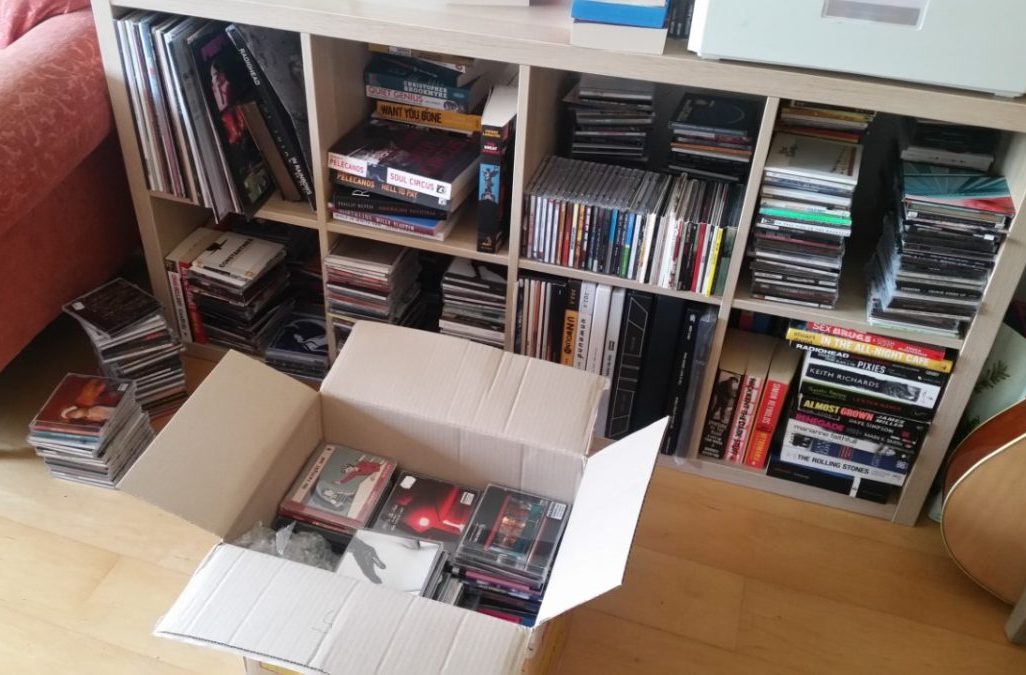 Amid self-isolation Getintothis’ Simon Kirk strikes gold as he shares a personal story about the importance of a collection.

Various authors of these pages have spoken about getting shot of their record collections.

Friends, too, of course.

Like everything, there is another side to these things.

Having moved from Australia to Merseyside three years ago, rather than parting with acquired treasures, I took the decision to bring my collection with me.

Many sleepless nights were had thinking about how the collection, my vinyl in particular, would fare during the arduous journey.

Would it survive six months in a shipping container across various locations? At least half of that time in 40 degree heat?

Cutting a long story short, don’t worry about what people tell you.

As long vinyl is packed correctly, even though there was an element of shock to realise this, the survival rate is quite favourable.

While the vinyl and many unread books were unpacked as soon as they were back in possession, the majority of my CDs remained untouched.

A lot of these releases were either ripped from CD to iPod (remember them?) or stored on one of the countless external hard drives that also made the journey. So, from a volume point of view, the music was still within arm’s reach.

However, without the physical result, there can be a hollow element to the whole experience. That may be taking it a bridge too far for some to consider, but just bear with me.

Even despite this, two weeks before the lock-down and I had fleeting thoughts of binning off most of my possessions. Clothes, CDs, vinyl, toothbrush…

To quote Simon Reynolds – rip it up and start again. Foolish thoughts, no doubt.

Fast forwarding three weeks from those ridiculous thoughts and as for many others around the world, there was a lot of reflection swirling around for obvious reasons.

Self-isolating on your own, well, it tends to send you a bit mad. From time to time, your mind wanders to the point where you are gently nudged towards things you wouldn’t normally do.

While people were engaging in live music streams, Tim Burgess’ Twitter Listening Party, virtual Zoom piss-ups, posting nostalgia about gigs on Facebook and spending dead time scrolling through countless YouTube videos, none of these things really appealed to me. For whatever reason, they still don’t.

Each to their own, of course. My take on self-isolation has been a bit different to most.

If you’re going to do solitude, then do a good job of it.

After a cautious glance towards the stacked boxes in the corner of my bedroom, something sparked.

“Time for a family reunion…”

And what a reunion it was. An experience consisting less of exploring a dusty rabbit warren and more of a golden grotto in pursuit of forgotten treasures.

“I was thinking of binning these off? You fuckin’ idiot.”

Something must have been in the air that day because I had two separate conversation with friends who were also doing similar things. Back and forth messages ensued about these whimsical epiphanies and before we all knew it, the day turned out to be a really good one. A small victory of sorts amid these bizarre times.

So after inspecting these boxes, sorted alphabetically and labelled as CDs 1, 2, etc. I reached for number 3. What greeted me?

None other than my collection of shiny discs from The Fall.

From there it was like being a kid in a sweet shop. I found myself not only with Mark E. Smith, but Fugazi, The Constantines, my Dirty Three collection, which had been sporadically scattered from one corner of the room to the other for years, finally reunited. Countless others, too, of course.

Then flicking through the elusive letter “M” where you don’t seem to have as many artists as you think you should. Those artists beginning with “S”, however, make up for the shortfall.

After scavenging through the boxes the obvious question was what to listen to? 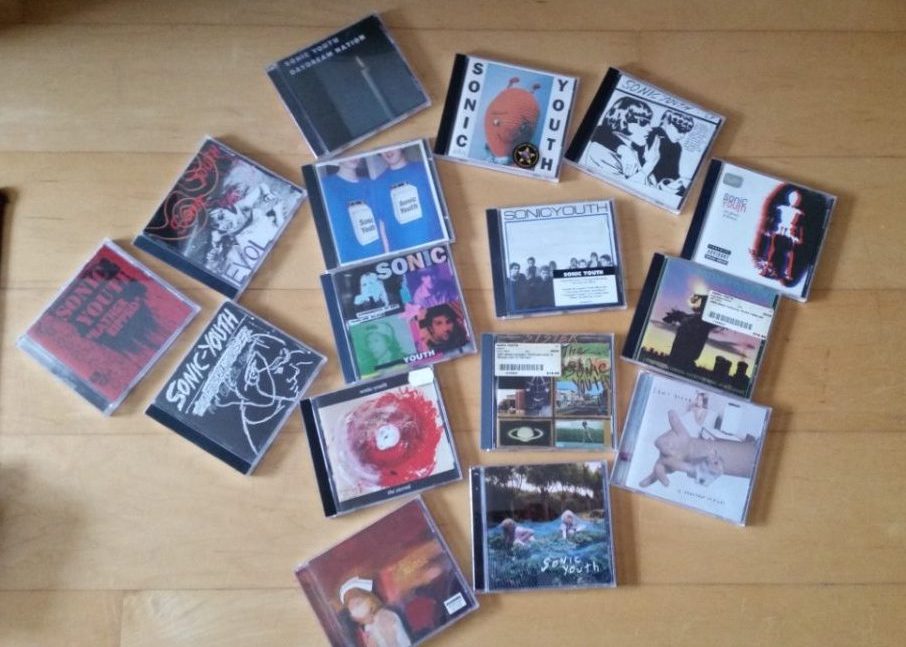 Renewing the vows with Sonic Youth

It was the perfect kind of nostalgia. Not like talking to your mates in the pub about past glories.

To gather your thoughts and let all those memories that have been buried away in the corners of your mind slowly ferment and rise to the surface.

The journey stirred up all kinds of memories. Once-buried impulses of sadness and joy in equal measure. Past outlandish summations on particularly albums both good and bad.

The realisation that The Dandy Warhols‘ Welcome To The Monkey House was and still is a decent album.

The realisation that the Smashing Pumpkins‘ Adore is the band’s album that stands up the most and irrespective of what you may or may not think about Billy Corgan, the album’s a stone-cold masterpiece.

The fact that I no longer have to spend eating meals alone. Miles Davis‘ Kind of Blue and the Dirty Three‘s Cinder provide the perfect company.

And then there was The Constantines. How they weren’t not something bigger than they were? For that matter, throw the mighty Seam into that equation, too.

Then there was a ludicrous hankering for Victoria’s finest, and only, bitter after getting your head blown off by the Beasts of Bourbon‘s The Axeman’s Jazz. Of course, this taster led to an evening with the Cosmic Psychos.

What about Sonic Youth‘s final album, The Eternal? It wasn’t the runt of the litter that it was made out to be. This is a band that produced NYC Ghosts & Flowers, after all…

After previously misguided enthusiastic belief that The Stooges The Weirdness wasn’t that bad … in truth, it’s a mangy hound and always was. Something that The Walkmen‘s You & Me is not which only took 12 years to finally realise.

Even Kylie got involved. Never mind that it was a Christmas album. At this point, it sure felt like it, so I thought, why not? It would have been quite un-Australian had she not been invited to this little soirée.

I could go on but I suspect you’ve heard more than enough, however I will share the greatest triumph from this shindig for one. 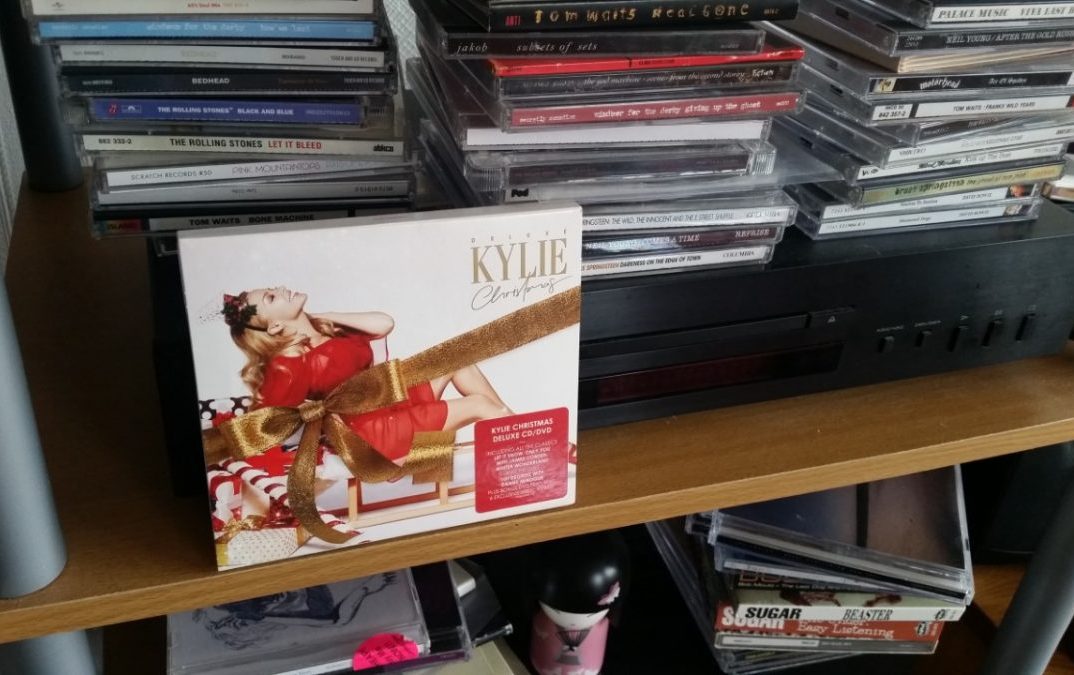 Looking at the inner sleeve made me laugh profusely. My late wife always laughed at the utter ridiculousness of it all.

“What the fuck was Mark Arm thinking?” she used to say. Every time.

Then hearing her sing the part in A Thousand Forms of Mind “Get behind meee/stand baaack all you deviiils” – atrociously too I might add – illuminated those fond memories.

In truth, she wasn’t even a big Mudhoney fan.

That’s music, though. Certain lyrics stick in your head no matter who the artist may be. They probably would have passed her by had it not been for those hilarious inner-sleeve photographs.

My point in all of this?

You can’t yield these same emotions from an intangible experience like streaming. You just can’t.

I mean, they call it a “service”, for heaven’s sake. A term conjured up by some deep-pocketed coked-up marketing executive, no doubt.

Not only that, but the mind casts back to when and where these treasures were purchased. Over 1,000 CDs, I can remember when and where I procured most of them. 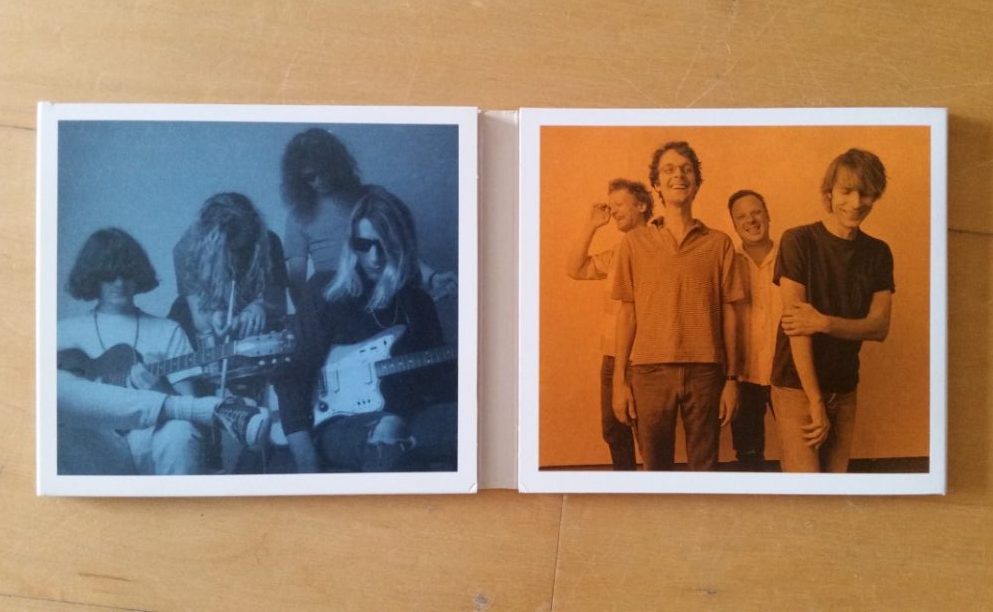 Mudhoney and that photo

That’s the beauty of it all and while I get streaming and even partake regularly in it (a backtracking into American Music Club thanks to Banjo‘s brilliant Lost Albums article proved very fruitful indeed), but – and pardon the irony here – the experience of delving into your own physical collection leaves streaming for absolute dead.

Thom Yorke once said that Spotify was the last fart from a corpse and he was right in a sense. The emotion of art has been reduced to your smart phone. No one wins here, neither artists nor those who indulge in their creations.

People treat CDs with grave contempt. ‘Arl arse’. Not fit for a drink coaster. I could go on.

It’s not even about that, though. It’s about the emotions that the physical product can evoke.

It doesn’t have to be CDs. People could be without vinyl or books for just as long and it would stir up the same sentiments I felt when rummaging through a collection that had grown estranged to me for the last three years.

Being in the company of the physical product makes you spend more time with it. The liner notes. The artwork. What does it all mean?

They say minimalism is the new maximalism.

Granted, clutter isn’t the way forward. Far from it, in fact. After all, no one likes a hoarder. Do they?

It’s providing a certain character to your own environment and enhancing comfort in your own space. Collections of any kind are the essence of what makes a person them.

While harbouring thoughts on whether I needed these CDs in my life, well, perhaps the subconscious was nagging away, hence why I took the decision not to part with them. Perhaps a part of me would have died had I done so.

There’s always a fear of walking into a house where the walls are grey, there are no books or vinyl, or whatever. Just a coffee table and a smart phone.

That’s what we have come to in this new age and it’s been coming for the last 15 years. Whether mass culture has sleepwalked into this existence or been bullied into it. Well, perhaps that’s a discussion for another day.

I have a degree of sympathy for the new generation who will neither have the opportunity nor the desire to indulge in past times like these and part of the reason, in my opinion, is based on social-conditioning into the attitude of instant gratification. A new disposable culture we find ourselves entangled in.

Which makes me cast my mind back to my friends who have got shot of their collections. Dare I ask, how does it feel now?