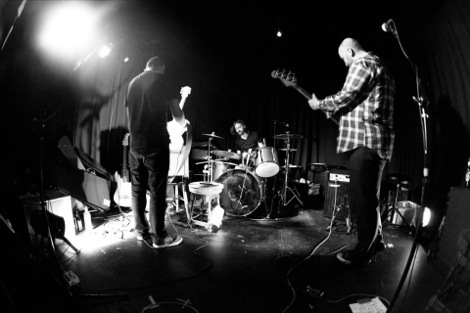 So here we are back at Mello Mello for the fourth installment of Rekordmeister Music‘s Used Vinyl Club.
In previous chapters we’ve been treated to the joyous noises of Puzzle, Elle S’appelle and 28 Costumes – all veritable veterans of Liverpool’s indie rock scene (or indie pop scene depending on your own personal stance), but this time round it’s the chance for some new kids on the block to have a crack and we’re here to see DoubleDoublePlusGood‘s debut performance.
First up though, Getintothis is treated to a dose of Meow Meow, who are a three-piece act brandishing some great twee-indie-pop songs in the same vein as Dressy Bessy.
You’ll recognise the guitar player as Mark Magill from Liverpool thrash-heads SSS and Down and Outs.
Meow Meow‘s songs are breezy and summery affairs but unfortunately tonight they only really seemed to get out of first gear towards the end of their set; a set which for the best part was ramshackle and slightly underwhelming. That said, they are perhaps best represented by the four enjoyable songs that appear on their split EP released tonight. 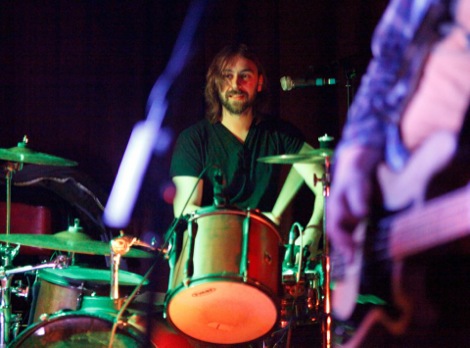 Andy Donovan of DoubleDoublePlusGood at Mello Mello
Incredibly monikered, DoubleDoublePlusGood are, in their own words, ‘Tony Keenan, Graham Jones and Andy Donovan – the worst bits of Tokyo Adventures, Voo and Elle s’appelle trying their best!‘ and tonight is their first live performance to celebrate the launch of the aforementioned EP – a split with the Meow Meow.
They launched into opener, The Losing Side, a big, fat, chugging riff that explodes into life before singer-guitarist Tony Keenan begins with his brilliantly earnest yet witty lyrics.
North Career is drenched in harmonies throughout; the line ‘…punish those that seek out the punishment‘ having a three-parter that Queen would be proud of while also showcasing bassist Graham Jones‘ and drummer Andy Donovan‘s impressive multi-tasking skills!

It’s somewhat of a powerhouse performance and calls to mind bands like Husker Du, Guided By Voices and perhaps most obviously, Weezer.
Keenan has an obvious knack for writing the type of lyrics that make you wish you were dead good mates with him and got to go to the pub with him; witty, sad, self-deprecating and wonderful, all qualities demonstrated perfectly in Bag For Life: ‘Day fades into night/10 Celcius 15 Farenheit/Tea and television shows/I’m the jelly in your mould/I can semi-skim your soul‘.
DoubleDoublePlusGood are, for now at least, our favourite new band.
We have some vague recollections of karaoke happening after the bands had finished and we also might have some vague recollections of participating in some way… No, surely not. 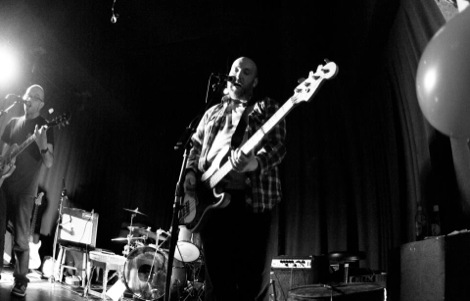 Graham of DoubleDoublePlusGood at Mello Mello