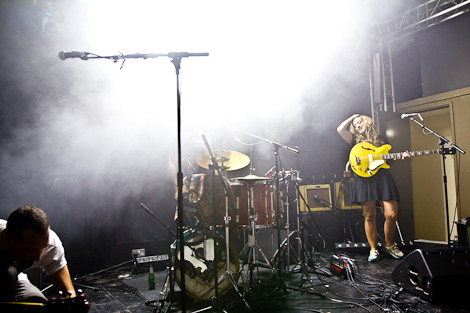 Stealing Sheep and All We Are provide a snapshot of Liverpool’s revitalised music scene, Getintothis’ Neal McGrath gets up with the Diazepam pop.

The Bee Gee‘s on Diazepam apparently.
That’s what Getintothis had been lead to expect from Liverpool-based trio All We Are, and while it would take until the last song to realise their self-proclaimed description there was much to enjoy in the meantime.
Obviously well versed in the lost art of setlist writing, Guro Gikling, Richard O’Flynn and Luis Santos get better and better as the show went on, combining dreamy psych melodies and complex rhythms with tasteful, dexterous and at times, almost jazz-like guitar playing. 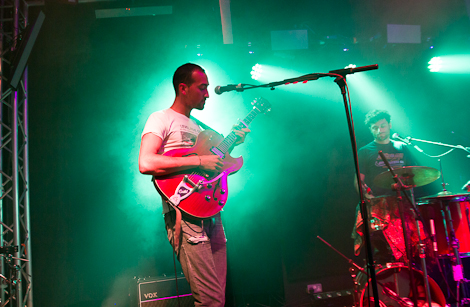 All We Are’s Luis Santos at East Village Arts Club
Their main selling point, however, was their firm grasp of dynamics – taking the audience on a musical journey full of peaks and troughs; always knowing when to hold back and when to let fly.
Their set ended with the superb calling card, Utmost Good, a brilliant slice of ‘Bee Gee’s on Diazepam’ pop – catchy as hell and leaving the room wanting more.
Stealing Sheep, one of the finest musical exports from a city currently ripe with burgeoning talent, waste no time proving that they are just as an exciting live prospect as crafters of clever, intricate albums. 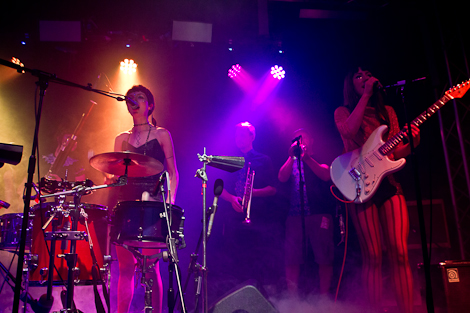 Stealing Sheep at East Village Arts Club
Weightier than on record, Lucy Mercer‘s drums rose thunderously to the fore making up for the occasional disappearance of the high harmonies, adding musical backbone to her visual charisma.
She is one of three front women in the band, grinning exultingly as she swats at her kit, with Rebecca Hawley and Emily Lansley completing the trio, who bewitched like three high priestess’s off on their holidays.
Their sound, a mix of psychedelia, British folk (indeed some of the vocal inflections ought to put a knowing smile on Nic Jones‘ face) and pop, was augmented by a group of extra hands in the shape of The Harlequin Dynamite Band for certain songs – a percussionist and a trumpet player among other instrumentation. This group was welcomed back each time they hit the stage helping them fill out the sound wonderfully.
Genevieve, taken from their superlative debut Into The Diamond Sun, was a stand out; the band never losing their grip on their pop sensibilities for any length of time (as much as they might threaten too) before ending with a triumphant Shut Eye.
The night almost felt like the closing of Chapter One for the Sheeps, and what future riches await are a tantalising prospect – yet in All We Are, we find another Liverpool band just starting out on theirs – an evening capturing and delivering for a city in fine musical fettle. 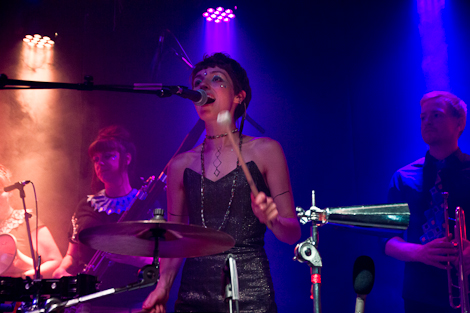