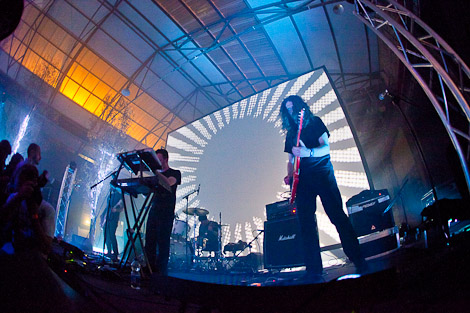 Three boss music events this weekend wrapped up in one Getintothis blog sandwich. Wrap your eyes and ears round this lot.

We’ve only been up and running a week after our mini summer interlude and it feels like we need another breather.
So much music info is bursting inside the email inbox that it’s threatening to jump out the screen and throttle us…
Anyways, in order to lighten the load we’ve compacted a wee round up of three happenings which deserve your attention – all of which unfold this weekend. One each day, which is handy. Or maybe will just have you completely burnt out come Monday.
You choose. We won’t be staying in.
Everisland Garden Gathering at Kazimier Gardens – Friday September 6, 6pm-2am
Everisland, one of Liverpool’s bright young music promoting teams & GIT Award judges, return with their awesome Garden Gatherings at the Kazimier.
Pitched somewhere between faery enchantment, woodland village, musical voyage and general social knees-up, the Garden Gathering focuses on arts, creativity and live music.
On stage are Merseyside regulars Natalie McCool and Silent Sleep plus newies The Good Host and Other Earth.
A stellar night of music is wrapped up by Waxxx DJs. Should get lively.
Details.
Mugstar at Drop The Dumbbells, Slater Street – Saturday September 7, donation only
Drop The Dumbbells has shaped some of the most intriguing, confrontational and wilfully avant-garde art and music for sometime – and this weekend it shuts.
Or at least we think it does. Who knows? See, that’s the best thing about ‘Dumbbells. There’s no rules and no boundaries. It all seems put together by friends and like-minded individuals with one eye on DIY and another on making sure there’s enough good stuff so that it can be enjoyed by anyone.
From noise gigs to comic book art exhibitions to electronic gigs and poster sales the team make it happen for the sheer abandon of ‘doing something’.
Saturday sees one of Liverpool’s finest bands, Mugstar take to the stage. It will be loud. It will be on way into the night. And it will be amazing. It maybe the end of Dumbbells.
Details.
The Farm and guests at Stanley Park – Sunday September 8, 12noon-7pm, FREE
Dubbed the People’s Gig, this free event on Stanley Park will certainly draw the people of Liverpool.
Heading up the bill are Groovy Train city staples, The Farm, who’ve enjoyed a mini renaissance over the last 12 months while playing a major part in the Hillsborough Justice Collective‘s number one single.
But it’s not simply The Farm who make this a day out for Merseyside music lovers; alongside them are a raft of new emerging talents including GIT Award nominees Tea Street Band plus Getintothis endorsed Natalie McCool and VEYU – the latter bagging number one spot in Liverpool’s top tracks of 2013 so far chart.
Expect a big day out.
Details.

East Village Arts Club: Liverpool music is exciting – we want to be a part of it
Liverpool music 2013: Highs, lows and best of year so far
Liverpool’s gig calendar 2013: Guide to essential gigs not to miss the rest of this year