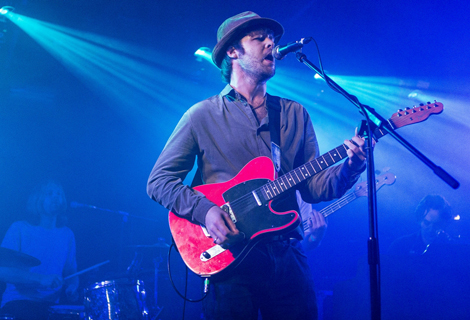 James Skelly made it a family affair at the O2 Academy, Getintothis’ Joseph Viney took in the many talents available to one clan.

The Skelly family are obviously a very tight-knit unit.
Not content with having brother Ian on drums, James Skelly, singer with the always-wonderful Coral, has his sister Fiona’s band, The Sundowners filling the support slot gap.
This isn’t just lazy nepotism though. All of the family are present tonight on merit, and their performances give even more credence to that fact. James Skelly enters to a fittingly warm welcome (the venue is nothing less than an absolute sweatbox as ever) and without much ado, crashes headlong into the first number.
Skelly has made no secret of his and his bandmate’s adoration of Captain Beefheart and tonight, purposefully or otherwise, Skelly’s choice of clobber is channelling the madman of the desert; his beige, wide-brimmed hat and well-worn shirt are just what Don Van Vliet would have ordered. 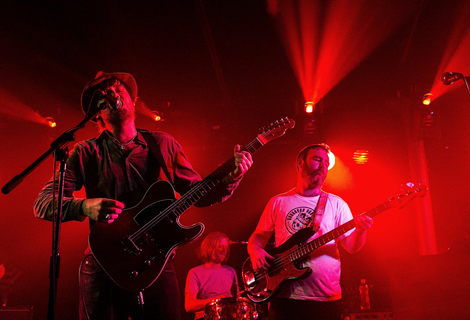 James Skelly & The Intenders at O2 Academy, Liverpool
Ironically, given that he looks like Beefheart tonight and with the Coral’s penchant for abstract mores and plain weirdness, Skelly and his Intenders are a more straightforward proposition.
That’s not a bad thing by any stretch. New album Love Undercover is a real gem; throwing out dazzling guitar pop hits that skirt the usual tropes of love and ennui in the modern age.
It’s well-represented tonight, and songs such as Do It Again (this is the part where Getintothis became convinced a cover of Black Rebel Motorcycle Club’s Spread Your Love was on the cards), You’ve Got It All and I’m A Man (just in case you were in doubt) have hooks big enough to catch a whale on.
There’s a lot of wiggle room in their canon, and it leaves plenty of time and opportunity for psych-esque freak outs; guitars screaming, cymbals crashing, all waiting for the vaunted cosmic nod. Naturally, there’s the obligatory nod to Skelly’s past and present, with the quite possibly eternal Dreaming Of You making an appearance. Once that bassline hits, it’s pandemonium. All together now…”What’s up with my heart when it skips a beat…?” 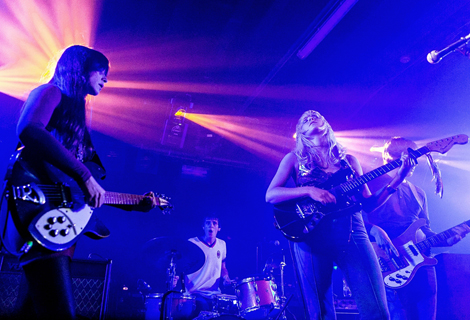 The Sundowners at O2 Academy, Liverpool
The night’s main support came in the form of the Sundowners, who have that rather good knack of never disappointing. Boasting two more Skellys (Fiona and Alfie…does this family tree ever end?!), the five-piece are an absolute revelation and their live show leaves you wanting a helluva lot more.
Swapping vocals and guitar lines with regularity, singers Niamh Rowe and Fiona Skelly are powerful front for this imposing operation.
Behind them, Alfie just doesn’t seem to ever stop wringing screeching solos from his poor, battered guitar while their rhythm section manages to keep the train from flying off the tracks. Songs like Don’t Come Knockin’ are great on record, but have to be seen live to do it some real justice. 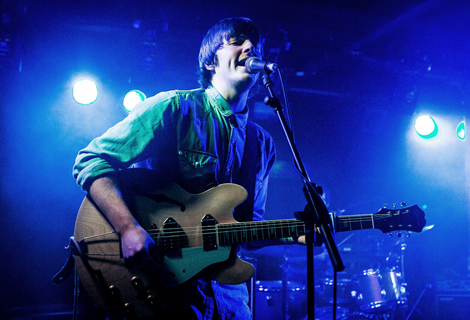 The Circles at O2 Academy, Liverpool
Now, far be it for Getintothis to be cynical…*cough*…but we’ll be straight, the Circles didn’t really look like they could do a job tonight.
Three vaguely looking nervous lads hit the stage to a disappointingly quiet and empty venue. We’ve seen this scenario too many times before… But then that’s the problem with first impressions, you only get to make one. The Circles put on a corker of a show and indicated just why the Skelly clan have taken to them, having shared stages on a number of occasions already this year.
The Birmingham group deal in 60s-tinged guitar rock but their sound belies both their relative youth and three-piece line-up. There’s barely a let-up in their set, minimal patter between songs (good lads!) and a strong sense of determination etched on their faces.
By time they clatter to a halt amid another maelstrom of wailing and thumping, the crowd has grown considerably. Tonight, the Circles did indeed take the square.
Pictures by Getintothis’ Tomas Adam.
Further reading on Getintothis:
James Skelly & The Intenders play HMV in-store set
James Skelly & The Intenders: Do It Again
Ian Skelly & Serpent Power: HMV, Liverpool One – picture gallery
FestEVOL day one feat. The Sundowners
Ian Skelly & Serpent Power, The Sundowners: The Zanzibar, Liverpool