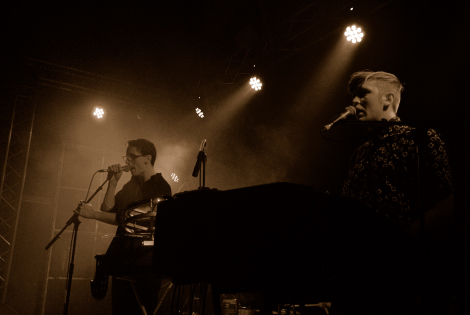 Outfit, championed on these pages since their debut gig, set out on their first UK headline tour this week. We sent Getintothis’ Harry Sumnall, the only music devotee on Merseyside yet to see them live for a novice’s reflection.

Would you like to review Outfit?
When the call came in, this particular Getintothis scribe, thought of ourselves an odd choice, particularly given we are perhaps one of the few people in the Liverpool music scene yet to have borne witness to their charms – discounting their unusual contribution to Mercy‘s Electronic Voice Phenomena staged earlier this year at St George’s Hall.
We usually prefer our electro pop with a heroic dose of weirdness or heavy-handed irony a la Finland’s K-X-P (last featured mixing Lord of the Rings prog with DFA death disco at Blade Factory) or Germany’s Jeans Team. However, always open to something new, we accepted the invitation in the spirit of one of those TV shows that exposes out-of-touch D-list celebs to unfamiliar elements of contemporary culture. Okay, so this was hardly a conceit on the scale of Peter Andre at the Orgien Mysterien Theatre, but Getintothis was extremely glad that we accepted – and this was a band that surprised us greatly. 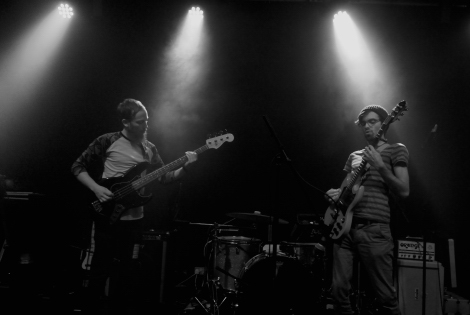 Other Earth at East Village Arts Club
The East Village Arts Club loft is a great venue; just the right size at this moment in time for Outfit‘s increasing popularity. The house sound is particularly good, much better than we can remember from the days of The Masque; providing a delicate balance that still allowed the pristine bass, so important to Outift, to permeate through the body, without any of the muddy blurs that affects many other Liverpool systems.
An early evening show meant a sparse crowd for openers Other Earth; a real shame because their set was almost on par with the headliner’s. An electronic duo, the relatively short performance gained interest through Jay Freeman‘s busy live bass and George Maund‘s shuffling guitars. The use of triggered, pre-prepared loops in their extended song cycle inevitably meant that the creativity of the beats lagged behind the rest of the musical energy, but the last phase of the piece really impressed with its hypnotic Reichian-like syncopated synthesisers.
If this style could have been extended throughout the set, perhaps allowing the musicians to move beyond the comforts of a rehearsed, structured performance, in order to embrace a freer, shifting sound, then this might develop into something special.
Here though, we must pause and confess our ignorance as to most of the songs comprising Outfit‘s set – titles concern Performance? Memory? Alienation? Time? These are all classic pop themes of course, and although Outfit don’t stray too far from the familiar modernist template first set out in Fernando Pessoa‘s Book of Disquiet, as someone who prefers the nuances of a voice, and how this compliments instrumentation, Andrew Hunt‘s vocals worked well and were a real strength. While we must confess that what Outfit were trying to communicate lyrically didn’t resonate with me, the way they chose to deliver it was very appealing.
In fact, this is a great live band, their slick but cleverly considered sound works well on stage, and importantly, for all its simplicity, the interlocking drums and bass meant that the subtle complexity of the recorded tracks are preserved. Thomas Gorton‘s keyboards and co-vocals fill the mix, adding a distinguishing sophistication and coherence to the music, often providing a space and freedom for the other instruments to work. 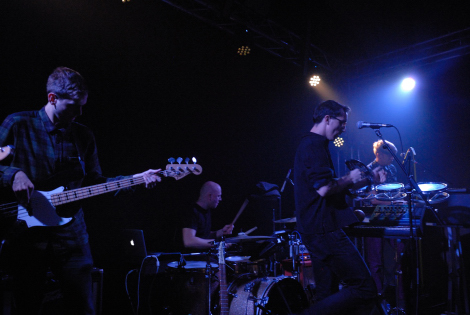 While there was a mid-set dip (an ill advised ’80s power ballad’ – the description of my gig companion), like all good bands Outfit have the ability to move things in new directions, even within-song; a deceit that effectively unsettles the listener and momentarily focuses attention away from the expected song progression.
This is what we liked most about them, and what sets them apart from many of the other Northern English and Scottish bands dabbling with this form of music. It was also interesting to observe the stagecraft of band members. While singer Hunt seemed comfortable as front man, dancing round his frame drums, and eventually tossing his percussion into the crowd, other members seemed to have to work hard to maintain the identity of (soon to be) pop stars. These moments of awkwardness were charming and added to the band’s appeal.
We’re not sure what the future holds for Outfit, but from tonight its clear that they have a loyal fan-base who really get what they’re trying to do, and they have the talent and songwriting skills to make an impact.
Is this enough? We’re not the right person to ask. So while we may not still be a total Outfit convert, they’re producing some of the most interesting music (loosely) associated with Liverpool right now, and that’s certainly good enough for us.