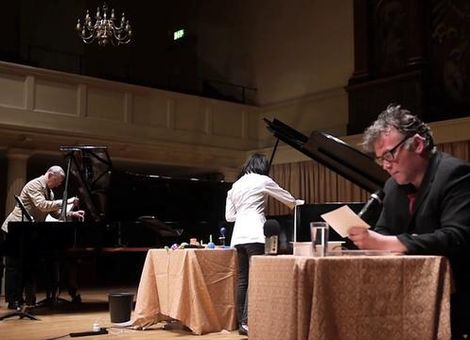 The legendary composer’s work is channelled through everybody’s favourite sardonic comic in bringing Indeterminacy to Liverpool, Getintothis’ Joseph Viney sifts through the rubble of an ambitious artistic endeavour.

If it’s art you want, then it’s art you’re gonna get!
Indeterminacy is two artistically adventurous and complementary performances exploring conceptual links of chance and humour via improvisational approaches.
The late John Cage was an artist who constantly sought to push boundaries, and with Indeterminacy he looks set to set new markers for himself.
The responsibility to interpret and transmit Indeterminacy’s challenging structures has been taken up by Stewart Lee, the comic whose long career speaks for itself. Always offering more than your average Live At The Apollo mic-wielder, Lee’s posthumous partnership with Cage is something that probably should have been explored long ago.
No matter, because it’s here and now and it’s coming to Liverpool’s Philharmonic Hall on Friday March 28.
Indeterminacy was originally a 1959 double LP on the Folkways label by John Cage and David Tudor.
Cage read ninety of his stories, each one, whether long or short, lasting one minute. Unheard by Cage, Tudor simultaneously played the piano and other things in another room.
The show contains compositions that explore experimental terrains, twisting technology to transform organic sounds into eerie calls that flow from intense waves of abrasive, noisy, chaos invoking industrial nostalgia, to structured pulsating rhythms, to melancholic, metaphysical drones.
As you can probably tell, Indeterminacy comes replete with a lot of weighty concepts, so in the interests of fairness let’s allow the show’s original mastermind to explain it in his own words.
Cage had previously said about Indeterminacy that “(his) intention in putting the stories together in an unplanned way was to suggest that all things – stories, incidental sounds from the environment, and, by extension, beings – are related, and that this complexity is more evident when it is not oversimplified by an idea of relationship in one person’s mind.”
Got that? To get the full story and to be given the chance to glean brand new perspectives, get yourself down there and immerse yourself in another world.

Share. Twitter Facebook Google+ Pinterest LinkedIn Tumblr Email
Previous ArticleCleft sack off the subtlety and go for some old fashioned bish-bash-Bosh
Next Article Liverpool music’s ones to watch in 2014 – the new breed to listen out for on Merseyside