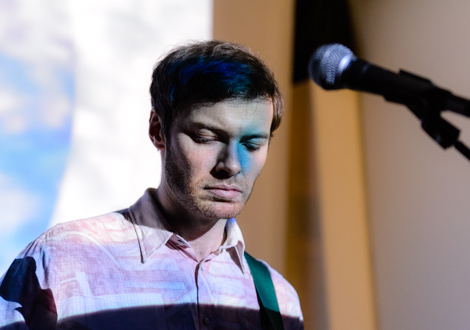 A new venue opens its doors and its opening night attracted some top talent, Getintothis’ Mick Everett sifted through the fallout.

Inhabiting the same place where a band work away the minutiae of detail on their songs is always an odd concoction.
Being invited into their world often leads to a certain cosiness, a through the keyhole moment. From the off this was a claustrophobic yet impressive affair all round.
The Fallout Factory, an art gallery and band rehearsal space, was pretty much busy before the first band came on. In fact it had us hoping that enough people would be enough and thankfully that happened. It wasn’t quite a tin of sardines but very close. 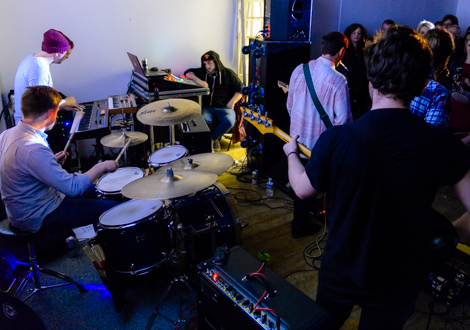 VEYU at Fallout Factory, Liverpool
VEYU have risen steadily since their support for MONEY in the Blade Factory at the back end of last year.
The sound in their home environment seemed more focused, less rambunctious and dare we say it, gentle.
The history of rock and roll doesn’t tend to do gentle well but VEYU manage it with aplomb. Running is a smooth operator and ticks all the boxes of what is wanted in an archetypal “indie single”.
This categorization is often seen as a slight against bands these days post the “landfill indie” tag. Like MONEY though they show invigoration within the genre.
Melancholy is back and gone is the laddish brashness that still haunts guitar music in general. There is a beauty in this record as well as the set as a whole. 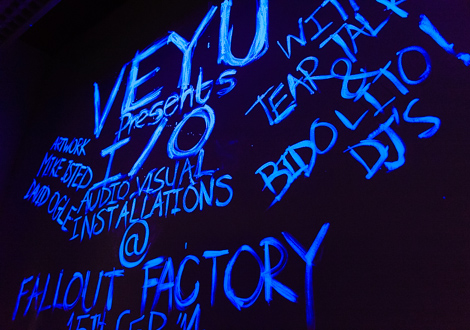 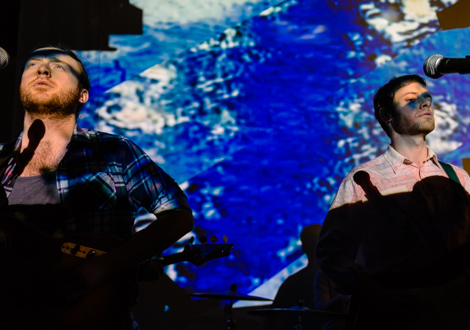 VEYU at Fallout Factory, Liverpool
That’s not to say that they can’t challenge sonically. Blue Voices and In The Forest build up to something pretty special too.
There is metronomic drumming that builds up into the nearest thing that you could call heavy. It is with purpose though and not just for the sake of it.
There’s no quiet/loud formula here to get bogged down in but more of a journey travelling from A to B taking in various expressions along the way.
It must be said that the drumming here from Tom McCabe is exquisite and this is shown by managing to pull off Nothing But Flowers-era percussion on one track.
One minor negative point is that the vocals dip too far underneath the music, whereas on record they are pristine and lush.
This isn’t exclusive to VEYU to be fair and many bands fall victim to this in small venues. Chris Beesley definitely has the ability it might jut need those top end mids to peak through a bit more. 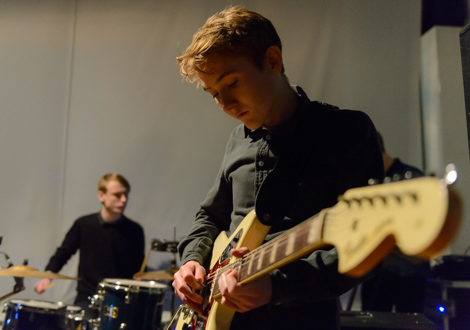 Tear Talk at Fallout Factory, Liverpool
Tear Talk have surprisingly very similar nuances to The xx but less synth focused.
Shoegaze seems to becoming a catch all term for introspective mid paced guitar fuzz bands. Debuting a completely new set tonight there is definitely promise here. There appears to be something more acute with Tear Talk than the average shoegaze band though.
Let’s hope they nail this precision on their By The Sea-produced material that will be out this year. Combining all of this with splendid digital visuals from creative studio Deerstalker, this night was a successful opener to a new venue. Here’s to more nights at the gallery.
Pictures by Getintothis’ Simon Lewis.
Further reading on Getintothis: