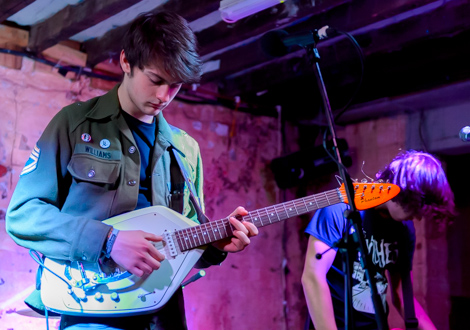 Channelling the spirit of post-punk icons, The Probes are one of Liverpool’s youngest yet brightest new talents, Getintothis’ Andy Von Pip provides an insight into a potentially dazzling future.

Mixing a dark menacing new wave sensibility with mind-bending psychedelic flourishes The Probes are without doubt one of the most exciting young bands to emerge from Liverpool in recent years.
After initially bonding as school friends over artists such as The Fall, Love, Tame Impala, CAN, Neu!, and Kraftwerk, The Probes became active in their current form in 2012 and where soon snapped up by Porcupine Records – the team behind the likes of Echo & The Bunnymen.
Their latest EP, Synesthesia, highlights the burgeoning talent these young lads possess and with outstanding tracks such as the hypnotic Marrakech, Sunshine State Of Mind and the explosive post punk of Plastic Lamb, they prove they can produce tunes of power, insight, and dark glittering beauty.
But perhaps the EP’s closing track the Marrekech dub mix gives a greater insight into just what the band are capable of and what can be expected from The Probes‘ live experience.
Their recent set at Sound City was nothing short of stunning and was undoubtedly one of our personal highlights of the entire festival.
Indeed after said set hotly tipped Mancunian duo Bernard + Edith felt compelled to tweet ‘If u wanna see Joy Division reborn go see The Probes – fukin amazin‘ and in front man Jack Greene with his commanding stentorian vocal it’s hard not to make comparisons to the two Ians – Curtis and McCulloch.
And when you catch them live it’s only then you appreciate their vast potential, which is so huge you could probably see it from space.