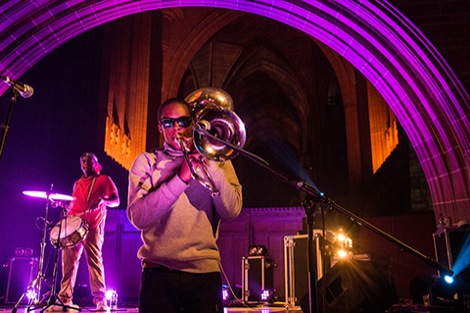 Fiesta Bombarda celebrates to years of spectacle in Liverpool, Getintothis’ Patrick Clarke reflects on an exotic evening of energy at the Anglican Cathedral.

Should the magisterial backing of the UK’s largest cathedral not suffice, Ethiopia’s Krar Collective have magnetism enough to fill it.
Thy do so impressively enough, using merely an understated drum kit and the titular Krar, (a traditional West African lyre – cheers Google), as backing. The trio overflow in their vibrancy, and those adrift among Liverpool Cathedral‘s nooks and crannies are drawn immediately in by the commanding vocal interchange of Krarist Temesegen Zeleke and frontwoman Genet Asafa, while the propulsive percussion of Grum Begashaw is affirmation alone of the evening’s exuberance. 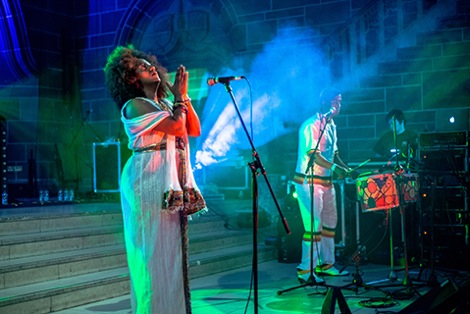 The Krar Collective at Fiesta Bombarda in Anglican Cathedral
That Zeleke was a protégé of the legendary Mulatu Astatke should come as no surprise judging by the masterful aura that surrounds the trio. While polished to perfection the set’s entirely organic; crowd members take to the stage to show off their dodgy dancing, joined on occasion by one horn-blowing costume changer who pops up intermittently to joyous reception, while Zeleke draws endless textures from his pedals to lend limitless intrigue. In the space of half an hour or so the Collective make a perfect case for both the evening and themselves, proving that classification aside they’re as good a live band as it gets. 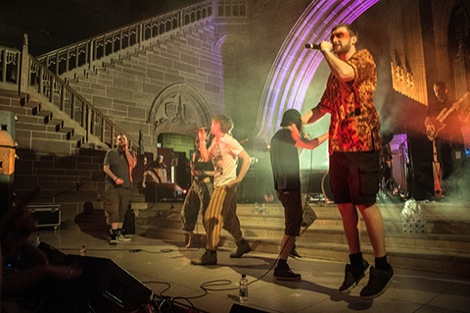 The Fire Beneath The Sea at Fiesta Bombarda in Anglican Cathedral
Though up-tempo, the Collective are decidedly relaxing in comparison to their Merseyside successors The Fire Beneath the Sea. The indigenous edge is made immediately apparent, with the crowd almost doubling in size, playing into the eleven-piece’s hands as their blistering enthusiasm hits like a tidal wave, raising the tone to near frenzy.
A cacophony of funk, jazz, hip-hop and everything in between, their sound is predictably cacophonous, and though their lack of virtuosity sticks out in comparison to their predecessors it’s hard not to be won over by pure force of energy, and they’re evidently masters of conjuring a party atmosphere.
Completing an eccentric trinity are New Orleans’ Hot 8 Brass Band, once again raising the continent count. There’s barely a pause for breath once the group launch into their set, with each segment twisting into the next without a break.
Opener What’s My Name? kicks things off in suitably jubilant fashion, slipping into a groove that simply demands attention. Though sparse on vocals the band brim with charisma, bringing lashings of Mardi-Gras spirit to a crowd now chomping at the bit to sustain festivities.
As they progress covers of Ghost Town and Sexual Healing raise their heads above the ruckus, the Hot 8 are rooted their city’s rich tradition, a fact that works entirely to their advantage.
Candid in their lack of pretension, the Hot 8 Brass Band are at their core entertainers, and first-rate ones at that, capping off a diverse evening of stunning showcases in suitably euphoric fashion. 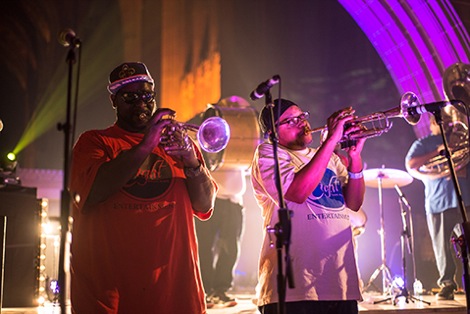 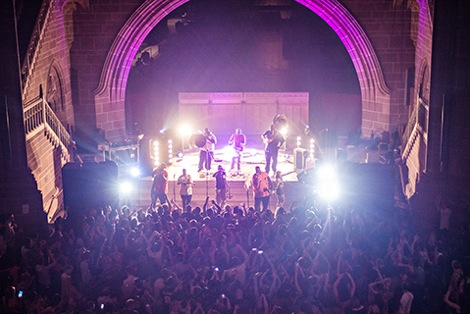