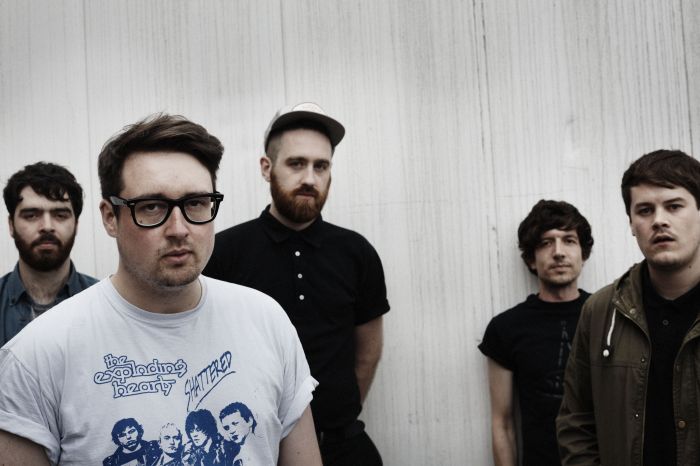 Hookworms play Liverpool Music Week in support of an astonishing new record, Hum, out next month, Getintothis took time out to catch up with the band.

In advance of the release of their second album, Hum, Leeds-based neo-psychedelic five-piece Hookworms return to Liverpool on Monday October 27 to play The Kazimier as part of Liverpool Music Week.

Having previously wowed at Liverpool International Festival of Psychedelia in 2012 and 2013 and after showcasing new songs at this year’s End of the Road Festival, their set is sure to be rapturously received.

While retaining influences from garage rock, Spaceman 3-era psychedelia and even American hardcore, the new album offers a leaner and more propulsive sound aided by a new drummer, JN. It also promises to build on the formula established by Getintothis’ album of 2013, Pearl Mystic.

The band have garnered a reputation for their DIY aesthetic and independent mindedness and consequently have shared a sneak preview of a new track, Off Screen, on the websites of some of the country’s finest independent music retailers. Where the rest of the album is said to be relentless in its pace and energy, this track is slower and offers an insight into the emotional fragility of the band as the sound washes over you in waves.

A Hookworms live show is an intense and thrilling experience and with next week’s gig and the forthcoming new LP these are exciting times for the band. Ahead of this, Getintothis caught up with the band.

Getintothis: We first witnessed Hookworms at the Liverpool Psych Fest in 2013. Our memory of the gig was that it was an almost terrifying visual/sonic spectacle. Where would you say that the band are more focused – on the live/immediate experience or on the process of recording?

MB: It’s quite hard to compare the two really. We practice maybe two or three times a month, and our shows only last about 45 minutes, so that’s more of a short, intense burst of focus, whereas we’ve spent 9-10 months making each of the last couple of albums. They require a very different type of focus. Saying that, I do consider us to be a live band, first and foremost, though the gratification of listening back to a finished album that you’ve just spent the best part of year working on is unrivalled.

Getintothis: There’s lots of repetition, driving beats, melodies and at times a confrontational utterance apparent in your music. In a material sense would you say that the Hookworms sound relates to a critique of contemporary consumerism or is there a more ritualistic element that drives the band’s sound?

MB: I think the repetition initially came from escapism. It’s very easy to quickly lose yourself in a loop or a short, repeated phrase, and losing ourselves for a short period of time was definitely the intention when we started the band and began playing together. A lot of the music we listen to has strong elements of repetition as well, and the way the human brain reacts to it is very interesting. Maybe it just reflects the repetition in the never-ending, mundane grind of life and work?

Getintothis: We were compelled by the band’s artwork, especially on the Pearl Mystic album and we found ourselves wanting to own the album on the strength of the artwork before even hearing the band. How much attention goes on the artwork? Is there a specific narrative behind how you approach the design of your records?

JW: A lot of time and stress goes into the artwork. I spent my formative years drinking in Brudenell Social Club being surrounded by gig posters, I must’ve spent hours upon hours upon hours just staring at certain posters and working out what I did and didn’t like about each one. It probably didn’t make me a very good drinking partner. I’m obsessed with music artwork and fell in love with posters by C.M. Ruiz at about the age of 16 and have had an infatuation with photocopiers ever since.

Photocopying was a big part of the Pearl Mystic artwork. I wouldn’t say there’s a narrative as such, but there is a feeling to all music and it’s just an attempt to capture that through image, colour and experimentation. I often feel that record covers nowadays are designed to look like record covers and to me that’s not very interesting. I approach it as an artwork first and a record sleeve second, I think that text breaks this illusion, and that’s why our covers don’t contain the band name or record title.

Getintothis: Live the band are incredibly tight in terms of production yet the vocals appear improvised and even wild compared with the clarity of the overall sound. How do you approach the vocals/lyrics and how are they prioritised in terms of the band’s psych sensibility?

MJ: I always write the lyrics last.  We treat them as an instrument and not as the focal point of the music. Our band is five equal individuals rather than a backing group and frontman like most.  In terms of the presentation of my lyrics I always wished I was Ian Svenonius but I’ll never be as sexy or wise.

Getintothis: We read somewhere that the band started off as a hardcore band. What led you towards the Psych genre and do you think there are similarities between the hardcore punk and psych genres?

MB: We started off trying to do something a bit more sludgy and heavy for sure, along the lines of Flipper/Brainbombs. We still wanted the repetition to be there, but it just developed naturally as a result of us having a few effects pedals lying around. Songs open up in quite a panoramic way when you start throwing phasers and wah pedals into the mix.

I’d say there are definitely similarities to hardcore in the intensity and delivery of decent ‘psych’, but that term has already become so diluted, it’d be ridiculous to try compare someone like Pissed Jeans to some flowery, paisley UK indie pop.

Getintothis: We’ve heard the opening tracks from the new album and while it retains a psych aesthetic it also sounds very contemporary. Could you describe the progression of your ideas between Pearl Mystic and The Hum?

MB: Without realising it, the writing of The Hum began before Pearl Mystic had even been released. We had written and recorded the song Radio Tokyo for a limited 7”, and that song accidently ended up being the starting point for the rest of the writing process, which was back in January 2013.

Radio Tokyo was probably the most upbeat, uptempo song we had written up until that point, and it ended up being one of our favourites to play live, because of the way it made us feel and the way that people reacted to it live. It was never really discussed or decided, but the next few songs we worked on subsequently ended up being more upbeat and minimal than anything we’d written before.

I do think it was a conscious effort to strip back a bit on the effects though, and the drums are noticeably dryer than on Pearl Mystic. There are a few new electronic elements that made their way on to the record as well.