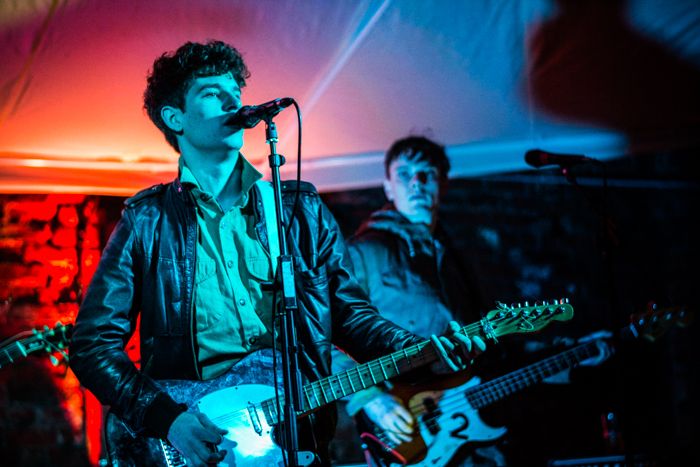 Sugarmen ramp up their live dates with an intimate showing at Magnet, Getintothis’ John Hodgkinson reports on their thrilling rise.

We call it the Eric’s Diaspora. The roots are embedded in Roger Eagle’s legendary Mathew Street club and an inspiration to a generation.

Its continuing impact on the cultural life of the city is a tribute to a man who was a true visionary. You only have to consider people like Jayne Casey and the wonderful work she continues to do as evidence of this.

These roots haven’t ossified, however. The next generation are emerging in the shape of bands like The Probes and The Visitors, whose pedigree can be traced back to that dingy, smelly, glorious venue that so many still hold dear.

The vanguard of the latest assault on the aural senses of the city is being taken up by Sugarmen, whose pedigree is impeccable. But perhaps lineage is almost irrelevant in their case, to emphasise it would be doing an injustice to the finest of young bands to emerge for a long time. In their short life, they have already garnered the support of Mick Jones, who produced their forthcoming album, Paul Weller, who lent them his studio and an engineer to record it and Alan McGee.

The Magnet is the perfect place for a band like Sugarmen, there is something about the faded glory of its old school crimson clad claustrophobia that makes sense for a band that aren’t afraid to wear their influences on their guitar straps. Think Clash, Orange Juice and Velvet Underground and take them as a starting point.

Words really do scant justice to experiencing Sugarmen live. They amount to something much more than their constituent parts.

Fast Food Law comes in on a wave of confusion and feedback, singer Luke looks baffled. Then something clicks into place and the redemptive power of their punky pop begins to thrill. They are visually compelling too. Luke and Chay, even on The Magnet’s tiny stage, find the room to career around their own space as well as in each others.

Luke thrashes the living daylights out of his guitar while declaiming his vocals with conviction. Chay hunches languidly over his Les Paul occasionally striking Jonesesque poses, every so often bursting into a frenzy of jagged movement, wringing concise solos from his fretboard. There is a hint of their inspirations with a revitalising cover of Lou Reed’s Hanging Round and they almost make the song their own.

Their power and capacity to excite is further underlined by the visceral rock ‘n’ roll of Central Line, on which Chay takes the lead vocal. He is a consummate front man in his own right, but with Luke there is a visual counterpoint that ignites the stage.

Ending with This Is My Life (And It’s Alright), they exude a confidence that Sugarmen’s short and invigorating set is only the genesis of something that is about to become very special.

Share. Twitter Facebook Google+ Pinterest LinkedIn Tumblr Email
Previous ArticleLåpsley premieres Falling Short video ahead of Understudy EP January release
Next Article The Sundowners on their debut album, protest songs from the North West coast plus exclusive stream of Who We Are