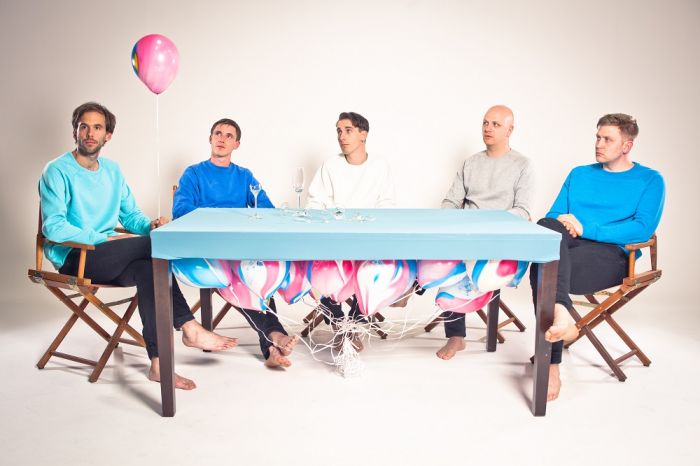 As tumbling electronic whirs and purposeful jabs of rich piano breeze into earshot, dovetailing into an expansive, sprawling pop-monolith of an opener, so unfurls what many this side of the Mersey and beyond are already touting as the finest album of the year – Slowness (released June 15, currently streaming in full at Stereogum).

Yet with frontman Andrew Hunt most often based in Brooklyn and fellow vocalist Tom Gorton in London, can we really get away with claiming its auteurs, Outfit, as one of our own? Can we bestow on them the clichéd mixed blessings of being a ‘Liverpool band’, as is journalistic routine?

In many ways the question’s irrelevant – the sheer scope of the album sets it out for far broader latitudes of attention in itself – yet Hunt can still see the band in a tradition of sorts. “Liverpool has a long history of unusual pop artists; people interested in fusing the more ethereal psychedelic sounds and pop tradition” he explains.

“Coming right from the playfulness and whimsy of some of the Beatles stuff, through to Echo and the Bunnymen, how cinematic that is, and then to The Coral, there’s this kind of psychedelia that runs through it all. I think in a way we fit in that lineage of bands trying to fuse pop song-writing craft with something that’s more ethereal or experimental.”

It’s fair to say they’ve succeeded. The band’s sophomore LP marking monumental headway from the off-centre if still straight-up pop of 2013’s Performance. Still sparkling at the surface are the gently eccentric leaps of vocal and irrefutable grooves of louche, seamless bass guitar that lent their first record its considerable charms, but on Slowness they’re lent a greater conceptual clout, a far-reaching transatlantic gaze of the unorthodox approach, their instrumentation pushed to new boundaries in the very act of refinement.

“I think it’s because we’ve decided to use a more static line-up for the instrumentation,” says Hunt on the subject of the album’s advancement. “I think we were keen to make sure that we did unusual things with those sounds.

“I think in some ways it’s a more psychedelic sounding record, although it’s not quite as dazzling in the number of sounds used in it as the first album. It’s a marked progression in the band, you can hear us playing much more on this record; you can hear our individual characters much more.”

“We definitely wanted to do something different from the first album,” he continues. “We wanted to explore similar themes lyrically and the inherent balancing point between melancholy and euphoria that we tend to gravitate towards, but we definitely wanted to get away from using the same pop song structures as we did on the first one, be a bit more expansive and give ourselves a bit of freedom to put songs together in a new way.”

Though not an outright departure from pop, it’s certainly a shift from the group, an opportunity, as their singer puts it, “to stretch out, try new things make less of a commercial album”.

Critical acclaim for the new album was always essentially a given, but as so often accompanies such a manner of acclaim, commercialism can suffer. “I don’t think that anyone who wanted to be commercially successful would have made the album we’ve just made and then released it, so I guess that side isn’t as important to us” says Andrew, and it’s to the group’s immense credit that such cynical panders to one side or the other of the age-old imagined divide are of little concern.

“It’s just about the joy of making something, rather than thinking about its life after you finish it” he explains. “At the end of the day, to use a cliché, you end up wanting to just make something that we’re proud of. I know it sounds cheesy but when it comes down to it that’s all you’ve got left really. If you released an album that nobody liked and everyone trashed you then you need to still like it.”

They can rest-assured, regardless, that the trash-talkers are as-of-yet non-existent, yet there’s a strange juxtaposition to Outfit at the moment.

To all ears they’re evidently at their very tightest and most ambitious, yet gone are the close-quarters days of the now semi-legendary Lodge, the obscure, eccentric Liverpool party mansion where the group saw their genesis.

“These days it’s only really when we have shows to do,” says the singer on how often the group are simply in the same room. “I think [long distance]is part of the reason we decided to make there more of a ‘live band’ feel to the record” Hunt explains of the paradox, “because it’s almost like the hardest thing we could do.

“When we were actually recording we were together, it’s not like we were sending files to each other, working remotely” he continues on the recording process.

“Even though we were living in different places when we chose to work on the album we came together to do it. In that sense it was quite traditional, but it became difficult to find time when we were all gonna be free, and I guess it just meant we had to be quite determined to get it finished. We were working on it off and on for about a year.”

Though the group’s determination has most certainly paid off, it simply can’t be overlooked that the band kept going at all, electrified as we are that they did. “It’s just fun to do!” Hunt proclaims when asked just how they keep it going.

“You get a feeling from working with other musicians that you don’t really get when you do stuff on your own. Me and Tom both do music on our own when we’re not doing Outfit and there’s a sense of freedom to it but you don’t get that feeling of being surprised by someone else, surprised by someone else’s contribution. It’s still a really vital and exciting bit of being a band.”

It seems that the distance between the group has been something of a paradoxical positive. As Andrew explains, the limiting of his band’s time as a whole leaves those precious moments underpinned with a sense of vitality – “it means you’ve got to be pretty committed, it means that every sound you use, every part has to really count, because otherwise you’re wasting your time” as the frontman puts it.

Their geographic diversity also contributes to the creative process, owing to the fact that, as Andrew says, “a sense of place and location has always been quite important to what we’ve done… Where we are as a band has always fed into the end result of our collaborating. On this album it’s more true than ever”

“The first song we ever released properly was Two Islands” he goes on, “which was about living in [The Lodge], then we released an EP where a lot of the lyrics were to do with the anxiety about moving down to London. Then our first album, where it was made wasn’t so much woven into the lyrics but it certainly played a big part of the sound of it, the fact we had this home studio and we could suddenly spend a long time on recording had a big effect.”

Yet of all those locations that have so informed the shimmering brilliance of the group’s new album, and though ‘Liverpool band’ might be a bit lazy as a label, we like to think it’s Merseyside that runs deepest.

Of their album launch at The Kazimier on June 18, Andrew’s quick to proclaim it “absolutely a homecoming,” and points out that “if we weren’t from Liverpool it’d be a whole different story. We wouldn’t have had the freedom to experiment. It’s just quite an encouraging community of people, we’ve got so many friends who influence what we do, how we approach music.”

Transatlantic they may now be, but as Andrew proclaims that “the city is absolutely, deeply ingrained in our band,” it’s hard not to admit that the city returns the sentiment. Categorisations aside, however, whether in genre, geography or commercialism, in Outfit‘s new album is poised to carve their name on a scale of international scope.