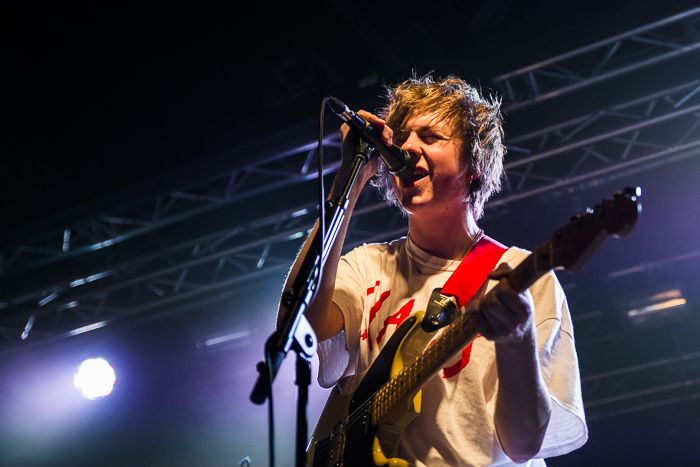 There’s bands to see, places to be and shapes to throw in Manchester this September, as Getintothis‘ James Sullivan looks at the top five gigs of the month.

As September swings around, the morning trams are filled once again with scurrying children heading off to school, hair brushed diligently into a side parting; satchels, caps and handkerchiefs in place. The sweltering Manchester summer is blown gently along by a cool autumnal breeze. The parks begin to glow auburn, as the parched yellow grass begs for that first drop of rain.

But despite this spirit of change, the promoters and venues of Manchester relentlessly go about their business, and the end of the festival season simply means the beginning of the autumn tours.

You need a guide, someone to steer you through this vast array of the finest live music entertainment the North West can provide.

Here for your reading pleasure: the top five gigs of the month in Manchester for September 2015.

The other ‘Bard of Salford’, Vinny Peculiar has released eleven albums of off-kilter pop starting with his 2002 debut Ironing the Soul.

Lying somewhere between The Auteurs, Morrissey, British Sea Power, Jarvis Cocker and Roger McGough, Vinny Peculiar has a uniquely homespun aesthetic, and a love of the mundane.

He’ll be at Gullivers playing songs and spinning yarns from his new record Down the Bright Stream, released earlier in the year.

Eastern Bloc’s been dishing out the best in underground electronica for thirty years. From its cosy (read: bloody small) base in Stevenson Square, it offers up techno, house, drum & bass and reggae records that exist to be played loudly, in the presence of as many people as possible.

So what better way to celebrate the big day than throwing a massive bash, just down the road at Band on the Wall? Both rooms will be packed, resident DJs and special guests galore, seven hours of music, five quid. We’re in.

When California’s high priest of psychedelia (and yet another former member of The Fall) Tim Presley came through Manchester with his band White Fence in January, he was joined by Cate Le Bon on rhythm guitar.

It seemed to go so well, the two quickly whipped together a new project, named it DRINKS, got signed to Heavenly Records and are off on tour again. Easy, really.

Proper rock and roll royalty from the smartest man to ever play guitar in a punk band. Walter Lure is most well-known from his days co-piloting one of the least steady ships in music: Johnny Thunders and the Heartbreakers.

In the 1970s, he stood side-by-side with Thunders, Richard Hell, Jerry Nolan, The Ramones, and then got out before it all caught up with him, landing a job on Wall Street. He didn’t touch UK soil for 25 years until a couple of years ago when a hopeful email out of the blue – offering to set up some gigs – brought him over. After supporting The Jim Jones Revue at their farewell show last year, Lure’s once again backed by members of Birmingham’s Gunfire Dance and doing a short tour.

Still as energised, whip-smart and switched-on as the songs he plays, to see him on the tiny Soup Kitchen stage is a must for anyone who’s ever picked up a guitar and curled their lip.

Indie, hip hop and bedroom beats collide with the one-man band of Chelmsford’s Rat Boy, or 19 year-old Jordan Cardy, as he’s more-likely to be called by Mother Cardy.

Jamie T, Mike Skinner, Blur and the Libertines are the most obvious touchstones for his frenetic beats and everyday delivery about the banality and struggles of modern life, like losing your job in Wetherspoons (on debut single Sign On).