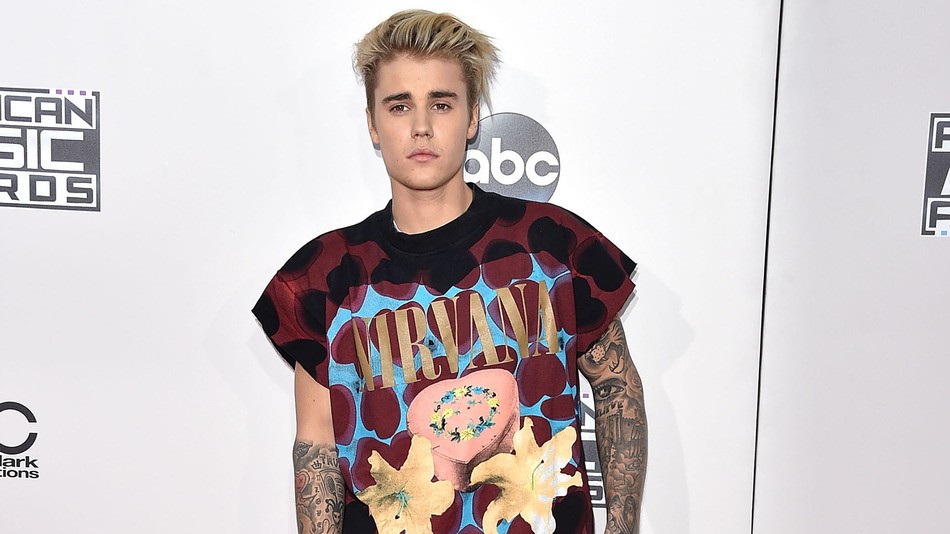 After Justin Bieber receives abuse for wearing Nirvana and Metallica t-shirts, Getintothis’ Shaun Ponsonby asks why this means so much to us.

I was marginally distraught. This gimp thought Motorhead was a fashion line, not a badass gang of rock & rollers, headed by the single greatest Capricorn there ever was; Our Lord, Lemmy (sorry, Jesus!). It just so happens I was wearing a Motorhead tour t-shirt that day, so I was able to correct him, much to my own smug satisfaction and his own bemused indifference.

At the American Music Awards last week, autotuned international punching bag (and occasional balcony-based naturist) Justin Bieber showed up in a Nirvana t-shirt, and was previously seen wearing a Metallica t-shirt, much to the vexation of social media.

Why the fuck is Justin bieber wearing a nirvana and Metallica shirt ,disgusted

The most popular person in the world supported him though.

You're cool in my book @justinbieber xc

But why does this bother us so?

As somebody who loathes football, I would never wear a football kit for fashion purposes. I definitely wouldn’t walk around in a Chelsea t-shirt with a glittery logo. It says nothing about me, and to wear such a thing feels a little disrespectful to people for whom football disproportionately means a matter of life, death and a belief that if you shout loud enough at the television screen, the referee will turn around and say “actually, you’ve got a point there, mate” and reverse his decision.  I think it’s safe to say that most people who don’t like football would agree that they wouldn’t wear a football shirt.

I wear a lot of t-shirts that reference bands, movies and TV shows, but they’re always things that mean something to me. I don’t understand why someone would wear one of those logos without even basic understanding of what it is on their chest. In a strange way it’s almost a badge of honour, a statement of “this is part of who I am”. It means a hell of a lot more than “that looks cool”.

Much in the same way that [insert football team]mean something more to their supporters, Nirvana mean more to their fans. They represent something deeper about them. It is something they connect to on a profound level. To see someone who represents the antithesis of this sporting the image that is held so dear to you can feel iconoclastic in the worst possible way.

It’s particularly irritating for metal fans. Metal gets such a bad rap from the rest of society, and yet people are fine wearing Slayer t-shirts when they want to look trendy.

To fans of Nirvana – or Motorhead, or the Ramones, or any other band whose image has become a fashion item – Justin Bieber represents everything that their bands don’t. They see the wearing of their merchandise as hipster douchebaggery and posing. He represents teenybopping, mass marketed lowest common denominator pop that isn’t really about anything. It doesn’t matter whether or not it is truly the case, it’s the feeling it evokes.

Bieber’s stylist Karla Welch didn’t help matters yesterday when she said; “I think it’s so funny that all these people are up in arms. I’m sure Kurt Cobain would be like – I mean I can’t speak for him, obviously – but I don’t think he was so snotty or that he would diss anyone who appreciated his music…I don’t think Kurt Cobain gave two fucks, and I don’t think Justin Bieber does either. You know what I mean?”

I’m hardly a massive Nirvana/Cobain fan (more of a Replacements/Westerberg man myself), but I know how Kurt Cobain felt when he saw the kind of jocks who would beat him up and stuff him in a locker in the front rows of Nirvana shows. Needless to say, he wasn’t best pleased. So Welch speaking for Kurt Cobain, after saying she wouldn’t, feels a little off the mark.

A lot of bands for whose t-shirts become a fashion item are ones who never really broke through. The Ramones are one of the ultimate examples of this. Cult heroes, yes. But their most commercially successful record, 1980’s Phil Spector-produced End of the Century, didn’t even scrape the Top 40 in the US. And yet how many Ramones t-shirts do you see on the high street? I’m pretty sure they’ve sold more t-shirts than albums. If everyone who wore a Ramones t-shirt was a Ramones fan, they would be one of the biggest bands in history.

I’ve mellowed out since my fracas with the non-Motorhead fan, so I question whether Justin Bieber and his ilk really to blame. This vintage t-shirts are available in Topman and River Island. Surely they have been licensed by the bands themselves? So, who am I to be pissed off?

Can we see it as a good thing? These lame-oid celeb-u-tards wearing t-shirts prove that we’re on the right team. Not only did The Directions perform a medley of Blondie’s One Way or Another and The Undertones’ Teenage Kicks, but Harry Whatshisname wore a Rush t-shirt in the video. Despite the juxtaposition of him performing punk songs whilst wearing a t-shirt bearing the logo of a prog rock band and therefore showing his total lack of aesthetic understanding, it does prove that our shit is cooler than your shit. Which is ironic, given Rush’s reputation as one of the nerdiest bands in history (famously, they would play Dungeons & Dragons and have French lessons on tour to keep them out of trouble). I can’t imagine Rush’s Geddy Lee wearing a One Direction t-shirt so proudly.

Perhaps we’re making assumptions. It’s not impossible that Justin Bieber could be a fan of Nirvana and Metallica, even if there’s been no evidence to support the thesis. It’s highly, highly unlikely, but it’s not impossible.

Google are giving away free downloads of Michael Jackson‘s Thriller album to everyone in the US. What’s the point in that? Doesn’t everyone already own it?