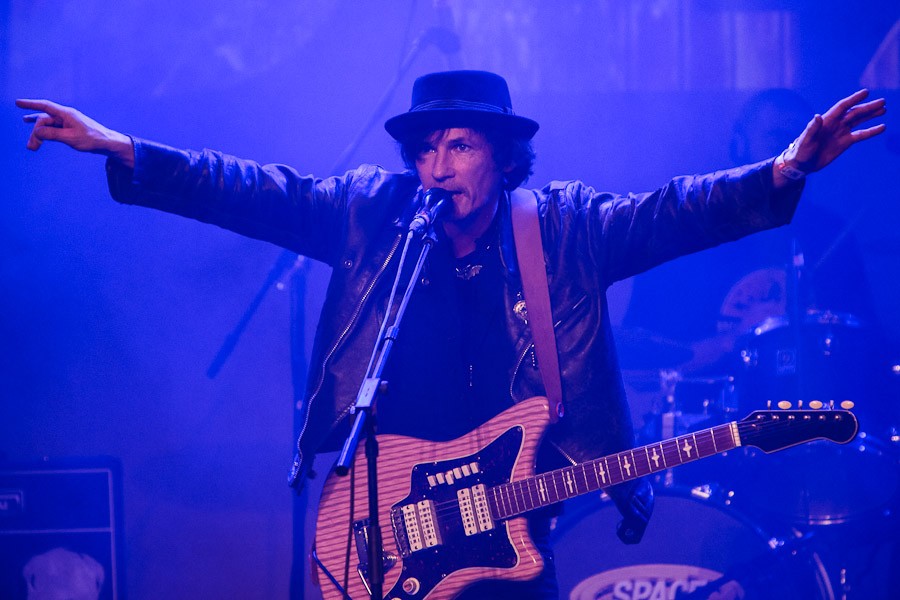 Welcome to the Freakshow, Getintothis’ Del Pike pulls back the curtain on the craziest sideshow in town, and finds Scouse psycho legends Space on fine form.

The Epstein is the perfect venue for a Space gig.  As tempting as it is to use the term “faded glamour”, we will resist.  It’s not faded, it’s beautiful and it feels like an old time musical hall, not dissimilar to the one seen at the end of David Lynch’s The Elephant Man film.  This is more relevant than you might think and this really is the perfect venue.

Brasshaus open tonight and this is the third time in as many months that this writer has seen them.  The doorman was selling them (to those punters unsure of whether to go in early or grab a pint in the Post Office) as “like Joy Division” but they’re not really.  More like The Jam.

This young Liverpool three-piece have the punchy attitude of any of those 1979 post punk acts, but still need to find variation between tunes and better banter.  Much like their appearance supporting Rain at the Magnet recently, they are often incredibly self-critical, the second the crowd fail to respond to their liking it is remarked upon. This is a shame as their output is certainly likeable, they just need to find the confidence to accept their current support slot status and realise that the crowd is not necessarily there for them.

Tracks like Go, with its menacing delivery offer a slightly less obvious approach to their other songs and regular closer Mr Kennedy is clearly their killer tune as the spirit of Weller and Foxton runs through the guitar work and the drummer channels Keith Moon.  It was always going to be difficult for Brasshaus in fairness, as the audience tonight for Space felt like a mass of family and friends rather than paying nostalgics, Brasshaus couldn’t compete.

Tommy Scott’s band enjoyed their moment in the sun during the mid-90s with a string of commercial hits that were never off The Chart Show.  Great tunes with great videos, that never failed to thrill but never made the impact of other bands of that era, such as Blur and Oasis.  What set Space apart could well be Tommy’s weird, off-kilter vocals, an acquired taste certainly, but a voice that worked perfectly against the strange lyrics about serial killers, local psychos and 60s spy-chic.

Those who lost interest after the first two albums may well have forgotten how unusual Space are.  Their pre-show shenanigans remind us of this with projections of Victorian freakshow banners and the theme from The Elephant Man drifting in and out.  A sideshow barker tempts us in and we hear Come Look at the Freaks from the Broadway hit Sideshow.  Listen to the full song and see how much it sounds like Space once the theatrics kick in.  When Tommy emerges from the darkness in his black hat and waistcoat, he resembles a sideshow barker himself, of the Jim Rose variety, but despite the other worldliness that runs through tonight’s show, this is also a celebration of Liverpool culture and there remains a sense of down to earth warmth and the band are clearly revelling in it.

That said, opener Charlie M, with its leering images of the manic Mr Manson looming over the stage starts the set on a twisted nerve with the pitch dark Drop Dead hot on its heels.  Tommy has lost none of his sneer, but has dropped the elder statesman look that adorns the publicity shots, looking more like his old self – cheeky grin, tousled black curls and remarkably youthful.  He told this writer after the show that I had hair like him only I was better looking.  Fair comment and thank you Mr Scott.  Mr Psycho rounds up the trio of exercises in black comedy.  Much of the set is made up of favourites from the first two albums Spiders and Tin Planet and the audience are clearly thrilled to hear long lost gems like Begin Again and the ever wonderful Avenging Angels once more.  The Ballad of Tom Jones, introduced as an obscure B side from 1963, hits new levels of oddness with the distended floating head of collaborator Cerys Matthews floating above the stage, almost but not quite matching Tommy’s vocals.  It’s not hologram Elvis in Vegas but novelty value trumps perfection hands down.

See our review of Space at this Summer’s LIMF here.

Space hold the crowd intently throughout the set, only losing a few to the bar with the low key Boy Like Me, which is too safe for a band who only half an hour earlier set themselves up as genuine freaks. New single Strange World is much more on the mark, sounding like it has been lifted from the soundtrack of an old episode of The Twilight Zone, staggeringly Americana – retro and tantalizing.  Liverpool photographer, Mark McNulty’s creepy music video places them in the house of a real life South Liverpool dweller who fills his house with creepy dolls and grotesque religious nick-nacks, a natural home for these musical misfits.  Tonight’s rendition is helped along by Martin from city veterans, The Wizards of Twiddly and is all the better for it.

Burn Down the School is introduced by Tommy as being about an old friend of theirs from Canny Farm who literally burnt down the school and for three minutes everyone regresses into that rebellious fantasy that we’ve all had at some point in our childhoods.  Tommy clearly cherishes the experience of a homecoming gig and regularly comments on the ‘bossness’ of it all and how much he loves us.  This obvious joy emanating from him lifts the spirits constantly.

Clearly trademark tunes Neighbourhood, still strange after all these years, and the widescreen cinematics of Female of the Species are the sure-fire tracks that get everyone out of their seats and swaying as one but the absolute highlight of the evening was the totally bonkers encore.

Starting with their frenetic cover of The Animals’ We Gotta Get Outta This Place, Tommy then invites everyone onto the stage. A couple of girls have already skipped across the stage earlier on, but now the band are engulfed behind fifty plus Scousers in various stages of intoxication.  A second bout of Female of the Species begins and microphones are handed out to tipsy ladies at the front.  The spectacle is beautiful; pissed people having the times of their lives.  Even a lady who had spent the entire gig in a wheelchair at the front manages to clamber onto the stage, hanging on to fellow revellers for fear of plummeting off the edge.  People are still singing “How can heaven hold a place for me…” as a sweat soaked Tommy joins the audience for selfies, hugs and admiration.  Just when it feels like the party could go on forever, a lady falls into a heap behind some seats, we all (including Tommy) hoist her to safety and we are promptly asked to leave by the stewards.  For a moment it felt like one of those “we are scouse” moments in an Alan Bleasedale play.

A crazy, unpredictable and hilarious night that could only have happened in this city. Space are one of the unsung heroes of the Liverpool music heritage and tonight proved that they are well worth re-evaluating.  They possess a brilliant back catalogue of songs and a sense of humour to match.  Definitely a sideshow to remember. Come look at the freaks. 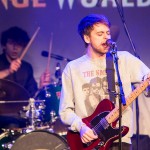 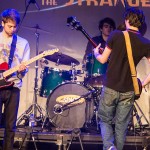 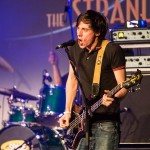 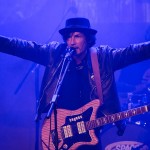 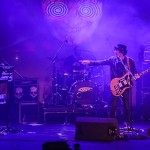 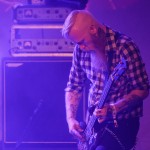 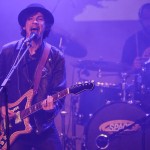 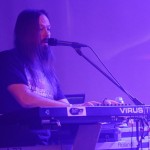 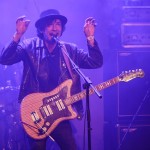 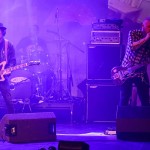 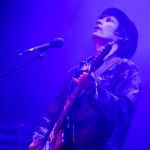 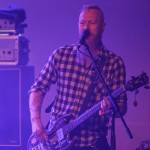 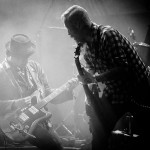