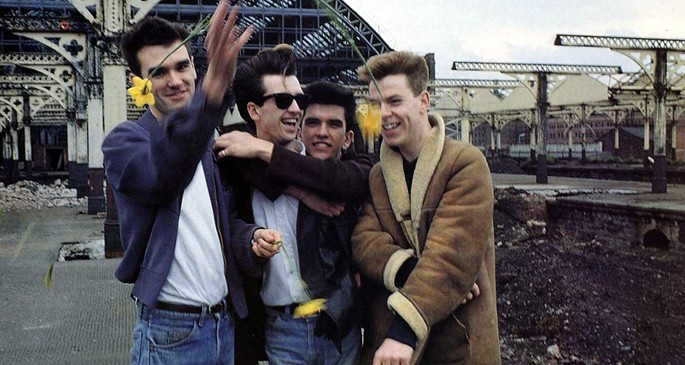 Have all photos of Hibbert as a Smith been destroyed? The original bassist suspects so.

As embittered original Smith Dale Hibbert takes aim at his former bandmates in new autobiography, Getintothis’ Del Pike finds little to recommend – as it even manages to out-gloom Morrissey.

Dale Hibbert’s account of his failure to permanently secure his status as The Smiths’ bassist is an uncomfortable read. While claiming repeatedly that he is not bitter, it is clear that he has not let this one go lightly.

Hibbert is a troubled soul, a sufferer of depression and a host to Aspergers Syndrome, life has not been easy for this Northern soul who for a very brief period transcended his job as studio technician to play bass in one of the most influential British bands of our time. Although a must for Smiths completists in need of Hibbert’s side of the story, it lacks any real interest for anyone else in search of the usual Rock n’ Roll mythologizing of your average music biography. At times it feels more like a reference book for potential fellow depressives.

Possessing a profile seemingly appropriate to the band, Hibbert experienced a tough Mancunian upbringing; his mother died when he was just eight days old and he was left to fend for himself by his father who worked long hours at Granada Television. Living with his Nan during his teenage years we are made privy to the expected adolescent fumblings and musical likes and dislikes that led to his status as a troubled young husband on the edge of the Manchester music scene. Buzzcocks and Joy Division are duly name-checked.

Were The Smiths the real masters of album artwork? Find out here

Hibbert seemed to fall into his role as a Smith almost by accident and it soon becomes clear he was not made particularly welcome. The cover blurb claims that, “with Morrissey’s arms around Hibbert’s waist, they rode the streets of Manchester”; there is no evidence of this Butch and Sundance routine within the pages. Morrissey is painted as rude and stand-offish throughout his whole tenure in the band, certainly not Hibbert’s buddy. Although being painted in a comparatively favourable light, Johnny Marr is still portrayed as flighty and rather shallow. The contemporary Marr is also criticised for his dyed hair, Hibbert suggesting he should grow old gracefully like the tubby Moz.

Despite Hibbert’s apparent nonchalance surrounding his less than warm relationship, he has little to say about his band-mates other than sour criticism. Marr is given some respite when Hibbert pities him for having to carry out Morrissey’s marching orders on the evening he is unceremoniously ejected. This is clearly added to stoke the flames of his dislike of the frosty frontman.

His experience as a Smith takes in the recording of early demos and one performance: their debut at Manchester’s Ritz Ballroom, supporting Jazz funksters Blue Rondo a la Turk, and being forced to play in front of the stage rather than on it. Hibbert remains adamant that his performance on both tape and live was strong and he still cannot fathom why he was usurped by Andy Rourke.

If he is as true as his word, the reader can only assume that his dismissal was due to personality clashes. Hibbert’s string of failed relationships and doomed marriages suggest that he may not have been the easiest person to rub along with. The 1982 demo of The Smiths with Hibbert are atmospheric but do not give any real insight into his abilities with the workmanlike bass lines that typify their early work. Hibbert’s bitterness extends to the fact that, despite many searches, he cannot find a photograph of himself in the band.

A conspiracy theory (of sorts) emerges when he suggests a Smiths insider may have tracked down all existing images only to destroy them and erase Hibbert from the story. He truly believes he was hated within the ranks of The Smiths. He believes that the reason Morrissey and Marr did not prosecute him for making their early demos public was because this would show them admitting that he was once indeed a band member.

The rest of the book is reminiscent of the Austin Powers scenario where we see what happens to the families of Dr Evil’s henchmen after they have been bumped off. Hibbert’s life beyond of The Smiths is typical of any Manchester muso you may care to meet and, while he playfully namedrops and shares his experiences in the studio, nothing really happens that merits a full autobiography. The story would have worked as a fascinating extended interview in a music monthly and  life after the band becomes little more than padding.

Hibbert writes well enough but there is not enough to fully engage. Perhaps the most off-putting aspect is his attitude towards his own father’s parenting skills when his own children (all eight of them) appear to be similarly ignored beyond financial suppport as Hibbert takes exile in Prague or continually seeks solace in the arms of other women. Often his views are a little difficult to cope with, describing his current wife Svet as being able to “work as hard as a man” is a particularly uncomfortable comment.

In fairness, and Hibbert alludes to this himself, his personality traits are often a result of his Aspergers and he openly discusses his difficulty in relating to others as a result of this. Towards the end of the book following a diversion concerning his obsessions about coffee, that is not dissimilar to Morrissey’s flights of fancy in his recent novel, List of the Lost, Hibbert comes clean about his inability to communicate with people, including loved ones, “People annoy me, they annoy the fuck out of me actually. They don’t mean to but they do. I am too selfish to be a good father.  I need my own space.”

Hibbert manages to write a book that while just about beating Morrissey’s Autobiography in the gloom stakes, but lacking the humour, succeeds in showing that it is possible to live a fairly normal existence outside of Aspergers and severe depression. Despite failed suicide attempts, Hibbert finds ways to get through and in some strange twist finds calm in the mundane.

In many respects the book is mis-targeted as a music biography and perhaps its focus should be as a self-help book rather than a piece of unofficial Smiths merchandise.