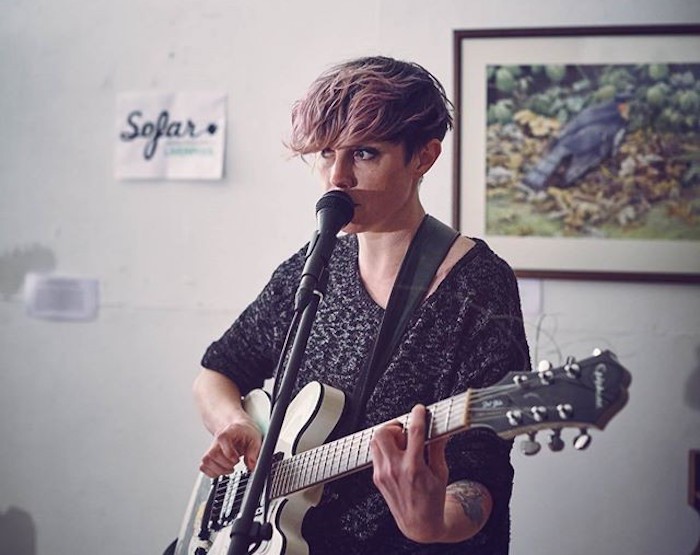 She Drew The Gun by NOISO

With the phenomenon of artists playing gigs at people’s homes taking off, Getintothis’ Cath Bore explores just what makes house gigs so special.

From 1920s onwards in Harlem, New York, the African American community held rent parties to cover the sharp increase in rent by landlords cashing in on the influx of labour from the Deep South. They hired a jazz musician or blues band to play at an apartment, served up a good nosebag of fried chicken and potato salad, and charged a cheap door tax. The cash raised paid the rent for the next month. Rent parties are seen as an integral part of the development of  jazz and blues, Fats Waller cutting his teeth there, playing in front of small but keen audiences wanting to let off steam and have a good night.

The house gigs of now are the modern day equivalent, and they’re getting more popular. Musicians are increasingly opting to play in fans’ homes in front of a – usually, but not always – modest audience, in living rooms, garages and gardens. Leaving out the middle man, no agent or promoters taking a slice, the punter not ripped off by ticket fees, house gigs are arranged by the artist themselves directly with fans. It’s actually quite punk, the very definition of the DIY aesthetic. As inventive musicians search for income streams to cover the deficit left by decreased record sales, house gigs are a viable option.

Henry Priestman formerly of Liverpool group The Christians and now a solo artist, has enthusiastically embraced house gigs since his first one in 2010.  He plays a mixture of conventional venues and private homes around the UK.

“I’m lucky enough to have performed at Wembley Arena with The Christians in 1990, and also at some of the other vibeless UK Enormodomes,” says Henry, “and after the initial thrill of, wow, so that’s what 10,000 people look like, it was like any other gig…actually no, it was not as much fun as any other gig, you couldn’t see people’s faces, people at the back were miles away; it all felt very disconnected.”

As an artist, what’s the difference between house gigs and normal shows? Whatever normal means…

“There’s definitely an informality to them (house gigs), which immediately seems to put people at their ease, even if they’ve never heard a note of my music before. The closeness in proximity of the audience adds to all this, as does the unsure expectancy. Many house gigs I play are the first ones most of the audience have ever been to.”

Mel Underwood is Sofar Sounds Liverpool’s organiser. The international project puts on gigs in homes and unconventional spaces in countries all over the world, featuring names as diverse as Will Young, Bastille and Karen O.  Like other house gigs, Sofar shows can be a full band, acoustic or stripped down, depending on the size of the space. The line-up of shows is not revealed until the night itself, each artist playing up to a handful of songs, and rewarded with a film of their performance.

The last Sofar Liverpool show featured a tasty menu of X Factor survivor Lucy Spraggan, Glastonbury emerging talent 2016 competition winners She Drew The Gun, who play the festival’s Pyramid Stage this summer, King No-One from Leeds and singer songwriter Chris Woolf. Private gigs, Mel reckons, are special because “The experience is so unique every time and also because there aren’t that many people sharing that experience with you it makes you feel like you are a part of something special – a one off that no one else gets to see.”

“If I had to choose between a living room and a commercial venue it would be a living room every time! Nothing compares to someone opening their home to you for the evening and sharing their space with others in the name of music. It really has that community feel and a level of trust.”

Liverpool’s Natalie McCool has been playing house gigs for some time now and is shortly to embark on a 12 date house tour. Back in March she put out a call for people to get in touch if they wanted her to come and play in their homes, with a list of towns and cities. The response was phenomenal.

“Beforehand there is such a huge anticipation from everyone in the room – and then an amazing silence from the audience when you begin to play,” Natalie tells us of the house gig experience. “You can hear a pin drop – it is so so intimate. Quite intense really – but in a lovely way. I love filling that space with my voice and singing my stories about everything from incredibly personal experiences to my innermost beliefs and fears – it’s actually very cathartic.” 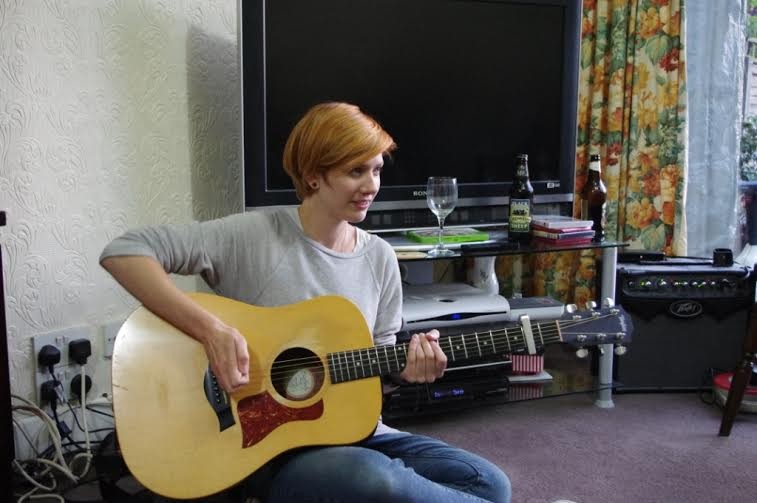 Music fan Marcus James from Birmingham hosts private gigs in his own home, now clocking up an impressive 25 shows. A combination of things started it all off.

“The first was seeing Paper Aeroplanes at a local venue, the Kitchen Garden Cafe. They performed one song completely unplugged. Sarah Howells’ voice is incredible and the lack of electronics colouring the sound along with the balance they achieved between guitars and vocals was a revelation.  From that point on I attended gigs attempting to recapture that experience, but seldom managing it.

“I started to investigate housegigs in the hope of finding one near me, I did find and attended, and still attend, Sofar Birmingham (Sofarbrum) gigs.  These were great and showed me house shows in regular non-American (huge) houses were possible.  The final thing, and one I’m eternally grateful for was the artist Kimberly Anne offering to play house shows as part of a tour.  My initial response was very hesitant, along the lines of “If you were willing to play Brum, and didn’t have a better offer, might you consider mine?”.  After that my second house gig was Rhiannon Mair as part of a pledge reward.  I’m pretty much hooked now.’

Marcus’ shows host between 11 and 26 people, although he admits, it does get “cosy” when there’s a full house. I can attest to this; at housegigs you get to know the other people in the flat or house very well indeed, people sitting elbow to elbow, hip against hip.

“I’m doing this for my enjoyment, my friends are only there to stop it looking weird,” says Marcus. “The artists definitely get paid an agreed fee but are very generous with their time. I hope the artists get an enjoyable night playing their music to a quiet and appreciative crowd. They get to experiment and try new things out in a safe environment. They get to talk about their songs and get to hear how their music affects people on a very personal level.”

One of the things I like about house gigs is the respect given by the audience. The audience talking during gigs when an artist is performing is a big bug bear of mine. At house gigs there is no gassing at the bar, partly because there isn’t one. Everyone in the room wants to be there, they haven’t been dragged along by a mate and even if they have, they get into the house gig vibe. Many fans-turned-hosts like Marcus really get into putting these shows on, wanting to arrange as quality an experience for audience and artist.

“I’ve been to many brilliant live shows at many great local venues but occasionally there’ll be one noisy person or group and that can ruin a show.  At house gigs everybody knows each other, even newcomers will know half a dozen people by the time the music starts, so no one talks during songs.  If they did they’d get shushed, and failing that I’d ask them to leave,” he says.

“Hosts are so generous and welcoming to you,” reveals Natalie. “It’s the sort of gig/tour I imagine folk artists were doing back in the day, artists like Bob Dylan and Paul Simon. I am not a folk artist but it feels just as humble and vital to me as it probably did to them.”

I ask Natalie if she takes someone with her, because I’m assuming she doesn’t go to shows on her own. How does that work? Is there an element of risk, a woman going into a stranger’s house?

“Obviously yes you should be very careful and take precautions when entering any persons home who you have never met before. I always trust my gut feeling and if someone looked or sounded wrong then alarm bells would start ringing and I wouldn’t entertain the booking. But I’ve never felt unsafe doing any house show. Maybe it just attracts the type of clientele who are just…well…really sound.”

Helen Stephens is a producer who is currently filming a documentary on house gigs, filming Henry Priestman as he performs shows with his guitarist Les Glover.

“When we started looking into them (house gigs),” she says, “I was fascinated by how they worked. Why anyone would put a gig on in their home and whether there was a set format for how they were arranged. What I find more interesting is that there doesn’t seem to be any rules. Each one we’ve attended has been different.”

“Often you go to a (conventional) gig and the tallest person in the room blocks your view or people talk all the way through it. They’re unpredictable and unfortunately your enjoyment of a concert can sometimes be determined by the other members of the audience,” she adds.

“Many of these gigs are organised by people who love the music, and perhaps want to spread it out to their friends,” says Priestman, who has 30 house gigs booked for 2016 already, with more to come. “One person in Norwich said “well, you never play over here in Norfolk, so I thought I’d just book you myself.”

I’ll leave the last word to house gig host Marcus. To him, house gigs are a win-win. And he’s never had anyone playing the rockstar in his home. Not yet, anyway.

“Every artist has been an absolute joy.  Some have been shyer than others, some genuinely don’t seem to realise how great they are.  I’ve had many late night drinking sessions, one ended at 4am when the conversation revealed the artist was an insomniac.  At that point I gave in, gave them the TV controls, pointed out my graphic novels and told them to help themselves to the whiskey.  We’ve had the odd coincidence such as an artist singing about an extended family run farm in the Highlands, only to find an audience member recognises the farm and knows the family.”

And he’ll say no more, because….”what happens at housegigs, stays at house gigs!”