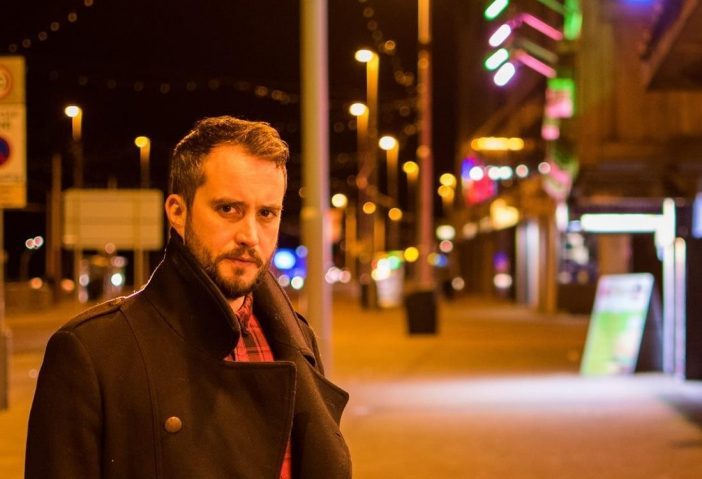 It’s that time of the week when you are challenged to step outside of your comfort zone and experience music from the other side with Getintothis’ Mike Stanton.

It’s September and two of the artists featured this week have albums out this month so it’s a good time to shout about them a bit. A little more synth-heavy than last week, it’s ace that we can feature Mark Lawless, an Emotion Wave alumnus and all-round top bloke and Rykard who has been releasing his form of lo-fi electronics for a few years now. However kicking things off this week is Sand, all Beach Boys inspired harmonies and dream-gaze lushness.

Sam Healy of Edinburgh-based electronic and post-prog rockers North Atlantic Oscillation has a solo project called Sand. Similar in sound and song construction to NAO he is trailing his second album A Sleeper, Just Awake with the track Commitment To The Bit and it is glorious. I mean proper full-on head-swimmingly glorious.

Influenced by the elegant and sophisticated styles of 1970’s bands like 10cc and ELO, Healy draws on complex arrangements throughout the song while never losing the hazy vibe of modern dream pop. Multiplex rhythms and layered song structures treat the listener to a fully-immersive and captivating experience.

Guitars, vintage synths, electronic-glitch and ethereal vocals blend into a dense psychedelic mix with more than a hint of Pink Floyd. Healy’s plaintive falsetto is a perfect counterpoint to the lush melodics swirling around Commitment to the Bit. Dreamy, almost shoegaze-like in atmosphere, this is pure dream-pop stardust and anticipation for the release of his second album on September 30 is building.

Mark Lawless is a Liverpool-based producer and deals in a diet of mainly ambient techno mixed with a sprinkling of deep house grooves. Already becoming a regular live performer, his understated electronic vibes can shape all moods and he can often be found playing to small clubs and underground venues throughout the city and beyond.

His latest release Leyo is a glowing ember of a track. Lawless just nails a low-level late-night vibe with the smooth synth lead, rumbling bass and 4/4 beat. There are elements of the more melodic Aphex Twin (circa Selected Ambient Works 85-92) with sweet Boards of Canada refrains sprinkled throughout.

Lawless has created space and texture in Leyo that allows the gently undulating melody and light-trip tempo interplay causing a shifting resonance and falling analogue shadows. Mark Lawless is an artist who is very much in the ascendance and surely bigger things beckon.

Rykard is a producer of ambient electronica from beneath the elephant-grey skies of Lancashire. His debut album Arrive the Radio Beacon in 2010 caused ripples across the globe with his blend of ambient atmospheric bliss.

Comparisons with Boards of Canada are inevitable. However, he has forged his own sound. Ictis, the first teaser for his new album, Luminosity, is as wide and expansive as the County he hails from. Opening with a hint of 808 State’s Pacific State, Ictis emerges into slow-chilled trip-hop beats, dub bass and shimmering synths that mingle to produce trance-like melodies. This dark-edged, introspective and contemplative mood allows the listener to create their own journey.

Ictis is a stunning arrangement of atmospheric electronica dabbling in delicate melodies and dimensional flurries.

Luminosity is set for a September 17 release.