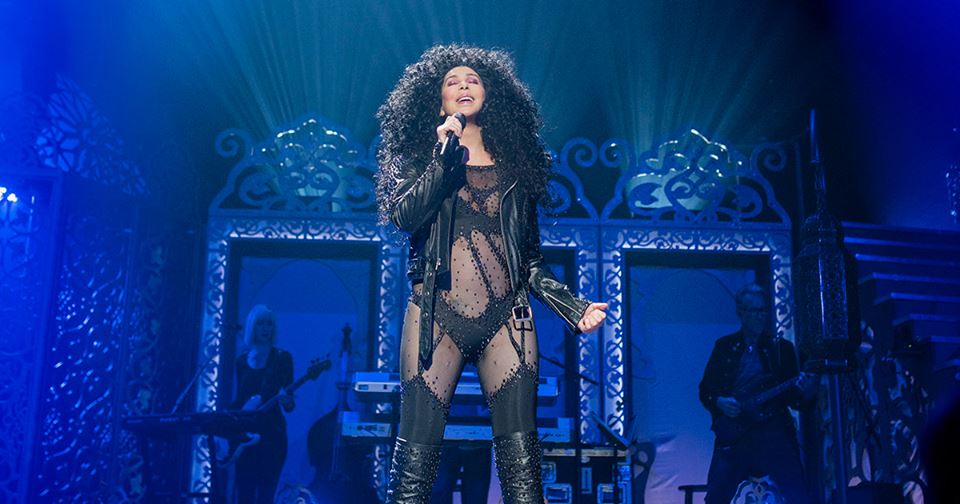 After over 50 years, Cher is still a household name.

From her start as a backing singer working with Phil Spector to her movie roles and incredible fashion, Cher has been consistently in the limelight with an ever changing image for over 50 years.

There hasn’t been a time in life where Cher wasn’t just general knowledge as if she has become part of the atmosphere and fabric of life with the majority of people probably having fond memories of their parents playing her music or watching Mermaids on a Sunday night on Channel 5 or even when the video for Believe seemed to take over music channels.

She has won Emmys, Grammys and Oscars, meaning she is only one award away from the legendary EGOT, a small group of artists to have won all of these awars, plus a Tony (so just give her the Tony already!), and has been inspiring people for years from The Shoop Shoop Song to If I Could Turn Back Time, Cher’s influence spans generations with 25 studio albums not including her soundtrack, Live, compilation albums. She has ultimately been held up as an iconic diva of the ages as a woman who fully embraces who she is and the strength she exudes. Even in the age of social media and the internet creating it’s own icons, Cher has remained at the top of the list.

Cher has stated that Hollywood doesn’t consider her an actress, and the music industry doesn’t consider her a singer. But this is not to her detriment. So few people have been so successful in all of these areas. Have you seen Elvis and Madonna films? They’re horrible! Have you heard Eddie Murphy‘s albums? Sickening! No matter how talented she is, Cher isn’t a singer, she isn’t an actress. Cher is simply Cher – the ultimate pop icon. 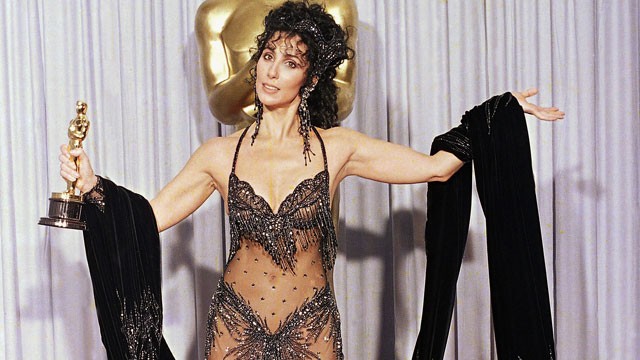 Cher after winning her Oscar for Moonstruck in 1988

Even from the beginning of her career with first husband Sonny Bono, Cher did everything, from the albums they made to their variety show and the comedy sketches, you can see  the beginnings of the star she would become.

Cher met performer Sonny in November 1962 when he was working for Phil Spector. He introduced her to Spector, who used her as a backup singer on many recordings. If you listen extremely closely, you can just about make her out underneath all of Spector’s production on icon songs like The Ronettes‘ Be My Baby and The Righteous Brothers’ You’ve Lost That Lovin’ Feelin’.

By 1965, Sonny had written a duet for the two of them in I Got You Babe, a worldwide smash that endures to this day. Further hits, such as The Beat Goes On and Baby Don’t Go followed, but eventually Cher began to outshine her partner, and solo hits such as Bang Bang (My Baby Shot Me Down) – later popularised by Nancy Sinatra –  were as regular as those released as a duo.

Her dry sense of humour and incredible voice paired with costumes which captured the imagination and eyes of everyone, made her a force to be reckoned with and further made her a household name to allow for her to expand to all of the areas of creativity which she wanted to conquer.

It is unsurprising that she did conquer. From the folk-tinged pop of her early recordings, to the disco diva of the late 70s, the rock songs of the 80s, the european dance of Believe, to wholly uncommercial albums like 1994’s surprisingly dark Not.comm.mcercial, and even hooking up as a featured vocalist on tour with Gregg Allman in 1977, she really has done it all.

Sonny and Cher made some small films in the 1960’s, none of which were particularly successful. The last of these, Chastity, bombed so badly that it deterred her from acting until 1982’s Come Back To The Five and Dine, Jimmy Dean, Jimmy Dean. After that, she scored a role alongside Meryl Streep and Kurt Russell in 1983’s Silkwood, and eventually snatching the Best Actress Oscar for 1987’s Moonstruck from under Streep‘s nose.

Rather than being content to playing a one dimensional token female character, Cher consistently plays complex and well thought out roles. In the hands of a lesser actress, some of these could have been easily dismissed.

Take her celebrated role in 1985’s Mask, the true story of Rocky Dennis, a young man suffering from the rare disfiguring disease craniodiaphyseal dysplasia. Cher played Dennis‘ mother, Rusty, a role that was a far cry from her glamorous image.

When the real Rusty Dennis signed off on the movie, she was unaware that she would be playing a prominent role in the film, and praised Cher for her role in a 1986 interview; “I thought Mask was going to be a movie about Rocky. I always thought showing Rocky‘s courage would help a lot of disabled kids and the parents of disabled kids–sometimes they are more disabled than their kids. I didn’t realize the movie would be about me, too. Thanks to Cher‘s brilliance, I come off a kind of heroine.”

Instantly recognisable in style and voice, Cher always does look and sound like Cher, and the power of her personality is palpable. She disappears into her characters, and eventually the audience forgets that it is a Cher performance they are watching and instead being carried away into the world of the struggling single mother in the 60s (1990’s Mermaids) or a wealthy American in pre-war Italy (1999’s Tea With Mussolini) or a strong-willed widow in 1980s Brooklyn (1987’s Moonstruck), she is always willing, it seems, to pursue roles for their merit rather than for any service they could do for her image.

Fashion and Cher go together like Thelma and Louise or Morecambe and Wise. They need each other.

So in 2015 when she became the one of the new faces of Marc Jacobs campaign it made complete sense.
With 25 albums under her belt, several movies, a TV show and a stint on broadway, the reinvention of her style is the best way to transfer her personality to each area of creativity. The ever changing hair, an incredible set of wigs, which she made look effortlessly amazing allowed everyone to gaze longingly at the different moods of Cher and see themselves, the same coloured hair or the same hair length. She became an ideal the people projected their dreams onto whilst she was brave enough to march forward with the chameleon like style.

Her looks are as iconic as her songs, from the stage outfits which tell the story of each albums aesthetic to the Oscar dress by Bob Mackie which truly stole the limelight.

In true show-womanship and in the hands of anyone other, this could stray into the ridiculous. But with confidence she pushed boundaries giving inspiration to many who to wanted to dance and sing their hearts out in glitter covered garments with feathers and sequins covering our sleeves and shoes.

And she is still doing it, with a wink, a smile and a knowingness of the silliness, which makes the outrageous costumes work better than ever. Check out her monologue from this show from 2014; “I’ve been a transvestite pinatta, I’ve ridden an elephant and pissed off half the young female singers in the universe by going ‘Follow this, you bitchaz!’ And I can still get into my Turn Back Time costume – and I’m almost 100. But I still think ‘”What do they want from me now?’ And I thought ‘You’re being a silly drama Queen”, you don’t anything. You want me to come out, be ridiculous, sing in funny costumes and be fabulous“.

During the 70’s, the single best career move for an actor or musician was to host their own variety show. Sonny and Cher had been down on their luck. The hits had dried up, their conservative, anti-drug stance was out of favour with the hippy movement, and they were relegated to performing an unpopular nightclub act. When they were heckled – which was often – Cher heckled the auidence back. When Sonny would chastise Cher for heckling the audience, she would heckle Sonny. Eventually, TV executives took notice and The Sonny and Cher Comedy Hour began broadcasting in 1971, proving to be a ratings smash.

Following their divorce, both Sonny and Cher had their own solo shows. Sonny’s was a flop, but Cher’s matched the success of the duo. The Cher Show began in 1975 and with it came the most incredible outfits and guest stars who performed medleys just as bright and shiny as the sequins which covered the stars.

The outlandish costumes and sets and bizarre the medleys with Elton John and Bette Midler or Tina Turner or David Bowie all appear to be other worldly and have the appearance of a dream state in the best way (if only dreams were in the realms of The Cher Show).

But the very best of the bunch is this clip featuring Cher being pulled between heaven and hell. Heaven is represented by Dolly Parton and a gospel choir. Hell is reperesented by The Tubes. This is the single most bizarre thing to be broadcast on prime time television. It genuinely has to be seen to be believed.

The Vegas residency can be an iconic moment for artists, stretching back to the days of the Rat Pack, and the indulgence of Vegas with the extravagance of Cher makes for the perfect pairing. For some, Vegas is where old artists go to die, but with Cher it just makes sense. Of course she is performing a residency in Las Vegas! Of course it is going to be fabulous!

Despite the stigma that could be attached to Vegas, Cher has performed several residencies there throughout her career, beginning in 1979, and it has never been a settling moment. She has continued to make albums and movies.

Her latest residency is called Classic Cher. It began in February and runs until November. Check out the wonderfully ridiculous opening.

From Psycho to Pride – the evolution of LGBT cinema

Since 2010, Cher has taken to Twitter like a fish in water. Many celebraities haved dabbled with Twitter, but she dove in head first. Her enter personality seems to pour out into her tweets from her current politically driven tweets holding Trump and his staff accountable to her interactions with fans and her insights into the glorious life she leads.

Her political stances do not stop with Trump, with a long standing relationship and being held as an icon of the movement, Cher holds a special place in the hearts of the LGBTQ community and regularly shows support through twitter

From the caps lock to the abundance of emojis and exclamation marks, the tweets might not be grammatically sound, but they are authentic. In a time where the vast majority of interaction from stars are filtered through a PR team, Cher remains a heart-warmingly unadulterated version of herself. In every manner, she is a larger than life character, and her writing encapsulates that. Like Bowie, she is of another planet and keeps us in awe.

As a result of her Twitter escapades, she has gained a whole new audience with Millennials, her iconic bad assness transcending age and technology.

All of this may span as simply an incredible career, but with Cher it is always more, from the inspiration she gives to people to how she has transcended time through her experimentation in looks, sounds and roles whilst remaining a person that people just adore.

That is why Cher will always be my ultimate pop icon.

To close, here is my favourite Cher Show moment- Cher and Tina Turner performing Shirley & Company‘s Shame, Shame, Shame and a request to the lady herself – never change.