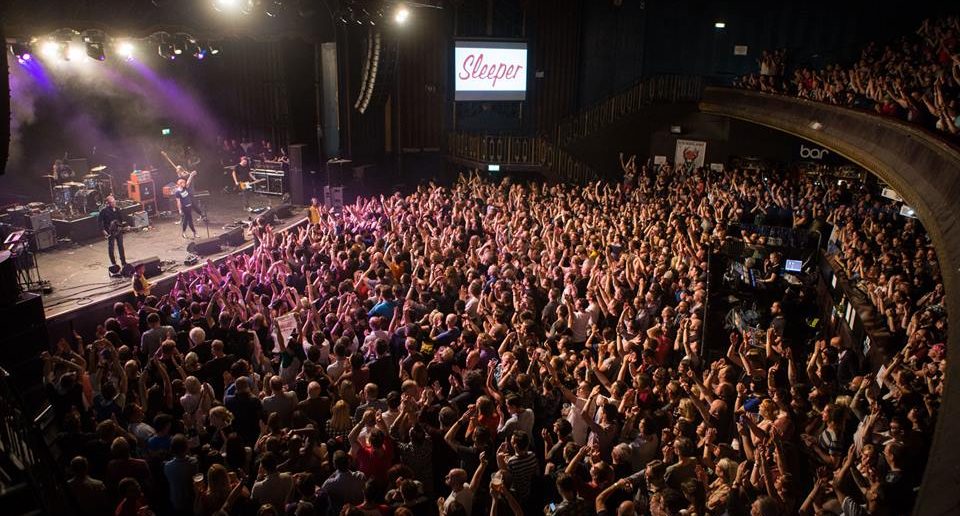 The Britpop favourites are re-awakened for a trip round the country following a London date this December, piquing the interest of long-time fan Getintothis’ Will Neville.

Sleeper are one of the main bands that rose to prominence as part of the Britpop movement in the 1990’s, but their music, frank lyrics and frontperson Louise Wener’s spiky, sparky personality ensure they have lived longer in the memory than many of their contemporaries.

Wener famously wore a t-shirt emblazoned with “another female fronted band” as a dig at the sexism in the industry at the time. Whether much has changed since is a matter of debate.

Inbetweener was their break-through single in January 1995, around the time they supported Blur on tour at the peak of their Parklife fame.

The band hit the UK Top 40 no fewer than eight times between 1995 and 1997, as well as landing all three of their albums in the Top 10 with their sound crossing the likes of The Go-Gos and The Undertones. They were a big enough part of the zeitgeist to be featured on the soundtrack to Trainspotting, with a Blondie cover, another of their main influences.

This writer saw them three times in quick succession in their heyday, headlining ever larger venues in London as they promoted debut album Smart and its follow-up The It Girl.

Third album Pleased To Meet You was less successful than the opening brace, as the anti-Britpop backlash kicked in. However, it still yielded a couple of minor hits.

While they never quite expanded their musical outlook quite like Blur, they also never outstayed their welcome like Oasis, managing not to sully their reputation by flogging the proverbial dead horse.

Following a successful stint as a novelist, Wener reformed Sleeper this summer for the series of Star Shaped all-dayers, their first shows for almost two decades, headlined by The Bluetones and featuring the likes of Space and Dodgy. Their set-lists were exclusively old numbers, heavily skewed to the first two, crowd-pleasing albums.

You can expect the punters at next year’s shows, including the first night at Liverpool’s Arts Club, to be largely dominated by 30- and 40-somethings there to relive some of their youth, but there’s nothing wrong with a spot of nostalgia now and again.