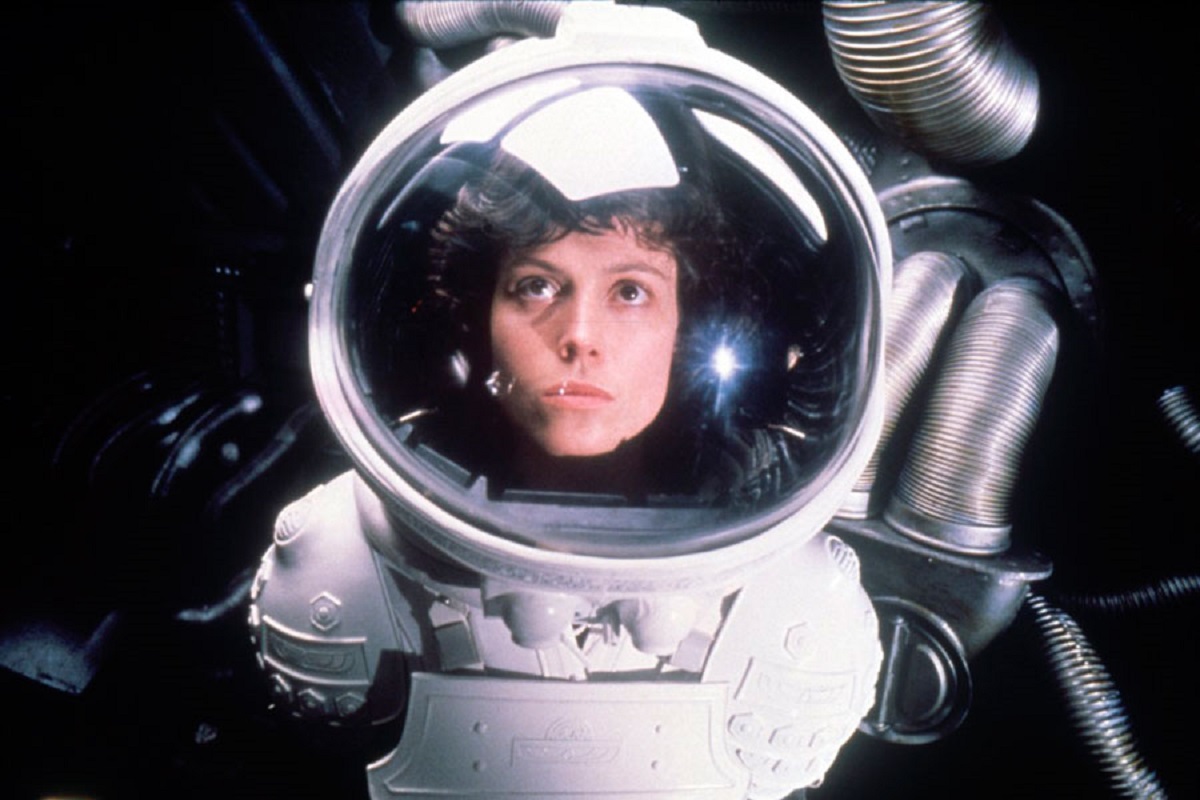 Since its release in 1979, the impact Alien has had on Science Fiction can still be felt to this day.

The film successfully ported old monster horror science fiction tropes into a more modern, gritty format and helped turn the popular perception of extraterrestrial terrors away from the Dr Who school of BBC wardrobe delights to something much more psychologically horrifying.

The careers of lead actress Sigourney Weaver and director Ridley Scott were launched allowing space to be made in the Hollywood budget for Scott’s magnum opus Blade Runner in 1982.

That same year also saw The Thing wonderfully remade by John Carpenter, but Alien had many more thematic influences on films to come.

Protagonist Ripley helped establish the “Space Heroine” in Hollywood with Jodie Foster in Contact, Amy Adams in Arrival, and Natalie Portman in Annihilation all taking obvious nods from her.

The film also presented a more noir-influenced vision of the future with darkness used as effectively as light helping aid the creation of a lurking, mysterious, seemingly invincible killer.

The premise of an exotic, extraterrestrial beast slaying a group of humans one by one was nothing new.

The original The Thing from 1951 is a direct and classic example.

The execution of the story, however, and how the beast is delivered in Alien was terrifyingly fresh and unique.

A huge part of Alien’s success must be attributed to the design of the xenomorph itself by legendary Swiss artist H.R Giger. Both he and writer Dan O’Bannon were originally scheduled to work on Alejandro Jodorwsky’s Dune, the great Science Fiction white whale of our time. 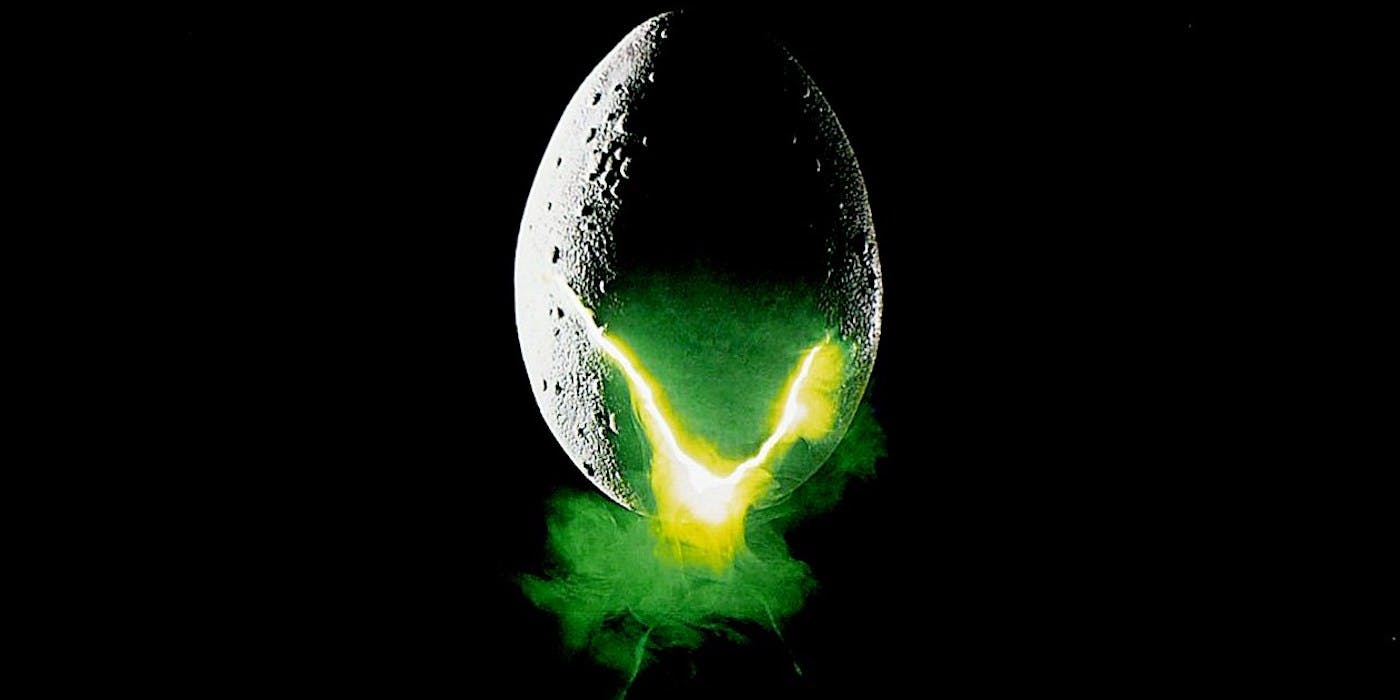 This production was eventually abandoned due to many outlandish factors which are documented in the truly excellent documentary Jodorowsky’s Dune. This legendarily crackers project would have produced a fourteen hour epic featuring none other than Salvador Dali and Mick Jagger.

Now at a loose end, O’Bannon began on the path that would lead to the writing of Star Beast – later to be renamed Alien, given how many times the word appeared in the script.

Original designs for the beast were varied, one even being a small dwarven creature, until O’Bannon showed Ridley Scott an airbrushed work from Giger’s book Necronomicon.

Painted directly from nightmares he suffered, the monster incorporated grotesque phallic symbolism as well as elegant curvature. It was just the unsettling presence Scott had been imagining after reading O’Bannon’s script, and so the die was cast.

Audiences were terrified and mesmerised in equal measure. The Alien had burst onto the scene – literally.

Talking of which, it is impossible to discuss the film without referencing its, and one of cinema’s, most iconic scenes.

The xenomorph bursting out of poor Kane’s (John Hurt) chest was as much of a shock to the cast as it was to audiences.

The script had apparently merely stated that the alien “would appear” as direction, and the stunt was kept under close wraps by the crew in order to capture genuine looks of shock on the actors faces. Veronica Cartwright (Lambert) reportedly passed out after having the fake blood sprayed on her face following the explosive introduction.

As Weaver later remembered: ‘Everyone was wearing raincoats – we should have been a little suspicious.’ 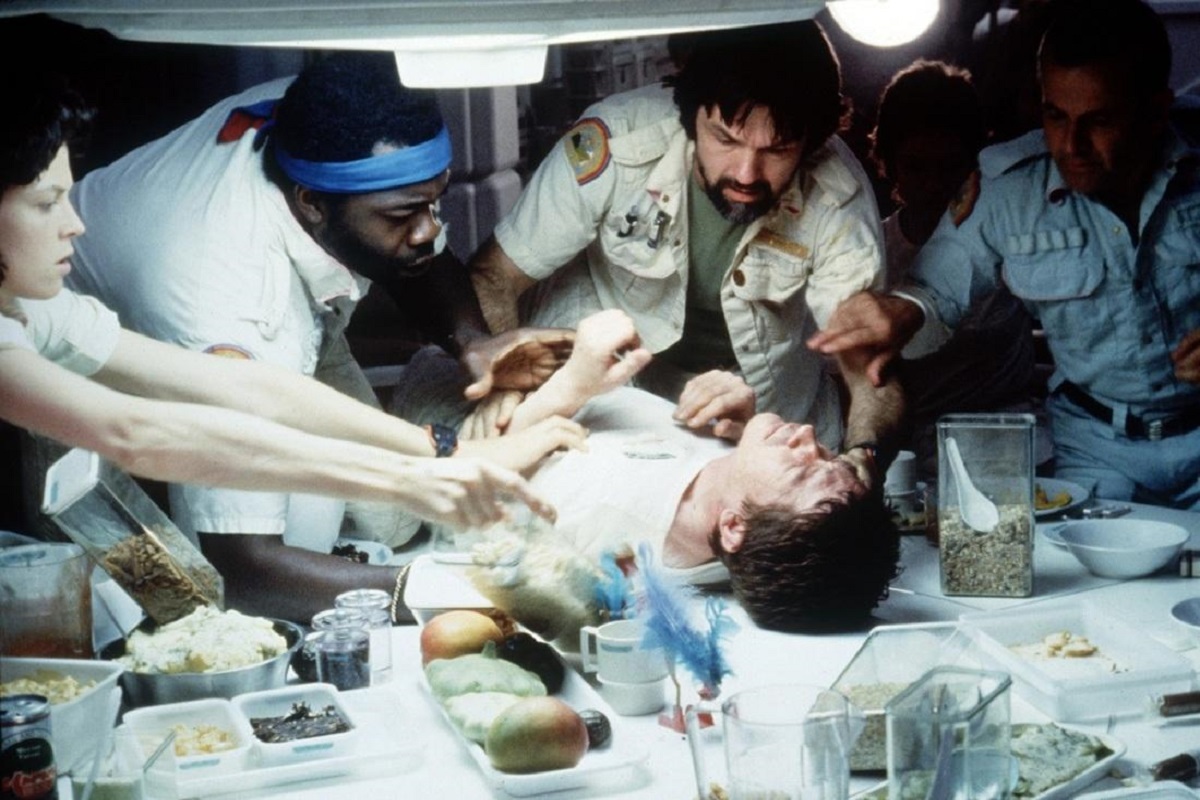 Such genuine reaction amplifies the visceral nature of the film – if the people involved inmaking the film can be affected to such a degree, then the audience will be affected on an even grander scale. This created a further separation from the idea of “it’s only a movie”.

This was mirrored in another great science fiction scene of our time; Vader’s reveal of his fathering of Luke in Star Wars Episode V: The Empire Strikes Back.

This technique of staged misdirection caught an unknowing Mark Hamill off guard to gain a true, authentic reaction. This was somewhat of a returned favour to Star Wars as Scott has said Alien was directly influenced by Episode IV, as well as the paranoia of traitorous technology in 2001: A Space Odyssey and the sheer brutality of The Texas Chainsaw Massacre.

It is unavoidable to talk about the other side of the Alien coin which is James Cameron’s superb follow up- Aliens.

It joins the list of classic films with great sequels that inspire debate over which is better – The Godfather Parts I and II, Star Wars Episodes IV and V, The Terminator and T2: Judgement Day.

Taking on a larger scale, more action-oriented direction than the original, Aliens was very much a film based on the Vietnam war, as declared by Cameron himself.

It was intended to show a low-tech indigenous force overcoming a more technologically advanced invading party. This also helped to cement some very powerful motifs into modern sci-fi – the space marines being sent on an incredibly dangerous mission, the hive of aliens controlled by a seemingly psychic Queen, the pervasive feeling of technology failing and leaving the characters to their own devices.

It is undeniable that some of its most memorable factors were simply expanded upon from the original ideas presented in Alien – the beast itself multiplied in a hellish underworld, the POV bodycams used for great dramatic effect, the tracking blips beeping malevolently. The two films are fittingly symbiotic.

The other sequels were perhaps not as successful.

David Fincher’s Alien 3 was handled in such a haphazard way that filming actually began without a set script. Expansive premises were abandoned, and the resulting mish-mash of a film left many underwhelmed.

Scott’s eagerly awaited return to prequels Prometheus and Alien: Covenant attempted to provide background to the overall story arc but fell flat in many ways.

Also, the fan-service of the Alien vs. Predator films just could never live up to the initial hype. The xenomorph’s legacy will always lie with the first two movies.

Special mention must be given to the survival horror computer game Alien: Isolation (2014). Taking reverential influence from the first two films, it successfully recreates the claustrophobic anguish of the tensest moments of the series – more so than the subsequent cinematic sequels.

If you like Alien and haven’t played this, then don’t waste any more time. A genuine monster.

Remember that if you do manage to catch Alien at its 40th anniversary screening, in space no one can hear you scream – but they definitely can in the cinema.

1. John Hurt in a bit of trouble

3. Harry Dean Stanton gets a surprise

5. I don’t fancy your chances

Win tickets for the FACT screening of Alien on March 4:

To win a pair of tickets for the screening of Alien at FACT all you have to do is like the Getintothis Facebook page, share the post below and tag in two of your friends.