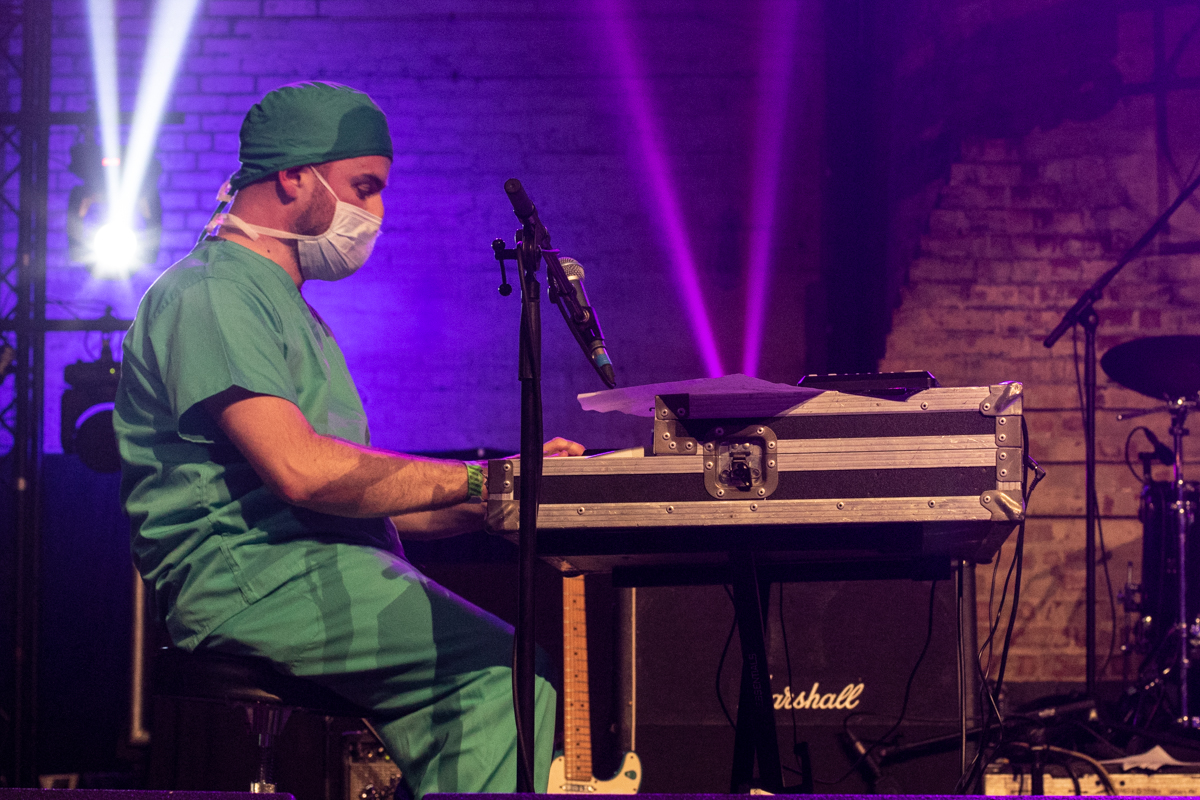 Singles Club this week has something for everyone, whatever your chosen jam. Getintothis’ Steven Doherty checks out the sound of now and the near future.

Clinic are back. Hurrah.

Sounding like the comeback single that you would hope it would be, they have lost none of their menacing madness.

The two and a half minutes fly by in a haze, their trademark extremes are all very much present and correct. Fairground noises, swirling keyboards, woozy guitars, it’s also more accessible than a lot of their earlier stuff, having more of a pop feel.

The second track taken from forthcoming album Wheeltappers And Shunters, which is coming in May, this is a wonderous return.

Another song that has a lot to say in a short space of time, weighing in under two minutes, Leeds wonky punk trio Drahla bring us a taster of their forthcoming debut album Useless Coordinates.

As well as the wall of noise middle section which features some lovely squally saxophone, the “Ancient Egypt in the palm of my hand” line really gets stuck in the head.

On tour next month, this is going to sound all sorts of barking live.

And the bangers keep on coming. After being somewhat deflated after hearing Sucker Punch, the first single from their due soon second album Musica Alla Puttanesca, we approached this with some intrepidation.

Glad to report it is an absolute corker, it’s insanely catchy singalong chorus coupled with the icy cool vocals over quite the groove, the Goldfrapp-esque feel really does give us a lot of hope for the new record after all.

Alas, they can’t all be classics, and it turns out the biggest household name provides us with the only real duffer of the week.

Seemingly the 427th single from their forthcoming album Father Of The Bride, it has none of the vim, vigour and genuine energy associated with their earlier work, as a song it goes absolutely nowhere, the concept being so clunky.

I’m sure the multi-millionaires will be distraught to hear that we don’t like it, the only way it could be any more aptly titled is if it was called Unbearably Smug.

Together Pangea – Never Said I Wanna

And now back to the good stuff.

Described as L.A Garage-Punks, which sounds a lot worse than you think, this is a supremely catchy little ditty, which sounds like it should be on a teen rom-com film soundtrack.

Everything about it is just lovely (not a word L.A Garage Punks probably hear very much), it’s summery sheen just makes you yearn for an open top car ride. Ones to keep an further ear for.

(A point off though for the accompanying press release which manages to spell the band’s name wrong in two different ways).

Bright Curse – Time Of The Healer

And now we have something of a scoop.

The below video is showing here before anywhere else in a UK exclusive for Getintothis.

Luckily for us, the song itself is a tune and a half. Heavy psych trio Bright Curse preview their first new material in three years here, with this rifftastic taste of what’s to come.

So dark, it’s doom-laden, this eight minute epic also has the visuals, courtesy of the video, to match it’s heavy outlook. Give it some of your time and your love. Now.

Not as instantly catchy as their last single, Daddy Issues, this still is a level above the raft of similar sounding indie-pop bands that seem to be currently ploughing the same quiet/loud furrow.

They tour the UK, including a recently announced slot at Sound City, in support of their debut album Boat, which is out at the end of May on Heavenly Recordings and if it’s crammed full of tunes like this, it will be well worth checking out.

The former Wild Beasts frontman previews his forthcoming debut solo album Diviner with this cut, something of a departure from his previous works.

His haunting, at times almost operatic vocals, make full use of the almost orchestral instrumentation underneath, making a beautiful, captivating noise, the chorus of which evokes the most unlikely of comparisons, in their softer moments, Erasure.

Like all good songs, each listen lets you discover a previously unheard factor to it.

Here we have that rarest of things, an artist who can accurately sum up their sound in a nutshell, without us reviewers having to think of the correct adjectives.

One-man band Podge (AKA Adam Charo) describes himself as “joyful, catchy, glitchly and uplifting”, all of which are in evidence here on this splendid cut from his self-released debut album The Hero Appears.

He could have also included self-confident and dreamlike, the influence of Japanese pop culture also to the fore.

Another one to look out for at this year’s Sound City, where he will be making his festival debut.

This is the very definition of ethereal. A sweeping, majestic haunting of a track, the subject matter (the imminent end of a relationship) may be bleak, but this is anything but.

A most unlikely tour support on Garbage‘s forthcoming US dates, now that would be an interesting night out, as this has soul and beauty rather than straightforward bombast.

Taken from her forthcoming self-produced album, she is definitely a talent in the making.

Lowly – In The Hearts

One of the bands curated by Getintothis’ for the forthcoming Liverpool Sound City extravaganza, Denmark’s Lowly bring us an odd mix of an R and B beat combined with acoustic guitar with an auto-tuned, alt-pop vocal, which shouldn’t work, but does.

The repetition of the chorus adds a certain coldness, a la Ladytron et al, and adds some elements of a dreamier, clearer sound.

Signed to Bella Union, their forthcoming second album Hifalutin could be the one that breaks them into the mainstream, another reason if needed to catch them live while you can.

In a ridiculously strong week for singles, this is yet another beauty.

Flaming Lips meets The Magnetic Fields in tone, it’s yet another song led by it’s catchiness, it builds and builds then lets itself go and you don’t want it to end, it’s last couple of minutes becoming more hypnotic by the note.

This sounds exactly like the kind of track that John Lennon would be making if he was still with us.

This is very much different to anything else out this month. After the first minute, you think you know how it’s gonna pan out, and then the vocals kick in.

So strikingly unusual, a mix of Sinkanes’ Ahmed Gailab’s American and Sudanese duality, adds a powerful message to the already urgent tune.

They have just announced they are play Field Day in London this June, and if the visuals used for this video are anything to go by, it will be some show.

Hate to sound like a broken record, but here is yet another track that in a quieter week could easily have been single of the week.

It’s mellow yet urgent, in a splendid Grouplove/Arcade Fire marching band kind of way, all grandiose with a pure pop heart.

Bayonne, hailing from Austin, has an excellent moustache, but alas no upcoming UK dates. When he does, this track will tear off the roof.