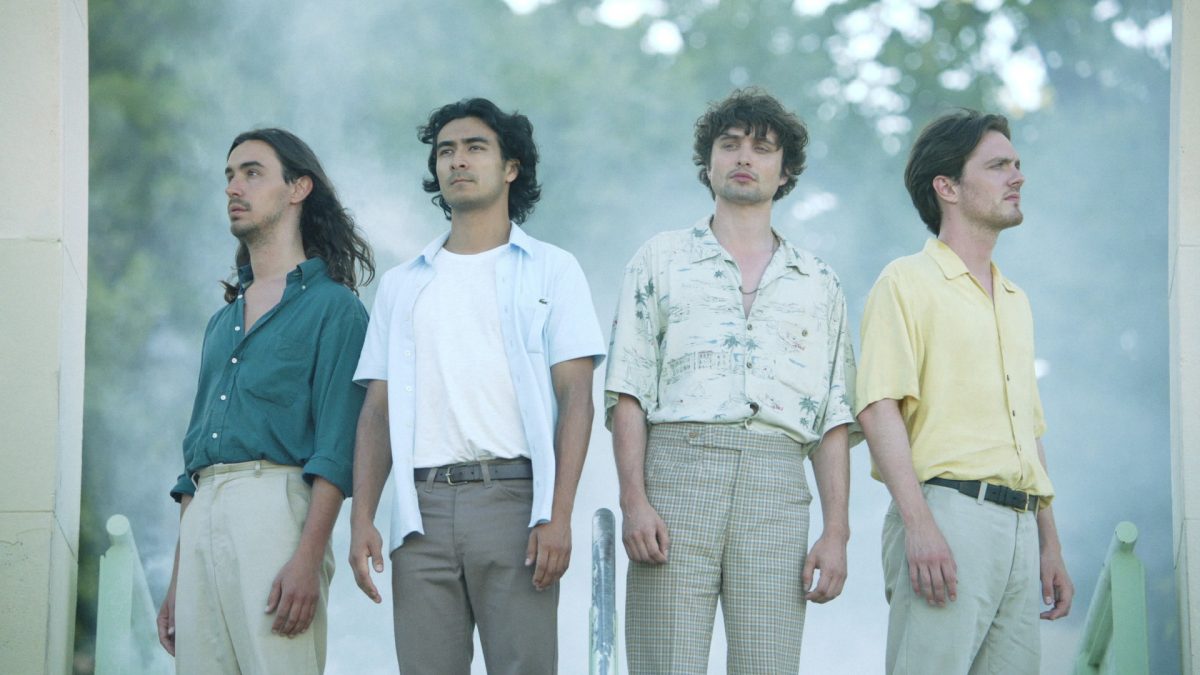 As the Getintothis crew find themselves carb loading as we head into the weekend and Deeper Cuts, Getintothis’ Matty Lear takes a quick glance at the horizon of new music as part of his festival prep.

Single of the Week:

With help The Staves’ trademark vocal layering, Flyte have created an equally beautiful and poignant piece of music in their new single White Roses.

Set at a funeral, the track tactfully navigates and delves into the transformative nature of love and loss. There is a definite inspiration in W.H. Auden’s Funeral Blues here, with lead singer Will Taylor penning: “Pack up the sun, and sweep away the stars”, echoing Auden’s “Pack up the moon… sweep up the wood.”

Done in perfect taste and with the utmost delicacy, it is a song about the point of breaking, but also about the beauty to be found within it. With such an aching sentiment attached to it, it is a testament to the glazed vocals and the soft instrumentation that such warmth can be taken away from a song so soaring with hurt.

Straight off the back of debut track I Don’t Care, released in May of this year, the Macclesfield five-piece return with Sexcess, another two-minute sonic spray of playful Northern indie poppy-punk.

It is an exuberant burst lyrically entailing the band’s obsession with issues of consumerism, sex and the quixotic notions that surround modern relationships. It is short and snappy; a shot of disdain towards a ‘Grimm’ global society.

He explains the change as “needing a comforting voice, so I decided to create one for myself with a song” and so, as a result, sings the vocals himself this time – as opposed to a session singer.

This inevitably gives the song a more personal touch. Perhaps this is why it sounds so fresh – that is, to carefully thread honest emotion into a future-facing electronic pop song that keeps true to itself instrumentally and lyrically.

Finders Keepers is taken from their debut album 0151, set for release on August 23rd. It follows on from the magic formula found on the highly acclaimed EP’s – 2017’s Get Away From The Feeling and 2018’s Bunkbed and confirms the band as one of Liverpool’s, if not England’s, hottest indie prospects.

It all comes in time for their UK headline tour in September and October this year, featuring the band’s largest hometown show to date at Olympia Liverpool, and a massive show at London’s Electric Ballroom.

A taste of their upcoming debut LP Hardship Starship, the second single to be taken from the album Extra-Terrestrial is a bright display of beguiling vocals and charming guitar riffs to match.

The plucky, perky intro weaves it’s way into a darker fuzzed-up bass-line, eventually sparring to the point where the chorus kicks it. Though the subject matter is star-gazed and intergalactic, the chorus is rooted and very much down-to-earth – it is raw, shouty and by extension, human.

Clocking in at a mere one minute and twenty five seconds, Primal Scream’s Velocity Girl managed to mark a milestone in the emerging ’80s indie scene and kindled a group that would become an essential part of British music culture.

Despite the track’s popularity, Primal Scream have never reissued Velocity Girl or included it on any retrospective albums. But now, the track is available on 7”, streaming and download along with a brand new track Broken. Not just one for the collectors.

Keeping with the prevalence of short, snappy tracks, avant-garde singer and producer Empara Mi manages to stamp her mark and make a major impact with Ditch all in less than two minutes.

Sampling Mozart’s iconic Requiem and lacing it with gallant hip-hop beats, she creates an anachronistic canvas for which to paint her dominant and impressive vocals upon.

This year has seen the emergence of Empara Mi’s dramatic, determined and expressive new musical direction, and this only adds to it – another piece of magnificently melodramatic post-pop.

Hailing from debut album first timer – to be released in October – Pizzagirl finds a juicy mix of The Vaccines  style instrumentation and vocals with Clairo-esque bedroom-pop production and a sprinkle of Ariel Pink.

It’s a fun fiction of supermarket romance, all of it bubbling, fizzing and popping simultaneously. Liam Brown, here, creates a universe all from the comforts of his bedroom – and it is a world to be drawn into; unashamedly glam, fast-paced and charming – this is a proper little earworm.

Born from numerous jam sessions in their home studio, the ideas formed in those early sessions have then only been re-arranged, produced, and mixed. From this, one can only hope that Dog is just a taster of what’s to come from this band. Groovy stuff.

As the band prepares to embark on an EU tour, Melbourne-based quintet 30/70 surely have released their most promising body of work to date. Keeping with the boom-bap dynamics, and the jazzy textures that have outlined their sound since their debut release back in 2015, the group makes the sax soar higher and tightens the bass even further.

Though it is not a major departure from their previous sounds, Tempted, providing a foretaste of upcoming album Fluid Motion, pushes and establishes their identity. It is sexy and frenzied, luscious and feverish, taut and free.

With the Emerald Isle currently basking in the indie-rock-limelight with acts such as Fontaines D.C. and Just Mustard leading the way, Dublin five-piece Silverbacks get in on the action. Produced by Girl Band‘s Daniel Fox, Silverbacks offer up a punchy new single, laced with deadpan humour and neat alternate guitar lines.

The steady cruising verses make their way towards a surprise of a sound: a chorus soaked in mordant post-punk sentiment. The whole thing together is an impressive mesh of the laidback with the punchy aggression of distinctive riffs and Irish remarks.