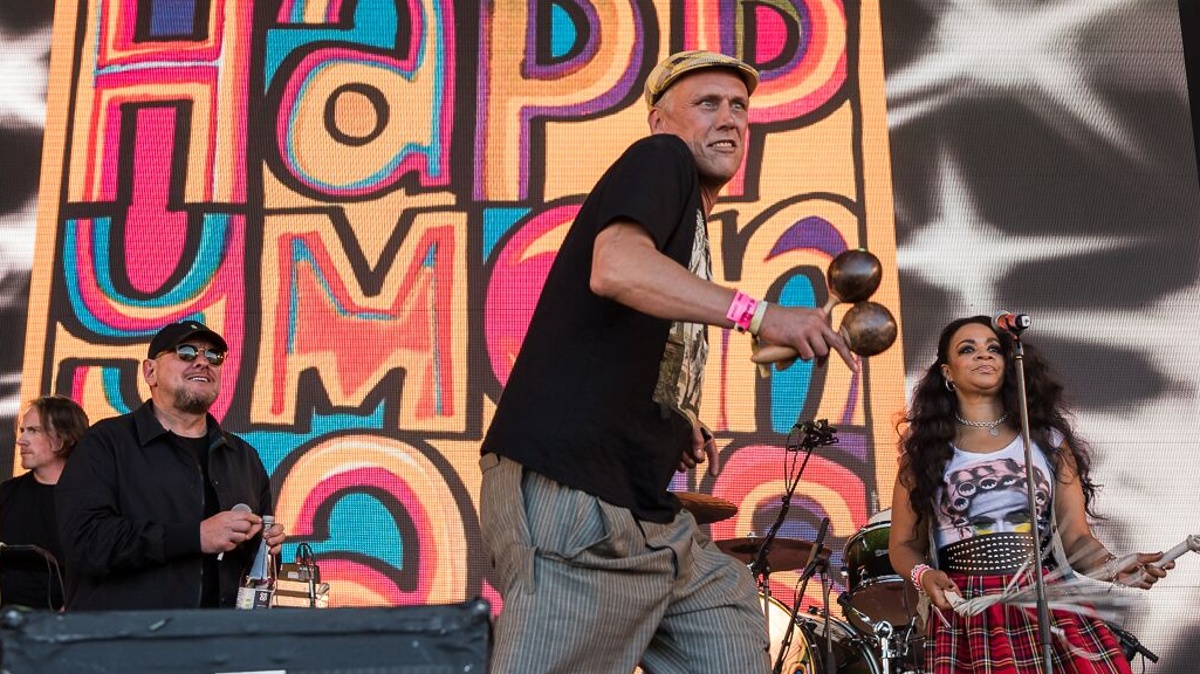 With Happy Mondays returning to Mountford Hall this Friday, Getintothis’ Del Pike has a teatime chat to the band’s legendary freaky dancer Bez and do some quality reminiscing.

Happy Mondays are back in town which means a night of freaky dancing at The Mountford Hall.

They may have been around for nearly 40 years but they still know how to turn a regular gig into a full-on rave and take those old enough back to Madchester with their trade in baggy indie and psychedelic poetry.

Hailed as genius by Tony Wilson, The Mondays were the band who could have saved Factory Records but just added to its demise, but what brilliant music they made along the way.

Band members have come and gone but the mainstay of the Mondays, Shaun Ryder and Bez are still, in the words of Bez, “like an old married couple”.

In fairness after much coming and going the original line up are back intact.

I managed a teatime chat with Bez to find out the current state of play in the band and he was on fine nostalgic form. He was more than happy to delve way back and started by telling me how his freaky dancing was more of a survival mechanism than an art form.

Bez is excited to be playing in Liverpool again and feels we always look after them but reveals “This is probably the last one, definitely the last tour for a couple of years at least anyway, We’re hangin’ up our fuckin’ dancin’ shoes for a while, gonna do a few festivals and one offs and that’ll be it really, so gonna be makin’ the most of this one”

We talk about how we’re not getting any younger and I ask if he’s getting tired now?  He laughs “Well, I try to ignore that bit of my life, this tour is like 30 dates or so and I still enjoy it, getting out and seeing people, its good”

Bez tells me he still has a flat in Manchester that he sometimes stays in and we start to reminisce about the city where it all began, he can’t believe the number of buildings that are coming down and being built, “In the suburbs though, there’s lots of fuckin’ neglection as always”.  I ask him how he feels about the Hacienda being demolished and rebuilt.

“It’s probably the best thing that ever happened to it you know, if it had stayed open it would have just died an ugly death”

Opposite the site of the legendary club is Tony Wilson Place, host to amongst other new developments, Manchester’s premiere Arts Centre, Home.

Named after Manchester’s hallowed impresario who whilst hosting Granada News through the 70s and 80s also managed The Hacienda and nurtured Joy Division, New Order, Durrutti Column and Happy Mondays.

Tony died tragically in 2007. I ask Bez how he feels Tony would have responded to this tribute.

“I think he’d be pleased with it yeah, he was a good old fashioned socialist, and he lived his life that way so it’s a really nice honour for him, he’ll be pleased with that then won’t he”

It’s a nice turn of phrase that suggests Tony is still with us somewhere. 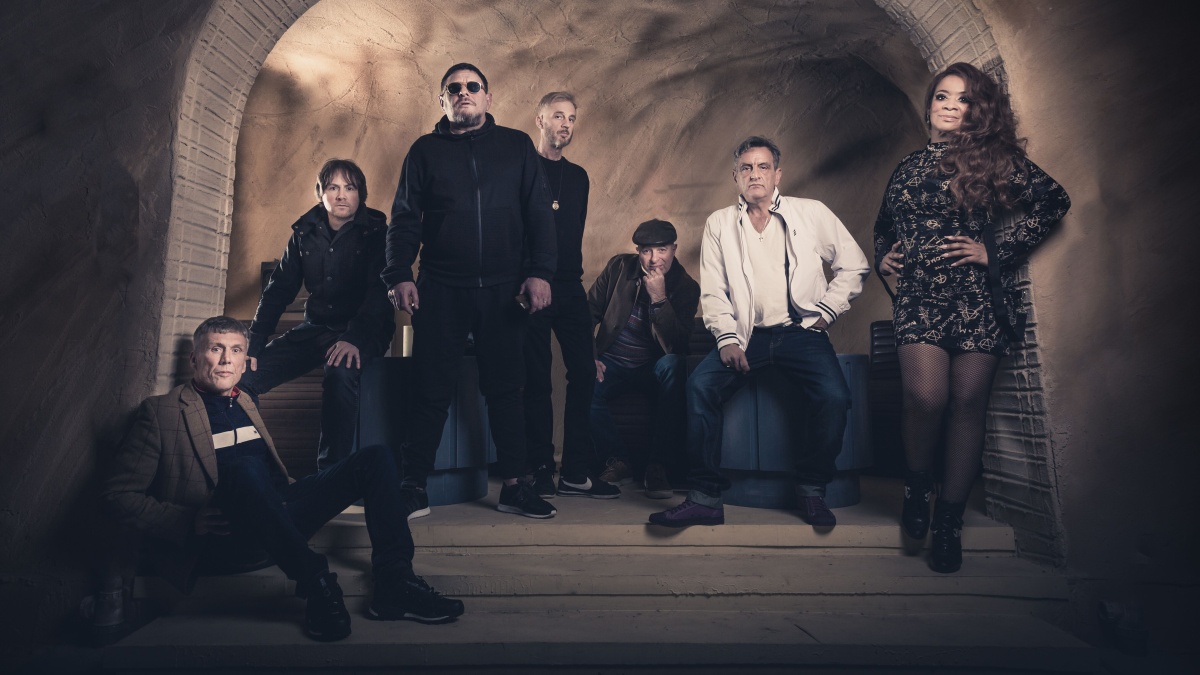 The Happy Mondays by Paul Husband

Bez contemplates the band’s relationship with him, “You know he was always really supportive of everything that we done, and it was him who suggested that I joined the band full time, and I did my first appearance at the Hacienda, he was just a good fella”

A night at a Mondays gig will always guarantee a roll call of their greatest hits, but the band hasn’t produced any new material since Uncle Dysfunktional in 2007.

Although released on The Sequel label it proudly displayed an iconic Factory catalogue number FAC 500, assigned by Tony Wilson himself who died just before the album’s release.

I ask Bez of the possibilities of any new material, “We sometimes talk about it but you know, never say never, but we’re at that stage now where it’s like Fuckin’ Bob Dylan, he comes out playing his new album and no cunt wants to hear it, so it could happen, you never know”

In fairness, he doesn’t sound convinced.

Bez is happy though that not all the audience are as old as the band “We get a lot of young people in the audience now, not just a load of grandads shaking their heads, we’ve got support from all areas”

I ask him if him and Shaun still hang out together and he starts laughing, “We’re like an old married couple really, yeah we still see a lot of each other”

Bez was always the more visual element of the band with his freaky dancing and maraca shaking, leaving the bulk of the music to the rest of the band, I ask him if he had any creative input in the studio, he quite adamantly states, “Yeah, I was always there in the music making you know”.

I ask him were there any Mondays tunes he has found difficult to dance to, “I get out when some of the slower ones come on, I’m not so keen on them, I use them to go and get a rest in” he chuckles.

The obvious question of what are your favourite Mondays tunes provides an unexpected answer, “A lot of the stuff off Yes Please” the album that was a legendary nightmare to make and is well documented as the album that killed off Factory Records almost immediately after its release.

New Order’s Peter Hook claimed it only sold a thousand copies on its initial run.

“I liked Cut ‘em loose Bruce off that album ‘cause it was like Shaun’s stepping stone to Black Grape you know”.

I ask him if he feels that album was underrated, and he feels that fans didn’t like the production, it wasn’t what they expected, “It went backwards in everyone’s eyes in production technique, but we were working with our heroes, The Talking Heads’ Chris Frantz and Tina Weymouth”

We chat a bit about Happy Mondays on film, particularly Michael Winterbottom’s 2002 Tony Wilson biopic 24 Hour Party People, and I ask how he feels about being portrayed onscreen before he’s even died;

“Do you know I’ve not even watched that film, I’ve got it on Blu Ray like but I’m just waiting for the day when it‘s all well and truly over to watch it, I’ve been avoiding watching it.  It was a film about Tony really.”

As if from nowhere Bez breaks some exciting news;

“Shaun’s having a film made this year about him, I can’t remember who’s playing all the parts but it’s a big-money production”

A little research reveals that the film, Twisting My Melon will star Skins and ‘71 star Jack O’Connell as Ryder and Maxine Peake as his mum.

“I’ve been giving advice for the lad who’s playing me, and he’s a scouser apparently” he laughs.

The gigs may be running thin but at least we’ve got a movie to look forward to.

II wish Bez good luck for Friday and I sense that he’s genuinely looking forward to it.