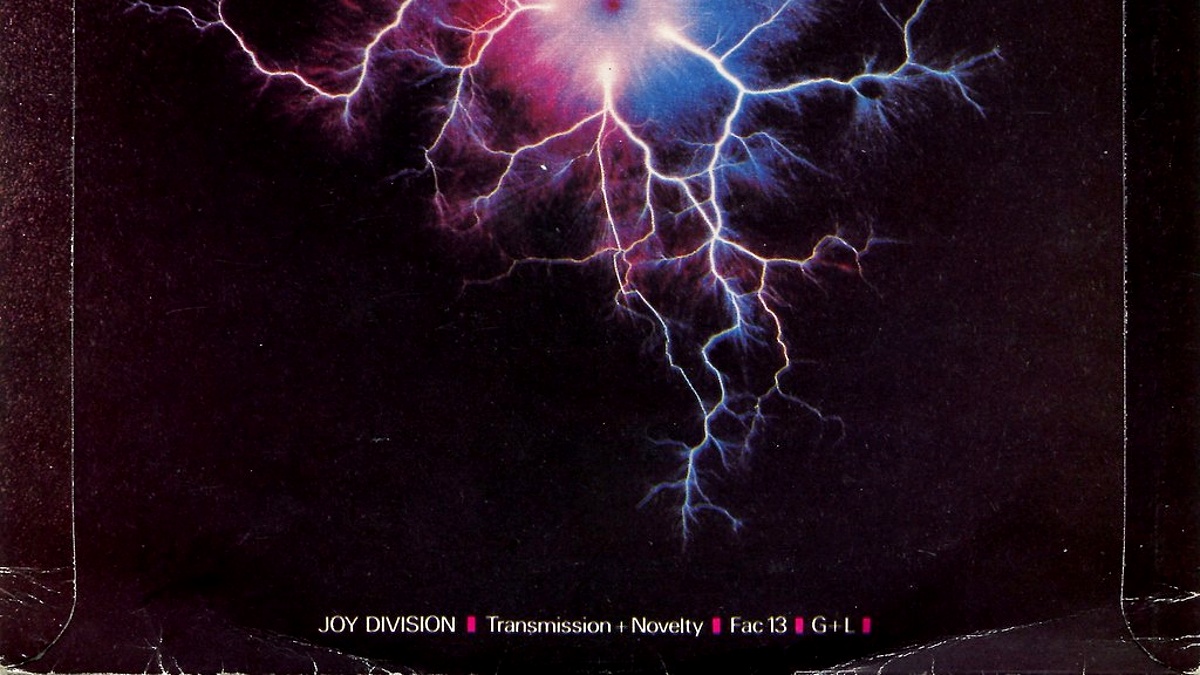 As Joy Divisions Transmission turns 40, Getintothis’ Jono Podmore has a look back at a what can arguably be considered one of the finest records to ever come out of Manchester.

Joy Division‘s first single Transmission was released in October 1979, 40 years ago this month.

It was released after their debut album Unknown Pleasures earlier in the year, and by then the band were becoming well established in the alternative scene, which in 1979 could mean significant sales, exposure and a busy touring schedule.

It’s a compelling piece of music that has lost nothing of its immediacy in the intervening 40 years.

Peter Hook is quoted as saying “We were doing a soundcheck at the Mayflower, in May, and we played ‘Transmission’: people had been moving around, and they all stopped to listen. I realised that was our first great song”  He’s right, it is a great song.

I remember watching Joy Division play Transmission on Granada TV‘s Something Else show in September ’79. Via the wit of their label boss Tony Wilson, who presented the show, the band were broadcast into millions of homes in the North West.

It was a watershed for me.

I was a teenager and already a musician so there was much that I recognised: Albrecht‘s cheap English Shergold guitar, Morris‘s Syndrums and Hook‘s Rickenbacker Bass.

Even my grey school uniform seemed in step with how the band dressed: shirt and slacks, dour greyness with zero American influence. I didn’t wear jeans again until well into my 30s.

Despite the monochrome dress sense, I watched it on colour telly.

1979 was not grey. It was orange, brown, purple, and vibrant shades of green. It was the intense red of glacé cherries in jars. It was the garish trim of Bay City tartan.

On Something Else, I was seeing for the first time a deliberate rejection of the gaudy paradigm that brought us the worst excesses of (for example) Roxy Music‘s pantomime.

But the true genius in the monochrome, brutalist, “schwarz/weiss” of Transmission is not the band’s dress sense or branding, but deep within the music itself. As my 14-year-old self watched, it dawned on me that they were only playing 2 notes,

This is why Transmission is so special: the melody and the harmony are pared down to the absolute bone. A 2-note bass riff is occasionally decorated but nails down the entire tension of the song between the root note (D) and the tone below it (C). This is reinforced in the guitar lines – sometimes an octave higher, or a fifth, or harmonised, but always just swinging back and forth between those 2 notes, that basic relationship.

The vocal melody again focuses on the same polarity but introduces into the bleak monochrome regime the hopeful warmth of the major third (F#). This tiny chink of light on the bleak horizon seems all the more heartrending in the dour context.

(If music theory is your bag, Transmission is in D Mixolydian. Joy Division‘s entire output is in either the Mixolydian or Dorian mode)

This is super basic stuff. It’s the sort of simple harmonic/melodic structure that could perhaps sustain the chorus or verse in conventional songwriting, but here, driven along by Morris‘s drums providing a motorik energy worthy of Klaus Dinger but with an extra, shivery Mancunian neurosis all of his own, this slender idea sustains itself without a moment’s doubt.

In Transmission, harmonic or musical complexity and the received wisdom of song-writing craft, are all completely overridden by something much more profound and valuable: emotional intensity.

This is what gives the tune its emblematic importance in popular culture. It proves a point about what’s actually important in art, a point that we all need to be regularly reminded of, that cleverness and complexity are utterly redundant if they are not imbued with meaning, with intensity, with human experience.

Transmission tells us that 2 notes with something to say have infinitely more value and meaning than a thousand well-rehearsed but empty artistic gestures. What the tune does have to say is more than the sum of its parts, and as time has proven is more than the band could ever have known.

The lyrics, vocal performance, guitar parts and production are all about a constant stepping up of intensity over an already frenetic rhythm section, Hook and Morris insistently jabbing away at every available beat. The initial 2-note guitar riff makes way for the first, almost crooned vocal line “Radio, live transmission”.

Like all great songs, this is already steeped in metaphor and in this case a bitter irony. Despite the efforts of Factory Records and Tony Wilson‘s position in the media, Transmission received virtually zero radio play.

The only national playlist it was on was John Peels’. Totally overlooked by mainstream radio meant initial sales and charting were low. It only got to number 4 in the UK indie charts, but in New Zealand where it did receive mainstream radio play, it reached number 2 in the national chart.

As the song progresses, Curtis sets the scene, “Listen to the silence, let it ring on, Eyes, dark grey lenses frightened of the sun”. He introduces us to a bleak underground world of “blind destruction”, of loneliness, isolation and stasis where all there is, all there needs to be to survive is the radio, to “Dance, dance, dance, dance, dance, to the radio”

This abandonment in the face of adversity is pure catharsis.

That Curtis was such a profoundly troubled young man is endlessly documented, but not a word of it conveys the traumatic tensions in his state of mind, tensions all men can identify with, more completely than the sound of this poor lad’s voice in this first chorus.

It may seem archaic forty years on, and perhaps even offensive, but Joy Division was a lad’s band. The sound, attitude and lyrics were all about exploring masculine experience. Macho, yes, but there is no bullying or swagger. This is about the desperation of squaring the circle of toxic masculinity with the morality of the father and the husband.

That “instinct that leads to betrayal” as Curtis put it on Heart and Soul, a track on the second album Closer that with hindsight reads as little more than a suicide note. Although I never saw them live (in my defence I saw New Order‘s first gig) all those who did, tell of an atmosphere of potential violence at Joy Division shows.

It may have been colourful, but Britain was a violent place in the late 70’s. Fists and boots would regularly fly and the catharsis of anthems like Transmission could let out emotions that were maybe perhaps best expressed more peacefully.

Miraculously, after the first chorus, there is another increase in voltage. As the chorus ends Curtis launches into another verse, this time higher and louder and more desperate than the first, maintaining the level of the chorus:

“Well I could call out when the going gets tough”

– and the going is getting tough. Everything is stripped away in this destructive, nihilistic dance:

“No language, just sound, that’s all we need know, to synchronize,
Love to the beat of the show”

There, he said it.

Love is what he needs, love is all we need.

An emotional admission, a tiny moment of weakness in the self-imposed incarceration of ladness.

But there’s yet more.

In a final chorus he gives himself up to the radio, to complete abandonment – and we can hear it in every crack and quiver in his desperate voice, each repetition reaching greater heights of intensity, relieving a greater burden.

After 4 repeats all that’s left is just a few instrumental bars as a coda, as the band decelerate and grind to a halt. It’s all been said, all been spent. We can replace our “dark grey lenses” and slink back into the underground and revel in our isolation.

That such intensity was captured and delivered seemingly directly to the listener is a testament to the brilliance of producer Martin Hannett.

Sometimes the producer’s job is to appear to disappear, to not be there, to allow the raw emotion to speak. But this is an illusion.

Every note and every moment would have been mulled over in the studio, every complex piece of equipment tweaked to be as transparent as possible, doing its job but leaving as few artefacts as possible.

From the audience’s point of view, Hannett‘s only contributions are the delicate drone that runs throughout the tune and a twinkly piano-like texture. This is early digital music technology, used to capture and loop tiny fragments of the music to create this harmonic backdrop to the entire song.

Like the horizon it’s there throughout the whole song, sometimes hidden but always adding a calm, cold, distant texture as the outpourings come and go. Despite inauspicious sales initially, Transmission has become an anthem, a totem of 20th-century British music.

It has been covered a number of times, but a singer taking on this vocal is on a hiding to nothing. As my generation ages, we will hear Transmission at countless funerals as the lads who tried so hard to work out the 20th century are laid to rest. A fitting epitaph for many of us.

Earlier this year I was commissioned to write a 30 min piece for the Crystal Palace Festival in London.

The brief was very open, the subject matter was simply “radio” to tie in with a performance of John Cage‘s piece Speech using radios to be performed on the same night.

40 years after first hearing the tune on Something Else, I elected to give Transmission a try, delving into the ideas in the original to extend it into something new. Applying years of accumulated production tricks to find the intensity in the music with purely electronic means was a wonderful technical exercise, but what to do with the voice?

I decided to approach the vocal using radio as a metaphor for internationalism and a basis for understanding. Four men reciting the lyrics in four different languages, modulating each other and cut up with a fifth language, Morse code, the original language of radio, mixing between each other as if they are stations on the radio dial.

The live performance on 23rd June came in at about 27 minutes.

A legitimate homage or sacrilege?

Have a listen and let me know.