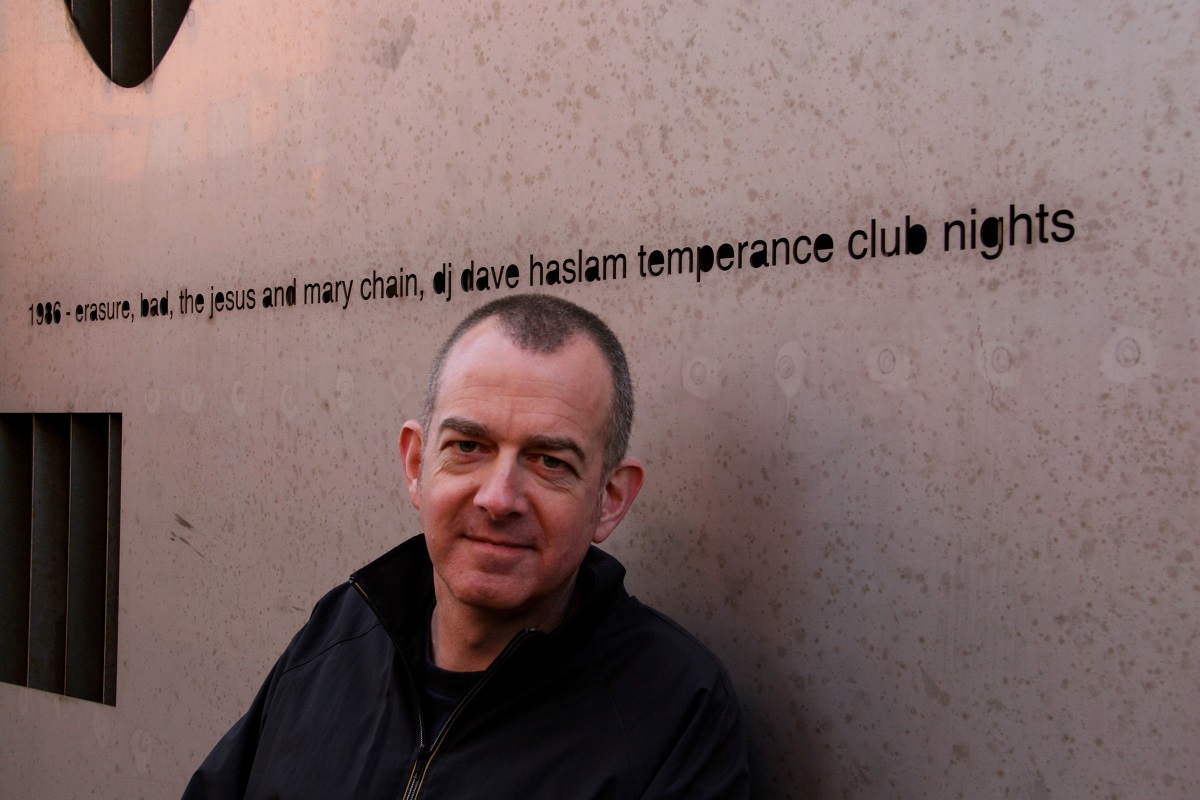 Hacienda DJ, writer and author Dave Haslam releases the third in his series of Art Decades books next month and Getintothis’ Paul Fitzgerald caught up with him to find out more about this intriguing tale.

She arrived with her best friend Robin and landed sometime at the beginning of 1982, they stayed for a few months, not the two years she claims.

At Julian Cope‘s suggestion, they shared a flat with Paul Simpson, whose band The Wild Swans were about to release the magnificent Revolutionary Spirit, as well as The Bunnymen‘s Pete De Freitas.

Love has spoken about losing her virginity in Liverpool, and there remains some debate over who that mystery person was, certainly, the man she claims it was doesn’t seem to remember it.

Or maybe he does.

“One of the greatest moments of my existence” was how she once described her time in the city.

Though it would be a stretch to say the early 80s Liverpool scene warmly embraced her, Cope still calls her ‘”The adolescent”, it certainly could be said the DIY independent spirit made a mark on her.

Hacienda DJ and author Dave Haslam has chosen this intriguing tale as the third release in his Art Decades series of mini-books, and will celebrate its launch in Liverpool with an evening at the BME.

The writing process seems to have been as much about memory, how we hold it and shape it over years, as it is about Mrs Cobain introducing Bill Drummond to LSD. 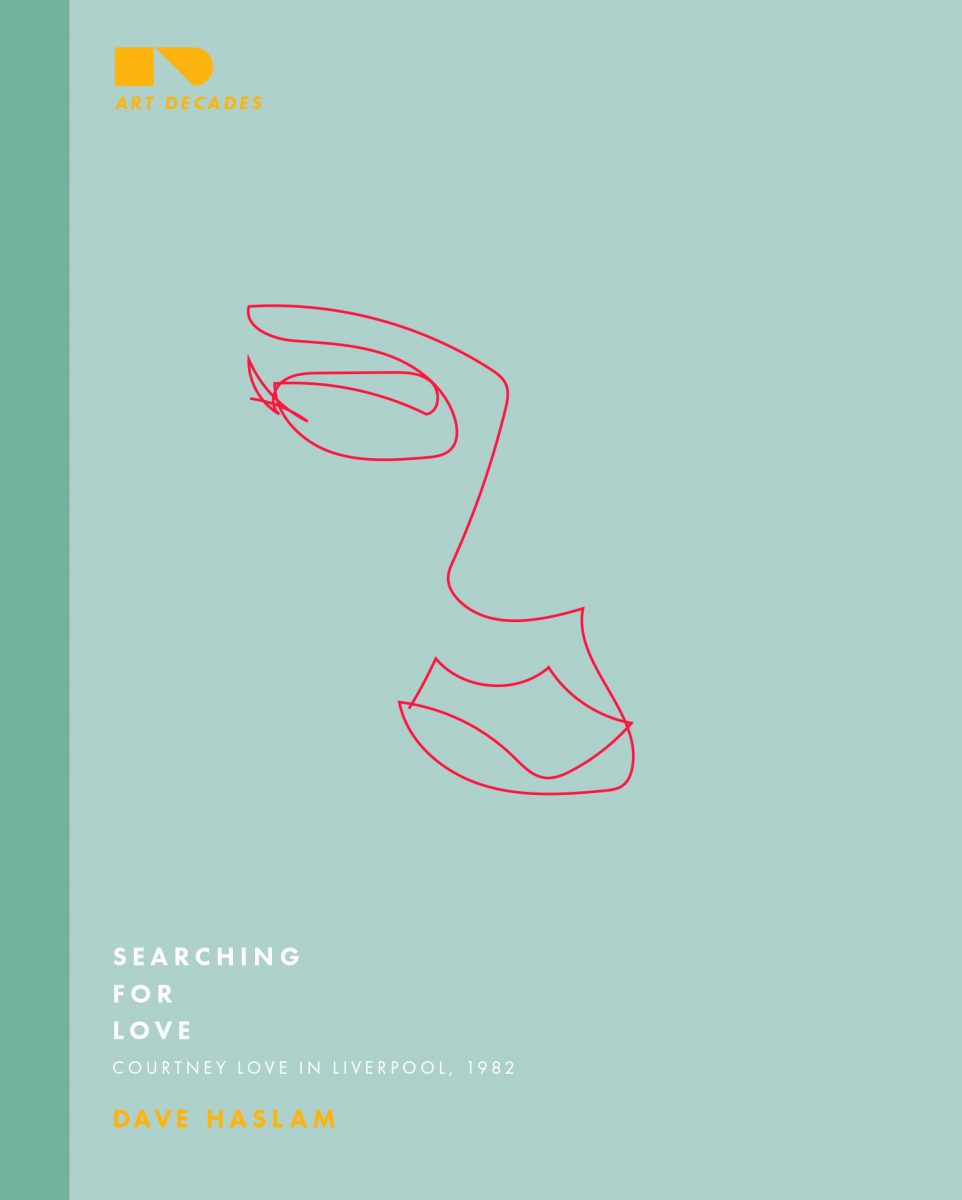 Searching For Love by Dave Haslam

You chose to follow up your Sonic Youth Slept On My Floor memoir (a favourite of ours) with Art Decades, a series of mini-books. What was behind that decision?

“I had so many ideas for more books that I couldn’t choose what to write about next. A full-length book is over two years of work for me. So I looked into the idea of doing shorter format books, two or three a year. That way I didn’t have to choose just one subject, I could choose them all. The format seems to work – they are 45-minute reads, and it’s flexible too. I didn’t know I wanted to write about Keith Haring, but the Liverpool Tate exhibition inspired me to, and I was able to get it researched and written and published before the exhibition had finished. Very satisfying!”

In terms of design, these mini-books are beautiful, tactile things. Simple, elegant and absolutely delightful. As enjoyable to look at and hold as they are to read. Who did you co-operate with on the design, and what was the brief?

“Well, I’m glad you like the aesthetic of them. I took the idea of these short-format books to Confingo, an indie publisher in Manchester, and explained they would be a series called ‘Art Decades’ and the hope would be people would collect the set, which will be eight books in all I think. Their inhouse design, Zoe, and I came up with the basic design idea and she has taken it on, and, like you say, they are beautiful things.”

This latest release, Searching For Love is a fascinating and largely untold story. Tell us more.

“Over the years I’d heard about Courtney Love living in Liverpool for a while in the early 1980s. I realised it was more-or-less when I first started going over to Liverpool from Manchester and going to gigs and meeting Wylie and Jayne Casey and seeing some of the first Pale Fountains gigs and so on. The idea of that world I remember and loved being inhabited by Courtney intrigued me so much.”

Women in the Music Industry VS the Madonna-Whore Dichotomy

What brought her to these shores, and to this city? It seems Liverpool in 1982 was a great place to run away to. The sort of scene she needed at that time.

“She was into music. She’d started reading NME at home in Portland, Oregon, she knew about the Teardrop Explodes and the Bunnymen. Her biological father was living in Ireland so she invited herself to stay with him – she’s 17 at the time – and actually she was a fan of U2, and their song I Will Follow. While in Dublin she met Julian Cope, it’s all in the book – I have eye-witness stuff from Bernie Connor who was on the Teardrops tour selling t-shirts. Bernie gave me some great stuff for the book.”

Paul Simpson, who Courtney moved in with, says that the people in this story didn’t realise they were part of scene until it was over. What was the scene she found in 1982 Liverpool?

“Yes, well Julian said Courtney and her friend Robin could stay in the bedroom he still had in the house Paul Simpson was living in. And Pete de Freitas was as well. So these two girls arrived, Julian hadn’t warned anyone, and chaos ensued. Paul’s band the Wild Swans were about to put out the single Revolutionary Spirit. He had enough on his plate! In 1982, on the other hand, the Teardrops were falling apart. There were so many bands though. I remember it very well; Bold Street thronged with NME cover stars!”

We imagine it would be a challenge to piece the story together. We all have different memories of our past, different interpretations of what happened. Did you encounter much of this?

“The whole thing about memory and how we in some ways create our memories – or at least forget some or adjust some to fit what we want our narrative to be – this began to interest me. In addition Courtney is big on self-mythologising – what rock star isn’t? I tell the story through the thoughts and memories of other people, though; not her. But all those other people have different takes on it.

And I found that although a lot of people she met in Liverpool found her loud and even obnoxious – and to be fair, I don’t think she’d necessarily disagree – in retrospect there’s a lot more warmth. The protagonists were all between 17 and early 20s. Now they’re in the late 50s; so there’s a retrospective view of what happened. The unhinged greatness of youth is actually something you miss when you get older.”

“She said it did. She’s said that the experience of being in the city was very important to her as a person, and also she says it showed her how to be a rock star. Cope, McCulloch, Wylie – they all consciously or unconsciously carried a star quality with them didn’t they, on Bold Street or sat in the Armadillo Tea Rooms?”

It could maybe be said that she’s defined by the mythology that surrounds her. Does Courtney know about the book? It’d be interesting to know her thoughts.

“She knows about the book. She didn’t demand to see it but I’ve told her a lot about it and we’ve exchanged a few emails. She has romanticised it all I think, and that’s quite endearing. She’s like “Oh, Dave, the Armadillo! I loved it there.”

She’s spoken about how she lost her virginity here in Liverpool and who to, but there seems to be some debate on that story. What’s the unofficial version?

“Ha, there is no official version! Various accounts are in the book. People took drugs, people slept with each other. Some people had less sex than they would have liked. I don’t think there’s a timeline or an incontrovertible truth.”

Julian Cope has little time for the one time queen of grunge, it seems. What happened there?

“Again, not sure. Courtney adored him; Robin talks to me in the book about this, about the Courtney and Cope thing. Ten years on from 1982, Julian was far meaner about Courtney than I think he needed to be, I think you can tell that from what I say in the book. But Julian falls out with lots of people, we know this. He doesn’t seem to care about coming across like a bit of a dick. That’s the rock star way isn’t it?”

She’s said that she was here for 2 years, but there seems to be some debate around that. What’s the truth?

“She arrived some time around the end of February 1982 and took the National Express coach down to Heathrow on the 21 July 1982.”

What made her leave Liverpool?

“Her visa had run out I think. Plus she’d just turned eighteen and she was armed with inspiration and ideas and had stuff to say and do. Rock & roll beckoned! Within a couple of years she was lead singer of Faith No More. They rated her, loved her. Then on to Hole. The rest of her life, unlike the Liverpool years, we know probably too much about!”

They say there’s a novel in all of us. Is there one in Dave Haslam?

“I’d love that, but who knows? I certainly love writing, just as much as DJing. I’m not sure I could make up anything as mental as Courtney Love introducing Bill Drummond to LSD. Real life is full of amazing stories.

‘Searching For Love: Courtney Love in Liverpool, 1982′ is available to buy at the Tate Liverpool bookshop, at the British Music Experience, and various outlets nationwide.”