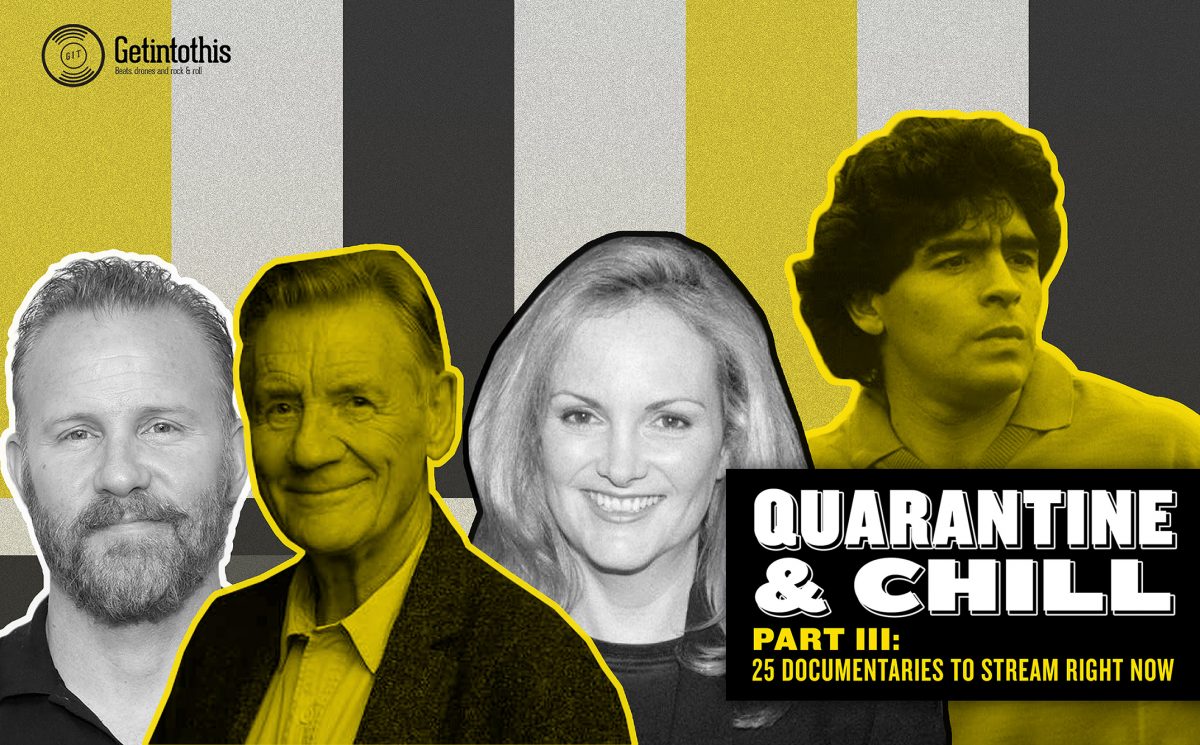 With the lockdown extended for another few weeks, Getintothis’ Banjo and Michael Maloney bring you their pick of documentaries for your education and entertainment.

Time no longer feels like a measurable concept, has it been two weeks, a month, five days, as everything blurs into each other, weekdays into weekends, spring into summer.

We’re now living through the new normal, where going outside feels like a privilege and you really begin to question if going down the local shop to buy a crate of lager and two family bags of chocolate really is ‘shopping for essentials’.

In this time, as we loiter in our homes looking for things to do, we realise how much we depend on the creative industries to keep us sane during this time.
From the broadcasters keeping us updated on the television and radio to the streaming services whose hulking back catalogues we’re all now deep diving into.
Not forgetting, of course, all the amazing musician performing live in their own homes which cumulated in the Together At Home concert where we saw the likes of Taylor Swift, Stevie Wonder and Christine and the Queens all performing live in the safety of their own homes.
And now social media platforms are doing what they’ve always promised to do for us; bringing us together and how it has from Tim Burgess’ listening parties on Twitter to our very own Getintothis Live streams on Facebook, this is probably the first time in many years social media has been viewed in a positive light.
And now it’s our turn to do our bit, to help keep you safe and sane, we’ve searched, scowered and rummaged to collect 25 documentaries to nourish, educate and entertain your brains.

Mindfulness, positivity and creativity during lockdown.

Jim Carey is best known for crazily mugging to the camera in some of cinema’s most over the top roles, but in Man On The Moon, he played comic savant Andy Kaufman with great sentiment and warmth.

In Jim & Andy: The Great Beyond, we see how this transformation came about, how Carey immersed himself in the role of Kaufman, a feat that is said to have blurred the lines between the two separate personas.

Man on Wire: Amazon Prime
The story of French tight-rope walker and all-round lunatic Phillipe Petit’s hare-brained scheme to walk a high wire between the twin towers of the newly built World Trade Centre, back in 1974.
Part biographical documentary, part heist movie, this jaw-dropping story will keep you on the edge of your seat. – Rachel Bywater
Free Solo: Disney+
Free solo looks at climber Alex Honnold as he attempts to become the first person to climb the 3,000 feet high El Capitan, free solo – which means without rope or safety equipment.
In doing so, he demonstrates what a human being can do with the right amount of training, determination and physical ability, but also provides valuable life lessons on setting and reaching goals.
American Factory: Netflix
The first documentary produced by the Obamas follows a former General Motors factory in Moraine, Ohio that is taken over by a  firm, Fuyao. It leads to a culture clash as the new Chinese employers bring in their own staff from China and try to enforce their working culture on the American employees who in return try to unionise.
But beyond the workplace politics, the employees from China and America begin to re-evaluate their preconceptions and realise that they’re not so different from each other and at the end of the day they’re both striving for the same things.
Diego Maradona: 4OD
After making documentaries about Amy Winehouse and Whitney Houston, director Asif Kapadia turns his lens on to one of the greatest footballers of all time.
Focusing on his time in Itay playing for SCC Napoli, we see Maradona become transformed into a demi-god in the eyes of the Neapolitans as he leads the to unparalleled glory.
The never before seen archive footage gives us an insight into the claustrophobic nature of that level of fame as Maradona is mobbed wherever he goes and it also goes to some way to explaining why his downfall happened so quickly and steeply.
White Boy: Netflix
A story so outlandish that it was also turned into a feature film starring Matthew McConaughey. White Boy follows Rick Wershe Jnr, a seventeen-year-old from Detroit who was an FBI informant and drug dealer.
After being cast aside by the FBI, Wershe was then caught and sentenced to life in prison for drug dealing. Using interviews from both sides of the law and the journalists who reported on the case at the time a story other than the official one starts to unravel.
Super-size Me 2: Holy Chicken: Amazon Prime
In the original Super Size Me, Morgan Spurlock ate only McDonalds meals three times a day for a month, gaining a 13% increase in body mass and turning his liver, in the words of his doctor, “into pate”.
In the sequel, made 13 years later, he turns his attention to chicken. He does this by starting his own chicken fast food outlet and shines a light on the truth, lies and practices that bring the food to our tables.

Blackfish: Netflix
Blackfish is the ‘Making a Murderer’ of sea mammals. This fascinating 2013 documentary from American director Gabriela Cowperthwaite documents the story of Tillicum, an orca held at Seaworld in Florida who has been involved in several tragic ‘accidents’ involving his trainers.
You’ll never watch Free Willy in the same way again. – Rachel Bywater
Three Identical Strangers: Netflix / 4OD
This documentary has an intriguing premise where it looks at the lives of three identical triplets who were each adopted by different families when they were six months old, with none of them knowing that they had brothers.
Incredibly, this situation came about as a nature vs nurture experiment that seemed to disregard the emotional human impact that finding out the truth would involve.
HyperNormalisation: BBC iPlayer
Adam Curtis‘ documentaries are known for being deep philosophical and political pieces and with a title like HyperNormalisation what else would you expect?
HyperNormalisation is an unyielding beast of a documentary that tries to explain how corporations and politicians create false narratives to present an image of the world that is actually untrue to what we see happening around us and how over time we’ve come to expect it as truth.
It’s a timely reminder that we shouldn’t believe everything we see and hear especially now when we’re surrounded by so much fake news.
Grizzly Man: Amazon Prime
Grizzly Man is the story of Timothy Treadwell, a failed actor turned self-proclaimed Grizzly bear expert.
Directed and narrated by legendary German director Werner Herzog, and largely created from Treadwell’s own footage, this bizarre and ultimately tragic tale will keep you hooked until the end. – Rachel Bywater
Hail Satan?: Netflix
Hail Satan takes and unflinching look at The Satanic Temple, the centre of one of America’s most controversial new religions. But what does this actually mean, what does it involve and is the soul of America really in need of a Satanic revolution?
Hail satan is really a look at religious intolerance and the search for equality.
Life, Animated: Netflix
This heart-warming documentary received a host of award nominations upon its release. Life, Animated looks at the power of film and especially cartoons as a young boy with autism and his family discover a way to communicate with each other through Disney films. Keep the tissues close by.