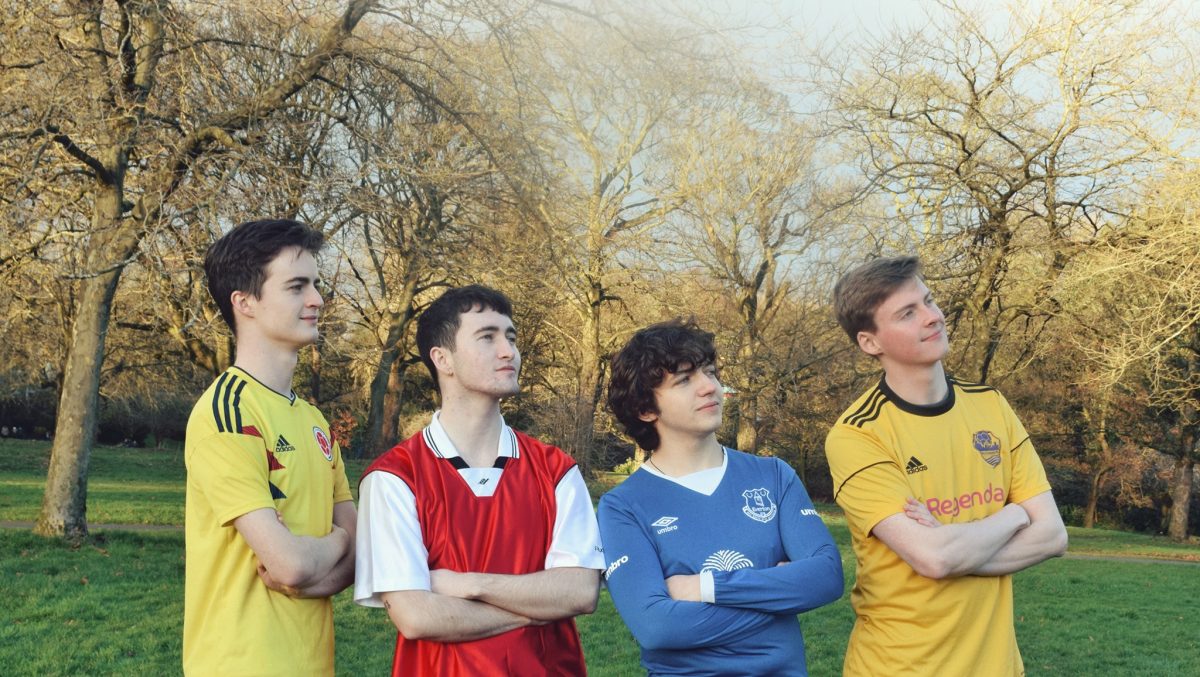 Week nine of lockdown and what is there to say that hasn’t already been said?

Many of us are preparing to head back to work for the first time in months.

Many students are handing in their dissertations as their years of hard work are firmly punctuated by Zoom lectures and Turnitin.

Most of us are still feeling at a little bit of a loss.

The lack of clarity from our leadership along the way has not quelled many fears, either.

Though if you were in fear there would be any slowing down of new releases to check out, fear not!

There is plenty to sink your teeth into this week.

We’ve got everything from punk-infused Britpop to disco-funk and avant-pop:

The “best song they’ve released so far” (the band’s own words).

It is clear Courting is on to something with this.

The song only fleetingly mentions the Talking Heads’ frontman, though it namechecks everybody’s favourite TV game show The Chase while poking fun at the football culture embedded into Merseyside’s DNA and the casual racism that runs rampant across the UK.

Punk and Britpop inflections shine throughout, especially underneath the saxophone solo that comes little over two minutes into the track. It’s a beautifully chaotic, tongue-in-cheek look at modern British culture – the good, the bad and the ugly of it.

If you’ve got the time, check them out – you won’t be disappointed.

A real “get up and dance” track, the latest from Bristol’s James Humphrys is the perfect summer track in an imperfect summer.

Shiny synths and guitars, a trumpet solo and slick production alongside lyrics that aren’t just memorable but also meaningful, Humphrys captures the feel of the Great British summer so delightfully.

It’s totally infectious from start to finish and a dreamy, bright indie-pop classic in the making.

Try to get through this song without cracking a smile, I dare you.

Chelsea Wolfe and Jess Gowrie’s new project draws on their collective experience in rock and metal and the result is something dark and beautiful.

Wolfe’s echoey vocals over the fuzzy guitars and heavy drums demand to be played at full volume. It’s angry and visceral, impossible to ignore – not that you want to anyway. And at only two minutes in length, Downers Surrounded By Uppers really packs a punch and leaves you wanting more.

This track and recently-released Knelt have real Sonic Youth vibes to them – that is only a good thing.

JONES – Giving It Up

Another track that just oozes summer, the soulful sound of JONES’ voice tells a tale of falling in love over shimmery guitars and synths layered with delicate R&B beats.

The track is part-confessional and part-sultry summer bop and the result seems almost effortless. It’s a low-key, feel-good anthem that’s as great for getting up and dancing as it is for chilling out to and one that deserves a place on any summer playlist worth its salt.

Hannah Grace – How True Is Your Love

With ad-libs that showcase her incredible vocal range while singing about a love that isn’t treating her properly, Hannah Grace’s lyrics will definitely resonate with anybody who has ever been made to question a relationship going sour.

Starting soft and quiet and building into something much bigger, the funk-infused layers underneath Hannah’s honey-sweet voice make How True Is Your Love an undeniably catchy new track that’s full of drama and yearning in equal parts.

Driven by punk-inspired guitar riffs and a memorable, chant-along chorus, Amber’s Knees takes its inspiration from reality TV and culturally dissociating from the real world – something we all have a tendency to do, in some capacity.

Teamed with it’s brilliant and bizarre CGI-heavy music video that leans heavily into the track’s themes, the whole experience feels like a fever dream.

With their debut LP due in August, there’s a lot to get excited about with Girl Friday – this is just the start.

There’s something dark and sinister about LA-based Madge’s new single H8R, in all the best ways.

Mid-2000s emo guitar riffs teamed with avant-pop production and vocal distortion give the song an almost creepy edge while their lyrics brim with misanthropy. Any woman who has ever had a boyfriend who often felt more like a child will relate.

Madge said the track “felt like a twisted nursery rhyme” and that’s exactly how it sounds.

Leeds disco-funk trio Galaxians make a song and dance about female empowerment with this new track, and it’s pop perfection.

Live drums paired with electro-pop melodies and Emma Mason’s powerful vocals make for a delightful feast for the ears.

Full of the get-up-and-go some of us might need, Heartbreaker is a truly liberating track, lyrically and sonically. It’s impossible to feel bad with this blasting behind you.

Following on from their February debut, Panic Shack put their elastic punk sound to solving an age-old problem for any woman that’s ever been to a bar: men coming over trying to make a move and not taking the hint.

Inspired by real-life events during their first night out together, it feels cathartic – “I’ll Jiu-Jitsyou, bitch” sounding like something to shout in the face of someone making unwanted advances.

Angry guitars and drums underneath Sarah Harvey threatening her unwanted suitor gives the song a chaotic edge that you can tell is going to sound amazing live, once we’re all allowed to go to gigs again.

Spice – All My Best Shit

All My Best Shit is a raw listen. The titular line on loop like anxious thoughts whirring around ones head too fast, it puts a magnifying glass on how people deal with pain and loss, and how it can bring out the worst in us sometimes.

The introspective lyrics and the guitar-heavy indie-pop sounds like a throwback to late 2000s/early 2010s emo, in a way that makes you want to scream it out loud and cry along at the same time. The subtle violin that plays underneath is a nice touch that really brings these themes out.

The music video is dedicated to their friend RJ Phillips, who passed in the spring. This song is a beautiful way to honour him.

Taken from his upcoming live album, the orchestral additions to this new version of Artifice are truly beautiful and give the song a whole new lease of life.

The original version of Artifice is great already, but this new version sounds more complete and whole while allowing the lyrics to resonate on a deeper level.

Noise-rock and alt-pop at its best, Gaygirl‘s track sounds exactly like what it describes – like you’re about to be pushed off the edge.

The up-and-down lyrics over grunge guitars give it an unhinged feel, made to match the chaotic energy of the band’s live shows. Experimentation with vocal and guitar effects really pays off.

Full of twists and turns in just under three minutes, Killing It is equal parts fun and ferocious and prove Gaygirl are a band to get excited about.

MIke Polizze  – Revelation
The latest release from Mike Polizze‘s upcoming album, Revelation is light and breezy and another track deserving a spot on your summer playlist.
Featuring backing vocals from Kurt Vile, the song is mellow and nostalgic.
Another Singles Club addition featuring a trumpet solo, Revelations is a largely acoustic number full of precise, saccharine melodies that elicit thoughts of hazy midsummer sunsets.
With Polizze relying on added effects as little as possible, his natural talent for catchy hooks shine on its own merit and the result is stunning.