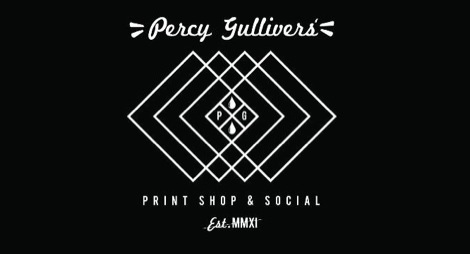 Getintothis has championed Horse (Gary to his mam) for sometime – he was our Local Hero way back in 2010.
His passion for music goes hand in hand with his artwork – and anyone that’s followed his exploits knows what exquisite taste he has in both departments.
Screen printing the cream of Liverpool’s finest gigs blossomed into a touring showcase known as Screenadelica which combined his own posters with artists from across Europe and the US while McGarvey also collaborated with Liverpool Sound City hosting a variety of incredible gigs (see reviews below).
So, it was of little surprise that he concocted a plan to bring a pop up shop to Liverpool in Christmas 2011.
This endeavour, known as Percy Gullivers’ Print Shop and Social sprung up out of nowhere – a wee shop at the top of Bold Street flogging quality prints, independent records, home-made jewellery and vintage memorabilia. It was swell.
This Saturday, Percy Gullivers opens for good, and in fitting style, McGarvey is throwing a grand – and characteristically noisy – opening party at the Shipping Forecast.
Downstairs in The Hold are Leeds’ specialists in riff devastation Hawk Eyes alongside atmospheric riff warlocks Humanfly, Getintothis‘ favourite multi-drumming fusion maniacs Jazzhands and gnarly types Avenging Force also attempt to blow your ears out.

Upstairs, in what will become the new permanent home of Percy Gullivers‘, there’s a set from Serious Sam Barrett, while Bido Lito, Abandon Silence, Outfit, AK47 24/7 and James Binary take to the decks – presumably not at the same time. Horsome!
ANYWAYS, here’s Gary’s artwork which tells the story better than all the above. Get involved. 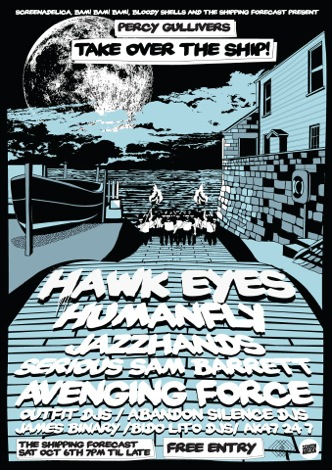