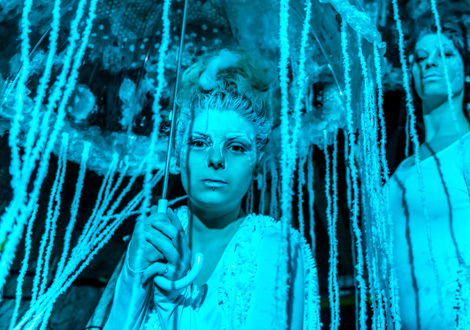 Williamson Tunnels provide the spectacular setting for Aquaria – a voyage to the depths of a deep blue planet, Getintothis’ Laurie Cheeseman revels in his psychedelic underwater trip.

Liverpool is a city with plenty of outré spaces for live events; Sefton Park Palm House, people’s front rooms, a pizza joint, a whopping Cathedral, a place named the Kazimier. One, however, comes close to topping them all.
Built under the direction of a chap who can only be described as eccentric, the Williamson Tunnels reserves its space for hosting events to a mere handful each year – all come complete with an thrillingly bizarre twist – and for the first one of 2014, promoters everisland delivered something from the eerie depths of the ocean; their first in a series of special events.
Performance artists and dancers dressed up as Amphitrite-goes-psychonaut prowl the caverns and the depths of Poseidon’s lair; luring Getintothis, siren-like, with their glowing hula-hoops, laying the foundation for an evening which blends the exotic with something straight out of a James Cameron cinematic treat. Jellyfish tour guides line the route, navigating around the ghostly stalactites before emerging into the main room to the tender strains provided by new brass-fused kids on the block, Glossom. 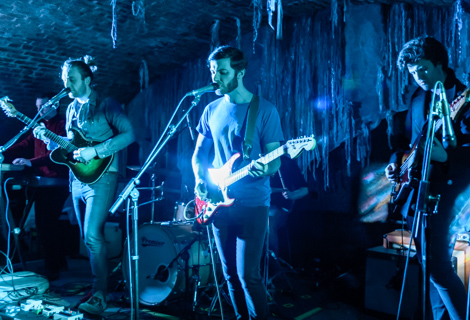 VEYU live at Aquaria in Williamson Tunnels, Liverpool
Easing the audience in for something more inventive than your average evening on the tiles, GIT Award 2014 nominees, VEYU and Magic Arm keep the ball rolling. VEYU, a band whose whole getup is full of delectable contradictions; their ambience-filled post-punk billows from the stage, keeping the gently swaying audience enthralled.
The people walking around with jelly-comb umbrellas and the dancers add a subtly psychedelic edge. Magic Arm follow armed literally with effervescent folk taking the vibe even further, circling between turquoise heights and deep lapis lazuli depths; the highs and lows providing some dynamism to an otherwise chilled evening.
Having only been together a matter of months, they’ve accrued an exceptional amount of love from the city. And tonight proves why – as tight as a team of synchronised swimmers and as fluid as the night’s namesake, their brand of funk-laced post-rock aligns beautifully to the night’s aquatic theme.
Southern, tonight’s headliners, have a characteristically careering set that propels the night along, bringing just the right amount of fuzz, offset by hauntingly gorgeous melodies, to the proceedings. 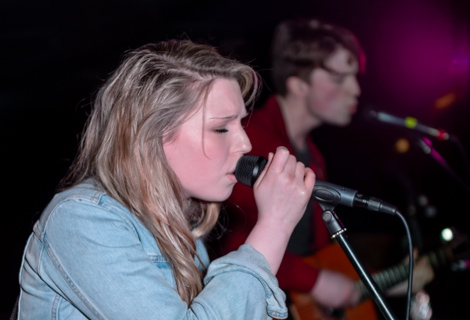 Southern live at Aquaria in Williamson Tunnels, Liverpool
Where Glossom are interlocked and jangly, Southern are twisted, twangy folk; where VEYU are sweetly kraut, Southern purvey desert-fried repetition. The songs are deceptively simple on the surface, but once you climb into their textures and melodies it becomes clear you have to be exceedingly clever to put something this dumb together. Go get lost in the melodies.
Rounding off the evening on a completely different vibe are Broken Men – with a full 10 man line-up plus Natalie McCool, almost casually assisting on vocals, proving there’s an added dynamism to their durrrty rock’n’roll. As the night tips towards 1am, Harlequin Dynamite Marching Band bring proceedings to a close as we submerge into a deep stupor that seems suitably apt. Wrecked, indeed.
Pictures by Getintothis’ Simon Lewis.
Further reading on Getintothis:
VEYU named in GIT Award 2014 shortlist.
Southern live at FestEVOL 2013.
Glossom, Natalie McCool and Broken Men named in Getintothis‘ Ones To Watch 2014.
Parquet Courts set for Liverpool summer outing at Kazimier.
Brian Jonestown Massacre to decamp in East Village Arts Club.
Andrew WK to party hard in Liverpool’s East Village Arts Club.