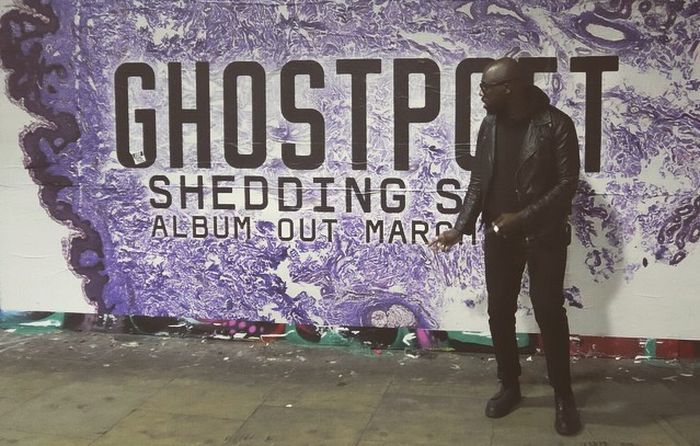 Ghostpoet’s new album Shedding Skin is out in March

With an imminent new album set to usher in a new artistic direction, Getintothis’ Paul Higham brings news of the return of Ghostpoet – and an April gig at The Kazimier.

It would seem that Liverpool gig announcements are a bit like London buses. You wait ages for one to come along and then, before you know it, three arrive almost at once.

Following on from the scoop that Foxygen will be at The Kazimier in May and the April return to Leaf of Matthew E White, comes the equally exciting news that Ghostpoet will make a much awaited Liverpool return at The Kazimier on 3 April 2015. This tour will follow hot on the heels of two sold out London dates and one in Manchester at the end of this month – he’s clearly in demand so don’t hang back.

His latest tour is in support of his new album, Shedding Skin, which is set to be released on 2 March 2015. The album sees Ghostpoet set to head off in a slightly different direction.

In a departure from his previous recording, the album was recorded in a live environment alongside his touring band. The outcome is a warm and more natural sounding album. Where previous LP Some Say I So I Say Light felt like a cathartic antidote to personal grief, Shedding Skin is a looser, baggage-free and more outward looking album.

Like any departure, it’s a brave step but also one that is to be encouraged. It is so refreshing to see an artist progress, try new ideas and stride confidently into the unknown rather than stand still and reproduce what has been done before.

That said, if the new material does hark back to his Mercury Prize nominated debut album, Peanut Butter Blues & Melancholy Jam in its freeform spirit, it differs markedly in its collaborative bent. Referring to working alongside his touring band as well as guest vocalist Lucy Rose, Etta Bond and Maximo Park‘s Paul Smith, Ghostpoet commented “I wanted my mates“.

On a serious note, the collaborative process imposed a structure and and a framework to the recording and in many ways this lends the eventual LP a deliberate sense of coherence and consistency of direction. Speaking of the process Ghostpoet noted that, “Brian Eno told me, when I was in Mali participating in African Express, that it was always best to record an album quickly and move on. That philosophy really stuck with me, and I brought it to the fore when making this album“.

We’re eagerly anticipating the release of the new record – it should be a cracker. To whet your appetite, take a listen to the new track, Off Peak Dreams which highlights his new direction. Based on this, The Kazimier show should be a corker.