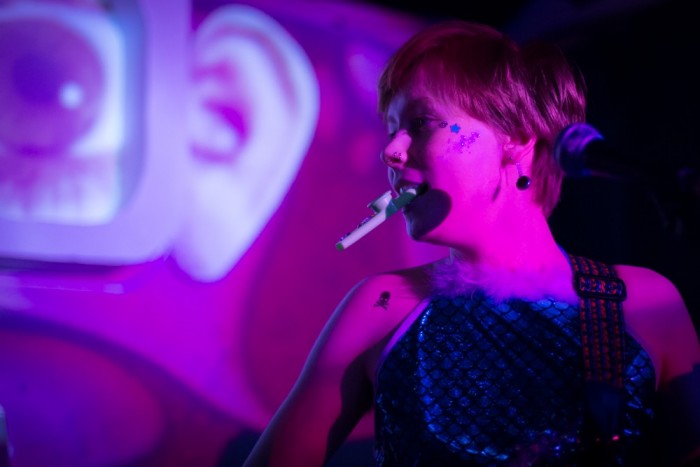 It might have only been a gig in what was a former pub, now a creative space by the docks, but as we wandered back into what had probably been the lounge (or the snug; it was hard to tell) of The Bull, there was something different going on.

It sounded as if Godspeed You! Black Emperor or one of their varied offshoots had turned up and were filling the space with the sound of at least a hundred massed guitars. Sexdream were billed as “kaledoscopic shoegaze for freaks and wierdos” but that seemed a bit of an obvious tag to hang around their (or rather his) neck. Sexdream, being a solo guitarist, amazingly managed to wring out of a simple electric guitar something that was akin to a storm of epic proportions.

Or closer to the calm after a storm, ripples and waves of noise fading away into the ether; notes, scales and arpeggios tumbling into each other, colliding like random driftwood washed up on an empty and desolate shoreline. There were faint touches of My Bloody Valentine-style waves of sound at times, but that’s as close to shoegaze that it became and thankfully there was only a slight hint of it, certainly not enough to overpower the overall effect.

The best place to find out about new music: Getintothis‘ Introducing section

The event had been promoted by Bitchism as The Pink Punk Party and by the time we got through to Sexdream – who’d followed Jazamin Sinclair and Perkie – there had been plenty of pink stuff but not much old-school punk, which was a bit of a relief to be honest. A Saturday evening spent watching 2016’s equivalents of The Exploited or the UK Subs hadn’t exactly filled us with unalloyed anticipation. Punk may not be dead, but there is no point in hearing rehashed music from 40 years ago. It is 2016, after all.

Nevertheless, there was the spirit of punk to follow Sexdream with the arrival on stage of Queen Zee and the Sasstones. Three songs, ten minutes or so. Maybe less than ten minutes. They opened their set by thrashing (literally) through The Beastie Boys You’ve Got to Fight for Your Right to Party.

Interestingly, Queen Zee and The Sasstones also include Sexdream in their troupe, a quite radical change of artistic direction for the young lad, but one that shows he can turn his hand to more than one form of popular music. This was a common and very welcome theme for the whole evening, the cross-pollination of the acts.

Drums and guitars were willingly shared between the acts, they helped each other set up and a fair proportion of the hundred or so of us who were gathered there watching, dancing and enjoying the whole thing were members from each of the bands. There may not have been all the echoes of 1977, no one was gobbing and there wasn’t a clichéd safety pin to be seen, but as for a spirit of cooperation and breaking down the fourth wall, the evening was true to the vision of punk (even if that never really existed at the time).

Queen Zee and The Sasstones ended their three-song set, shirtless and ransacked their (pink punk) way through a ramshackle version of The Prodigy’s Firestarter, concluding in a Flying V guitar having the shit kicked out of it. As they wandered off the stage and through the audience, someone shouted “is that it?” and “come back and finish the job”, no doubt a reference to the near destruction of the said guitar. Queen Zee and The Sasstones were a laugh and certainly made up a lack of finesse with an overdose of enthusiasm.

Worth keeping an eye out for if they you ever get the chance to see them.

As were the next act, Ill, who hailed all the way from Manchester. Ill, as in poorly as opposed to the new BBC3 logo, are a four-piece female band, with distinct post-punk tendencies, reminiscent of the late-lamented Kleenex and with a distinctly spiky tone. Of all the bands that played that night, in an odd and quite unintended way, they possibly were the most punk like of the lot.

Being shouty and very angry about something, their short songs, combined with loud guitars, seemed quite Crass-like and, if you want punk, then that surely is a good thing. However, with song titles like Stuck in a Loop and especially Bus Shelter, their Fall-like Mancunian roots were showing through. There was something different about them. Some sort of energy and passion that sometimes is lacking from the music scene. Very good. We tapped our toes throughout their set and nodded approvingly at the end. Ill. Remember that name.

Second to last of the evening’s fare were Think Pretty, a two-piece guitar and drum combo from Cardiff. Such a format may seem an easy way to do things, stripped down and back to basics etc. Maybe such things are deceptively simple and, in an anti-Zen sort of way, less is not always more. The White Stripes possibly have a lot to answer for.

Think Pretty have a basic formula which they resolutely stuck to with grim determination. Whack the drums as hard as you can, shout a lot and thrash the guitar in a quaint-heavy metal way. It worked for two or three songs but we longed for a bit of shade and light and a bit more depth which possibly the addition of a bass guitar may have provided. It was frustrating because, like all of the acts on that night, they interacted so well with the audience and seemed like genuine music fans as well. It was a case of close, but not close enough for us.

Pink was the theme of the night and Pink Kink rounded things off in an exemplary fashion. We’ve raved about them before on Getintothis and they really showed that they deserve such acclaim.

Boppy, poppy, shouty, fun, exciting; this is exactly why we should all be into new music. No point in harking back to the past when there are bands of this calibre out there right now in 2016. Any band that can switch from what sounds initially akin to Savages-like grimness to incorporate the use of a kazoo and generate massed shout-alongs in the space of a few bars of their second song in their set surely has to have something about them. And a band that can jump in unison obviously has no problem in keeping time.

Without slipping too much into hyperbole, being able to meld folk and rap in one song shows not only musical dexterity but an intelligence and level of innovation that is to be welcomed. Imagine Joanna Newsom suddenly letting it all rip, unlikely and impossible as that may seem, then you’re getting close to what we witnessed with Pink Kink.

They ended their (much too) short set in a mass-psyche out, guitars held aloft to the rafters and squalling happy feedback, cymbals being thrashed within an inch of their lives and keyboards being given a right seeing-to. This must have been what it was like seeing an early gig by the Flaming Lips and it was something to be treasured. Everybody on stage and everybody in the audience was grinning. If any band deserved an encore then Pink Kink surely did, but whether through a strict curfew or the fact that they came off stage looking completely knackered, one never transpired.

Here’s to the next time, Pink Kink! We can’t wait to see them again and when they finally get around to releasing some music it’ll have been well worth waiting for.

Bring on the kazoos! 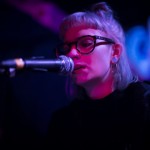 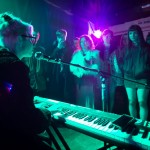 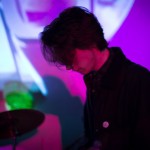 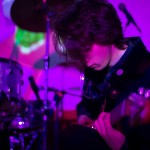 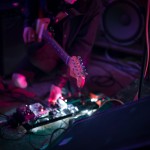 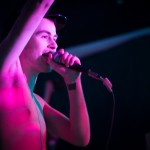 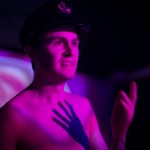 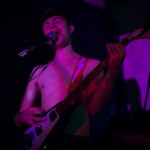 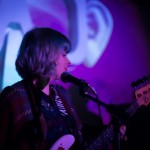 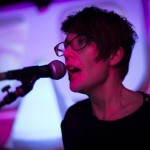 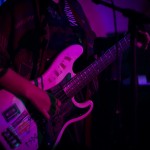 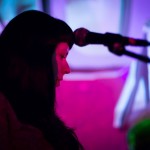 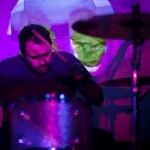 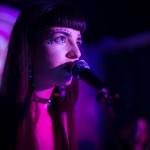 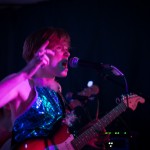 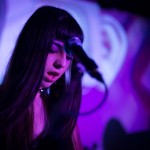