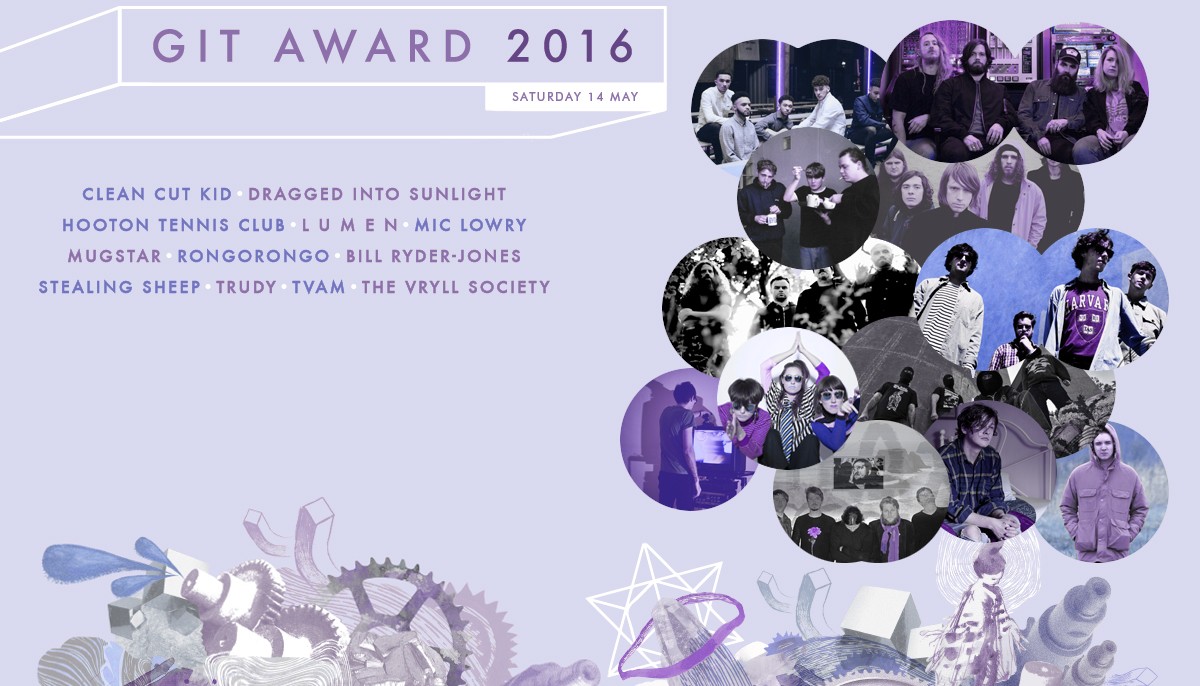 The countdown to the GIT Award 2016 can now be measured on mere hours! Getintothis’ David Hall wraps up every detail you need and brings you all the exciting build-up from this years’ ceremony

The GIT Award 2016 winner will be crowned tonight at a spectacular event which takes place at Constellations in Liverpool’s Baltic Triangle, with excitement now reaching fever pitch.

Prior to the main show, Constellations will host a BBQ – with the public welcome to rub shoulders with GIT Award ticket holders – to the sounds of DJ sets from music journalist Jamie Bowman and rising pop-rockers Pink Kink.

The event itself will be ably hosted by BBC Radio Merseyside punk legend Roger Hill, while Liverpool-based architectural company ArchiPhonic are once again involved in setting the scene and creating the visual spectacle accompanying the GIT Award live show.

Limited tickets for the GIT Award 2016 are available here

The party then moves to new Baltic Triangle-based venue The Black Lodge, where the GIT Award 2016 aftershow DJs will include Heavenly Recordings founder Jeff Barrett and fellow label head Danny Mitchell, as well as a few surprises throughout the night.

Ahead of the award show, Getintothis writers have sat down with this year’s nominees to find out more about them. Clean Cut Kid spoke about the allure of the fuzzy pop and super-sweet harmonies of singles like Vitamin C and Twenty Years From Now, while uncompromising outsiders Dragged Into Sunlight‘s black metal is not for the faint-hearted.

It’s a second GIT Award nomination in a row for Ellesmere Port’s Hooton Tennis Club, who have enjoyed a huge 12 months since their signing to Heavenly Recordings in early 2015. Shy but confident LIMF Academy graduate 17-year old Aintree-born L U M E N showcased all he is about on debut track What Will Life Make Of You.

Mentored by Liverpool soul star Esco Williams, MiC Lowry are fast becoming Liverpool’s next big pop sensations, whereas Krautrock inspired foursome Mugstar are veterans releasing their recent eighth studio album. RongoRongo, may not yet have recorded their debut album, but have made waves ever since their debut gig and subsequent EP release.

With a third GIT Award nod and his orchestral arrangement No Worst, There Is None set to be performed, it promises to be a busy weekend for Bill Ryder-Jones. Meanwhile, Stealing Sheep came to the world’s attention following an undisputed SXSW triumph, proving the GIT Award‘s global credentials.

Currently studying at LIPA, rabble rousing rockabilly-infused mutant guitar popsters Trudy find themselves in esteemed company such as TVAM, who has received praise from Lauren Laverne and Clash amongst others. Finally, with a talent for epic psych-rock voyages,The Vryll Society have enjoyed support slots alongside Blossoms, following their debut EP Pangea‘s release on Deltasonic Records.

Now celebrating it’s fifth anniversary, the GIT Award has crowned past winners All We Are, Forest Swords, Baltic Fleet and Loved Ones, as well as drawing attention to up-and-coming acts such as Låpsley, who scooped the inaugural One to Watch Award. This year’s One to Watch was this week announced as 17-year-old R&B artist Tayá, whose future looks bright.

On the night, the Inspiration Award will also be announced, with past winners including Alan Wills of Deltasonic, The Kazimier Team, Africa Oye and the Hillsborough Justice Collective.