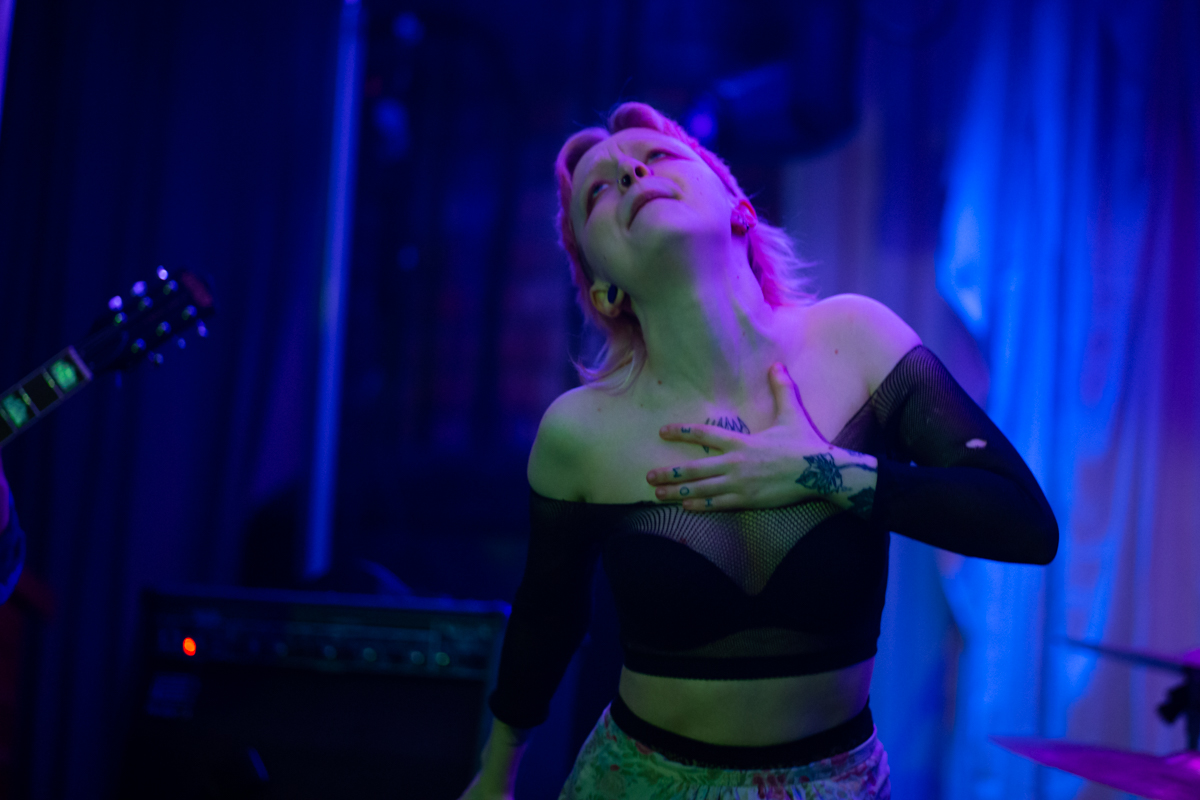 Witch Fever headlined a quality all female bill at Jacaranda Phase One and Getintothis’ Peter Goodbody braved a cold January Monday night for an essential mix.

To kick off Independent Venue Week Getintothis hosted this Independent Women night at Phase One.

And it’s hard to think of a better pairing of venue and headliner than this with both making waves in their own independent ways. Phase One has bucked the trend of venues in town closing or disappearing and seems to be becoming a place where music and musicians are taken seriously. (We have already made this point in an opinion piece at the end of the Tim Burgess review).

Manchester’s Witch Fever, too, are busy doing their own thing, letting their music do the talking and just getting on with the job of leaving stunned impressions wherever they play. It’s difficult to see where their competition comes from – there is literally no other band quite like them who can pack such a punch, but at the same time exude class and style.

Tonight was their third gig in Liverpool in less than 12 months, so presumably they like it here. But so do we like them and although Phase One can’t be said to have been packed for this one, it was a decent enough turnout. We blame the weather. And January.

Some credit for that must also go to the rest of the bill. A really strong support line up, about all of whom we have written in these pages before. Add into the mix spoken word performances from Cath Holland and Janaya Pickett as well as an art stall from Johanna Wilson, aka That Girl Who Prints and we have an intriguing evening on our hands.

How To Be A Feminist Top 10

Sara Wolff goes first. Well, someone has to.

She opens with Pineapple Soda, followed by Cotton Socks, but despite these somewhat kind of comforting titles, the songs have developed a richness and a depth over the few gigs we’ve seen Sara play. And, happily, unlike one earlier gig, the audience behaved impeccably. For that, they were rewarded with a set from one of Liverpool’s surely rising stars.

She finishes with her recent single, Scarf Song – a pretty vicious song about love and betrayal. “I made this scarf to keep you warm. To keep yourself safe from harm. But now I want to tighten it around your neck”. Don’t mess with Sara.

Janaya gave us a trio of poems, the first two on the theme of growing up as a black girl in Liverpool and the assumptions people make based on that fact alone. Which is your favourite Public Enemy song? she was asked once.

Along with the observation that Louise from Eternal was nearly always everyone’s favourite. Because, hey, she’s white. These were verses of teenage angst, for sure. Just with added colour thrown into the mix for good measure.

She makes them sound funny – and they are. But they aren’t really.

Getintothis’ top film picks to for 2019

Mersey Wylie, says Hello and delivers a stripped back set in a manner she says she’s not done before. Just her voice and an accompanying guitarist, Jack Taylor. The set is based on her recently released EP – The Skin I Live In – the main theme of which is mental health. A feature with which Mersey says she has a tumultuous relationship.

Her voice is strong when it needs to be and soft when it doesn’t. Either way, it’s a joy and demands attention, which is what it got from the audience.

“I’m not just somebody’s daughter, sister, I’m a woman and woman is enough” she belts out. Despite the fact she says she’s jet-lagged and coming down with a cold, this was a near perfect performance in which she demonstrated how good she is at this singing lark.

Mersey finishes off with a song called Stronger. It’s a song of defiance. It starts slow and quiet, with Mersey clicking her fingers for a rhythm section. But, that doesn’t last for too long and the refrain “Stronger than before, not afraid to fall” is delivered with significant power and obvious feeling. And not once does her voice even begin to crack.

There’s a bit of a pause in proceedings, so we wander over to have a look Johanna Wilson’s stand. She has a series of screen prints on offer and it was she who was responsible for the artwork for tonight’s event poster. They’re cool images – almost collages or double exposures. But a rather satisfying mix of themes and colours that complement tonight’s proceedings and the thinking behind it. 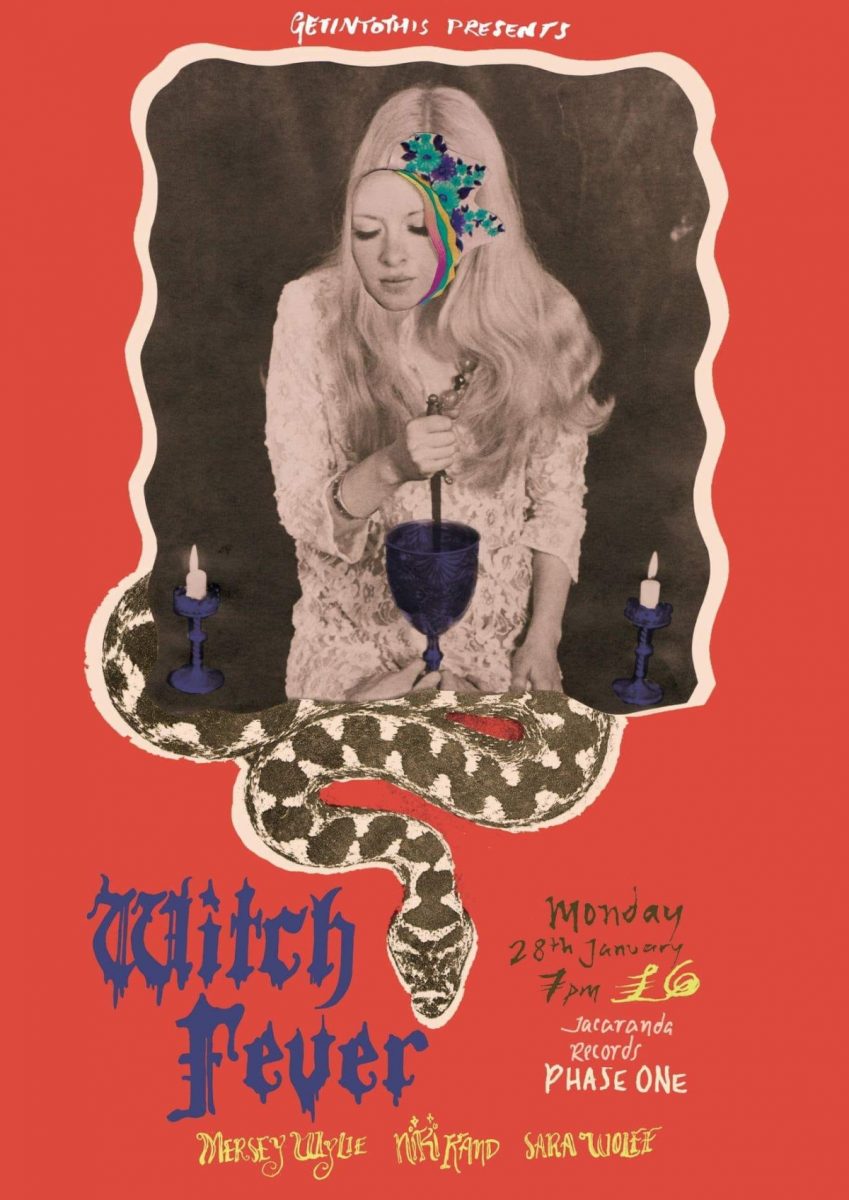 Cath Holland arrives with what she acknowledges is a fair amount of literature. “Don’t worry” she says. “You’re not getting a lecture. But you are getting a bit of fiction and non-fiction. This one’s about slut shaming. Because why shouldn’t we have fun?” Not a walk of shame story, but a strut with the protagonist holding her head high on the way home in the early morning.

“Brexit, Brexit, Brexit”. It caused a lot of discourse about the working class and why they were treated as a homogeneous group who all voted out. Cath read an excerpt from an essay she wrote for a book called Know Your Place – Essays on the working class by the working class. She makes the point that working hard does not make you rich or give you good mental health. Hard work does not correlate to results and status. A badly paid job, like cleaning, keeps you poor, no matter how hard you work. Hard work does not equate to status. It’s sobering and thought-provoking.

Mental health in music – no one listens anymore, a musician’s perspective

Both Cath and Janaya prove there is a place for spoken word pieces at gigs and it has power at times. When it’s done well, as it was tonight, the audience will pay attention.

Niki Kand is the pop act of the bill. A role she fulfills well with a keyboard and backing tracks played through her phone. It’s catchy, dancey stuff without being cheesy. It’s a good shout.

She finishes off with single, Bleeding Hearts. Tech difficulties meant she had to improvise and use the Jac’s shitty mobile reception to get the backing track from YouTube. And, it worked. Yay! It’s the kind of material that could and should get a wider audience.

It’s not challenging, but that’s probably the point. It’s car radio music or the stuff you listen to while you’re getting ready to go out. It’s feel-good music. And it works.

“Thanks for coming out. It’s a busy week we know, so cheers”.

It’s a short set as well – 6 songs from Witch Fever. The smoke machine was getting to singer Amy and she was clearly not happy. But even so, it was a roaring storming set that refused to compromise. There isn’t much off limits for Witch Fever. Sex and religion being recurring themes. And we’re reminded of Public Image at times, such is the way Amy prowls around the stage like she’s searching out prey on which to fix her steely gaze and melt them at a 100 paces.

Bloody boss that. @WITCHFEVER brought a billowing bombastic wall of boss noise to @phaseonelpool – tremendous opening night of @IVW_UK in Liverpool. Thanks to everyone who joined us. Magik. ✊🏻🌚 pic.twitter.com/QGOjSSNGEZ

Witch Fever pummel and pound their songs into submission in a way we simply don’t see any other band doing.

They finish half off the stage and half on it in a hail of screaming feedback and the punters file out wanting more but knowing that will have to wait for another day. There is no doubt Witch Fever have left an indelible mark on Phase One.

It was a pity it had to end so soon, but there we go. What we got was brilliant

As an aside, but a significant one, every song played by the DJ in between sets was a female artist, from X Ray Spex to Peaches to Blondie to The Runaways and everyone else in between. So, no men on the bill tonight.

As for your reviewer, well, he had a good night and let’s just leave that there. 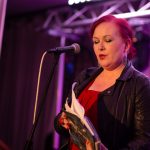 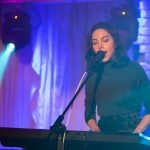 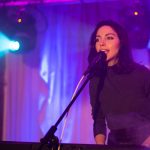 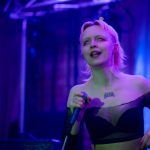 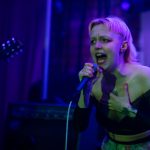 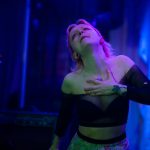 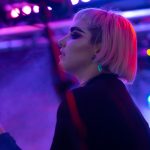 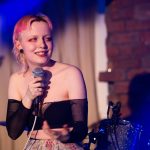 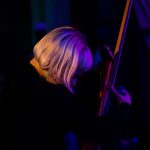 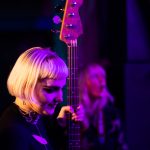 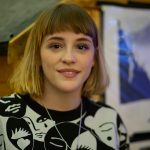 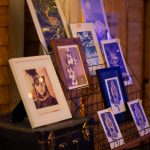 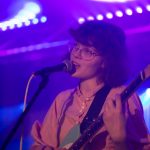 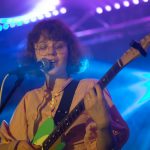 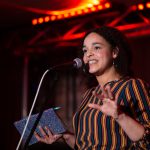 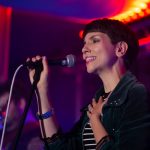 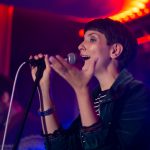