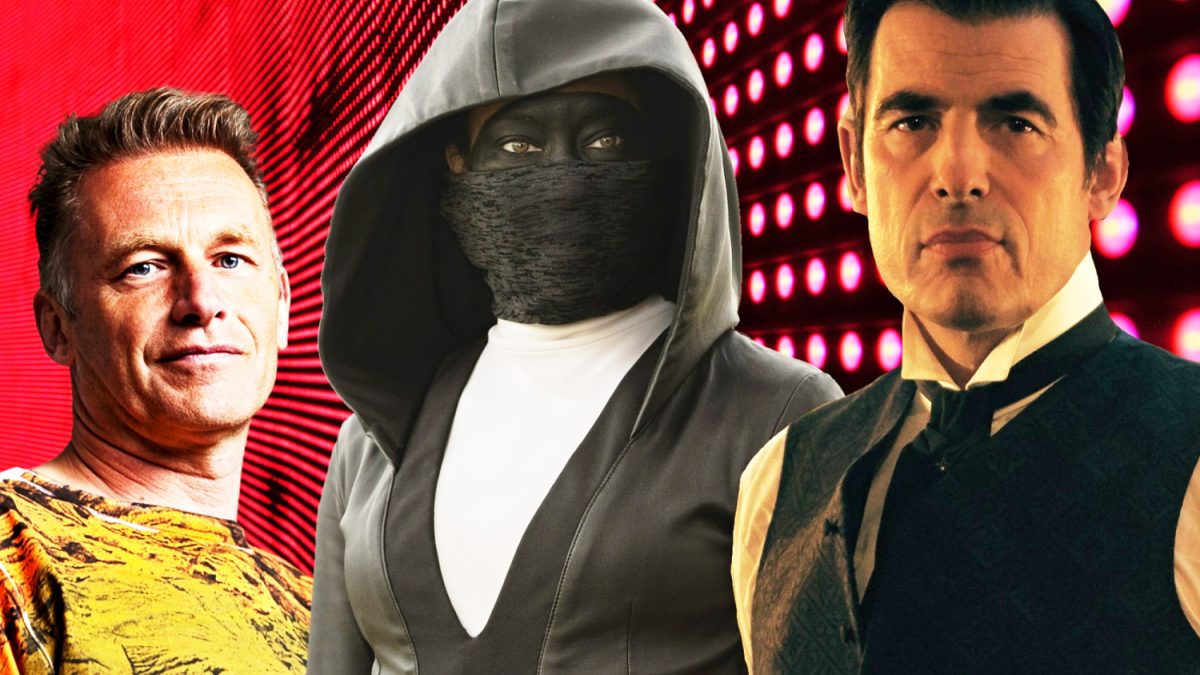 Getintothis has always picked up on the most interesting moving pictures that flicker into our eyes via the small screen.

The new column wanders further into tellyland, exploring the shows that are getting people talking, unearthing the odd hidden gem and seeking out some stuff that genuinely deserves our precious eye-power.

After all, we are in (so they say) the Golden Age of television, so we may as well bask in the glow – or find reasons to change the channel.

Now is a good time to start, with the 2020’s new offerings beginning to drop and the big productions from the turn of the year still enjoying their catchup afterlife.

Coming at the end of the official season of eating, drinking and compulsive shopping, the arrival of the ultimate consumer on our TV screens seemed monstrously logical. 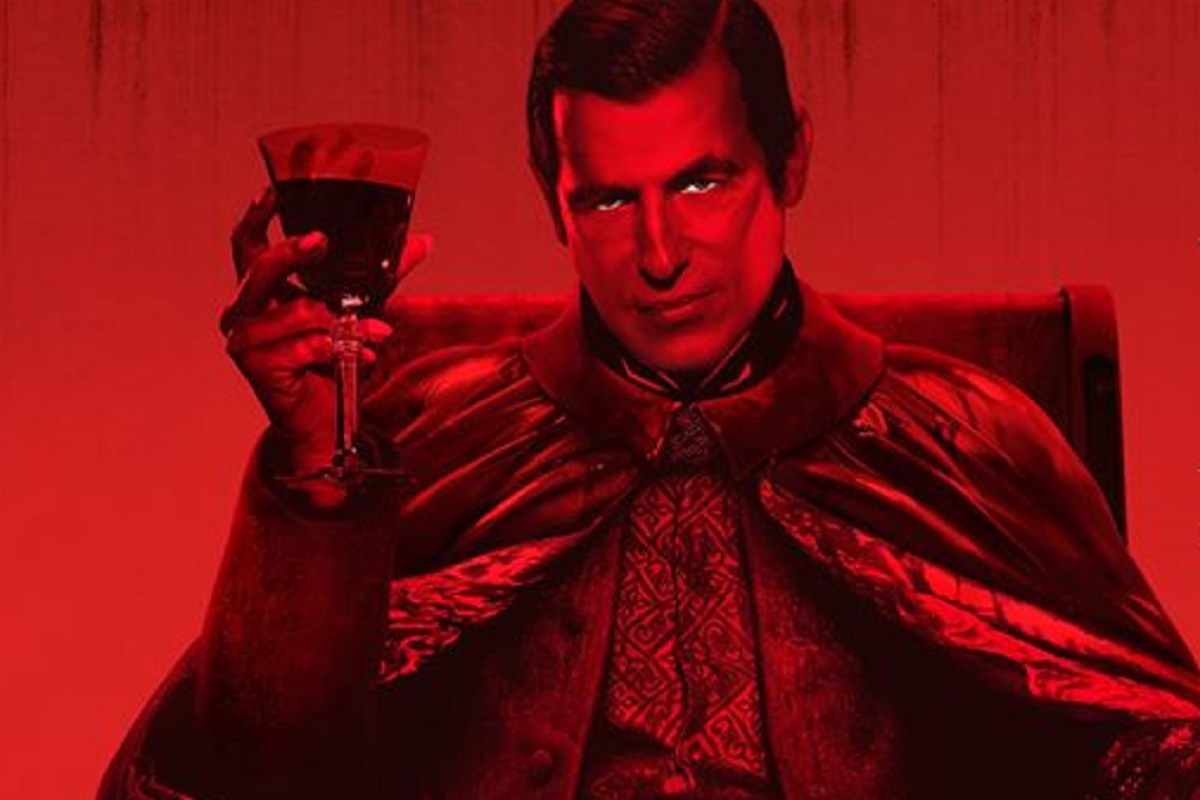 Dracula munched his way through a blood-spattered three-night stand in a new adaptation by Steven Moffat and Mark Gatiss, in a New Year spectacle.

Dracula is one of fiction’s great survivors – like a virus he adapts and mutates, endlessly reappearing. Within the tales that’s what he does – transforming into bats, mist and what-not to evade staking and ‘live’ to bite again.

And in real life that’s what we do with him, inviting him back for repeated resurrections that cross genres – since the novel came out in 1897 there have been adaptations for stage, screen and comic-book page as well as legions of sequels, pastiches, crossovers and imitations.

The Moffat/Gatiss Dracula (BBC/Netflix) has fun with this extensive legacy, littering the shows with visual references to vampires we have loved, from Nosferatu to Buffy via Christopher Lee.

Some found such intertextual playfulness a tad annoying, evidence of too much entitlement on the part of the creators. Hints of gayness had some people tearing up their TV licenses.

But the biggest cause of dissent, even among people who absolutely loved the first two episodes, was the major switch of tone, setting and plot for the finale. Among other things, viewers felt that a line had been crossed – deviating too much from the ‘real’ Dracula. The creators had got it wrong. 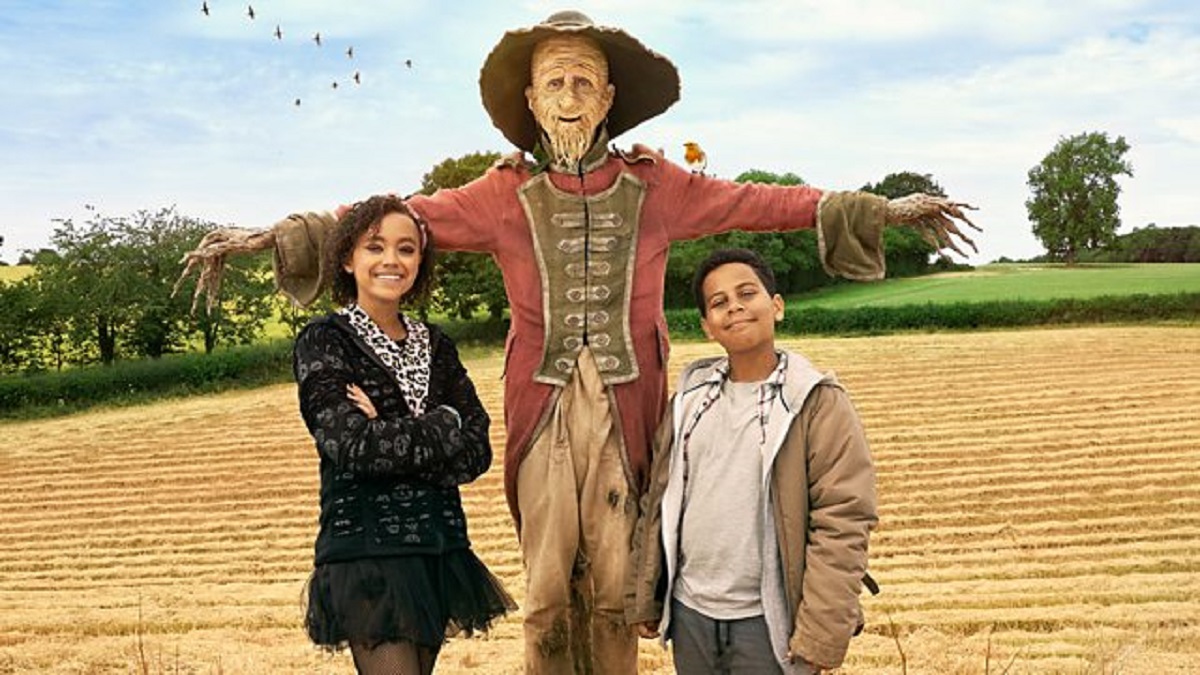 Rewind a few days and another quasi-human legendary folk-hero of these isles was brought back to our screens – Worzel Gummidge.

Here we see the scarecrow of Ten Acre Field tapping into the mythology of the land to face the menaces of the current era such as climate change and pollution. The new Worzel as a hero for our times was very popular, seen as a triumph of reimagining.

However it wasn’t for absolutely everyone.

Some were aghast at other changes from the original, by which they meant the 79-81 TV version featuring Jon Pertwee rather than the book series that came out between 1936 and 1963.

Strangely it is possible to get upset about how authentic a story about a talking scarecrow is.

And there were people who fulminated against the ‘diversity’ of not casting white actors as the kids.

Similar ‘why oh why must the BBC change things’ cries went up as A Christmas Carol aired in a new version starring Guy Pearce, Vinette Robinson and Andy Serkis.

Changes to the plot that gave Scrooge and Marley as international capitalist exploiters, sexual abuse and some reengineered plot mechanics sparked online fussing.

And again, sadly, a minority of viewers found making the Cratchits a mixed-race family (with Vinette Robinson’s superb casting as Mary Cratchit) to be a cause for complaint.

For all the depressingly predictable comments that I shouldn’t have been cast in A Christmas Carol please see the below thread and thank you @WhoresofYore for compiling it. https://t.co/QMpIH3D3vT

Obviously full-on racists, homophobes and the kind of folks who throw terms like ‘woke’ around as an insult feel threatened by seeing anything other than a straight, binary-gender whiteout on their screens.

But for some the desire for stories to stay the same isn’t just part of a mental landscape of fear and hatred.

Harking back to imagined golden age is a common human foible – somewhere back in time there was a period when things made more sense. In that lost paradise everyone had their identity sorted and change was slow.

In those good old days you knew who Dracula was, he could be relied on not to reveal male brides or hurtle into 2019 without warning.

No-one wants to spend all their telly-watching time agonising over which side of various faultlines in our culture the drama falls. (Thoughts like ‘Are we allowed to like it? Is it progressive enough? Well done casting a POC actor – hang on they’ve made her a witch, that’s a bit stereotypical – what shall I put in my tweet?’ can get tedious.)

And yet our heroes and villains and the stories we tell about them are important. They say something about how we see ourselves, our hopes, dreams and fears.

The classic versions have already been made – and can still be seen.

When a female Doctor Who arrived they didn’t erase all previous versions; they can be watched to your heart’s content. And there’s enough escapist drama to spend 24 hours a day in comfortable bygone worlds.

Doctor Who returns – a slick and confident blockbuster

So let’s have more brave and unpredictable adaptations, alongside exciting new drama.

Let’s see casting and characters drawn from the rich and weird circus that is the messy world of human beings on this planet.

Let’s have stories that are entertaining, and at the same time say something about where we are in the present day.

Look at Shakespeare for instance – he’s Britain’s national bard; you could hardly find anyone more integral to cultural identity. And his works have been adapted in every conceivable way.

That includes attempts at faithful re-creations of how they were staged at the time, as well as modern versions and countless transformations.

The world is big enough for all kinds and it’s a strength that new ways to use his work can still speak to us now.

In this production, directed by Adam Smethurst, the multicultural cast speak the lines as natural dialogue and the 400-year-old play crackles with energy.

Watching it is to watch a deeply affecting comedy – one that’s provoking thoughts about identity, gender and sexuality.

Which is what the play has always done – sometimes making a modern update is the best way to be faithful to the original creation. 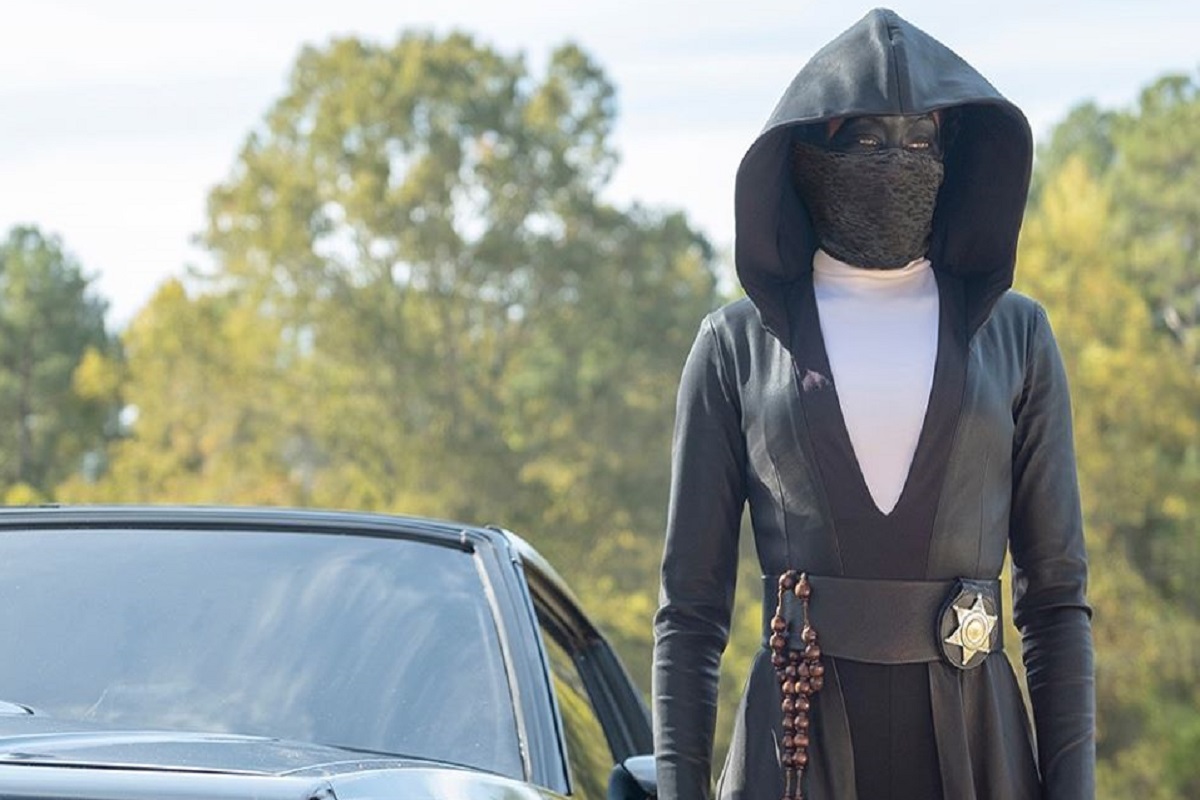 The source material for Watchmen (Sky Atlantic/Now TV) was itself a dark, fresh take in what has gone before.

The 1986 graphic novel looked at superheroes through a playful paranoid lens, asking questions about the nature of vigilantism, the fetishistic aspects of dress-up and the sociopolitical implications of having an all-powerful being around the place.

The HBO series created by Lost showrunner Damon Lindelof picks up 30 years later. The story is a pseudohistory, an alternative timeline influenced by the science-fictional events of the first Watchmen story.

But it is grounded in real, hidden history, the reality of the 1921 ‘Black Wall Street massacre’, when vigilantes including KKK members destroyed a 35-block area of Tulsa, killing and injuring black citizens and wrecking businesses.

The plot is a swervy conspiracy story, with deeply disturbing insights into white supremacy. But it is also about justice, ends justifying means, power, and the experience of living through times of change and upheaval.
.
If you haven’t read the graphic novel, Watchmen can be – er – watched as one of those shows like The OA where baffling events and clues slowly unfold to reveal what’s going on.

If you prefer to have some reference points, get yourself a copy of the book by Alan Moore and Dave Gibbons. Unless it is unavoidably already in your eyes, ignore the 2009 movie that a) sucked and b) differs from the book and TV storyline.

Watchmen is exemplary thoughtful TV fantasy, intriguing and allusive, a pulp hall of mirrors that throws back uncomfortable reflections. 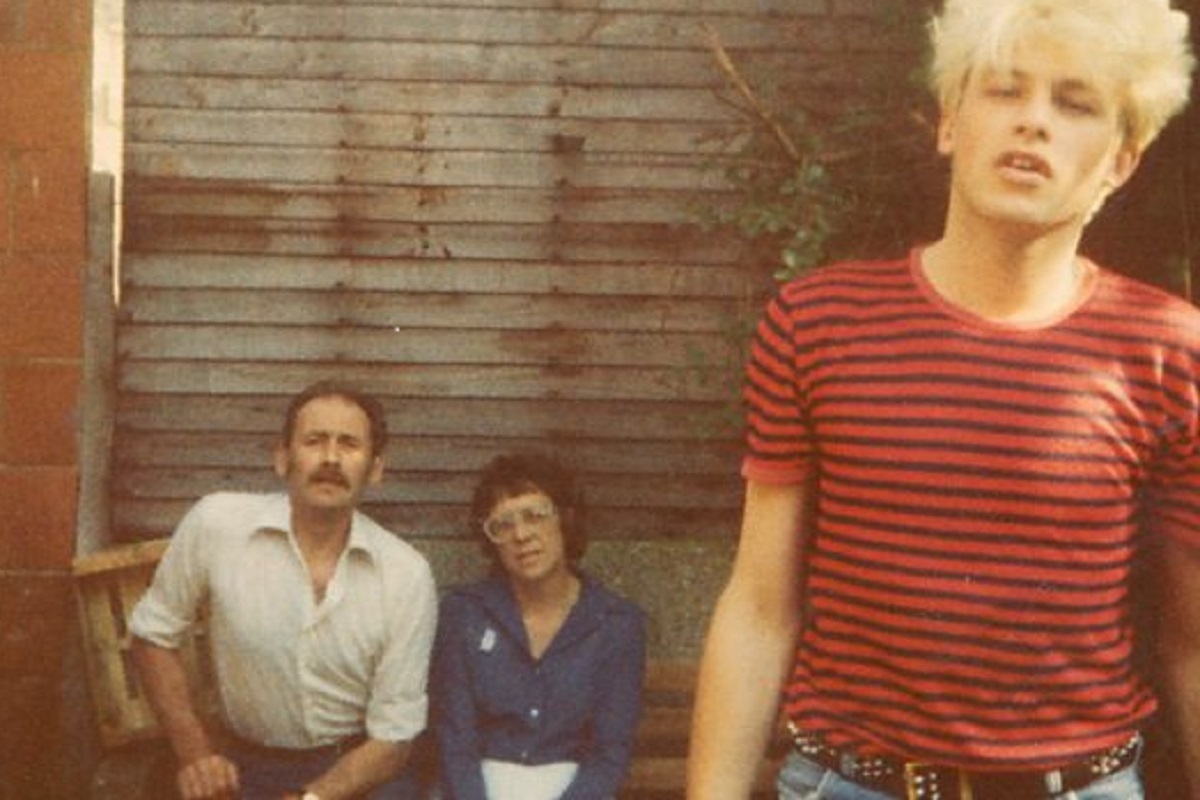 Forever Punk starts with naturalist Chris Packham outside Buckingham Palace, waiting to get his CBE, wearing a nice suit and an Extinction Rebellion tie. “Have I become the bastard I would have hated when I was seventeen?” he reflects.

There is of course some irony in an avowed punk rocker receiving one of the highest honours in the land.

Though with a Prime Minister claiming to be a Clash fan, is punk still a countercultural rebellious genre?

For all we know, these days the PM’s weekly meetings with the Monarch are spent discussing the relative merits of London Calling and Sandinista!, or whether Combat Rock was really as terrible as people say it is.

Nevertheless in Chris Packham‘s entertaining personal reflection, punk certainly was and is a positive force for change.

Through his own testimony and interviews with folks from back in the day including Jordan, Pauline Murray and Tom Robinson, we hear about punk rock as liberating and transforming, an inspiration for creative escape from the grey, Electric Light Orchestrated gloom of 1970s Britain.

Absolutely loved this documentary by @ChrisGPackham talking about how punk as an ethos that drove him still continues to have an influence today. I've got so many friends this applies to! Well worth a watch! Chris Packham: Forever Punk: https://t.co/XiUBZtitfb via @bbciplayer

In this narrative based on British – actually English – artists, punk was purposeful, leading to protest movements like Rock Against Racism.

The same energy has carried forward to current upsurges of dissent including Extinction Rebellion, he argues.

He charts the punk origins of his commitment to environmental activism, drawing a direct line between his teenage self playing Damned Damned Damned on a Dansette in his bedroom (until his mum intervenes in a moment of direct action , destroying the LP) and his rousing address to a vast XR crowd in London.

Forever Punk is one person’s individual viewpoint, a dyed-in-the-mohair fan validating the movement as a life-changing force for good.

But it isn’t all rosy – he discusses violence with a behatted Jimmy Pursey, and quizzes Pervez Bilgrami and Ausaf Abbas from Alien Kulture about their current roles as investment bankers.

What comes through most strongly is Packham‘s passion and sincerity, and Forever Punk is an inspiring watch.

Somewhere along the line Forever Punk must have been cut – or perhaps artfully ripped like a Seditionaries t-shirt – as trailed appearances by Alan Moore and Don Letts didn’t appear. Maybe an extended version will appear at some point. 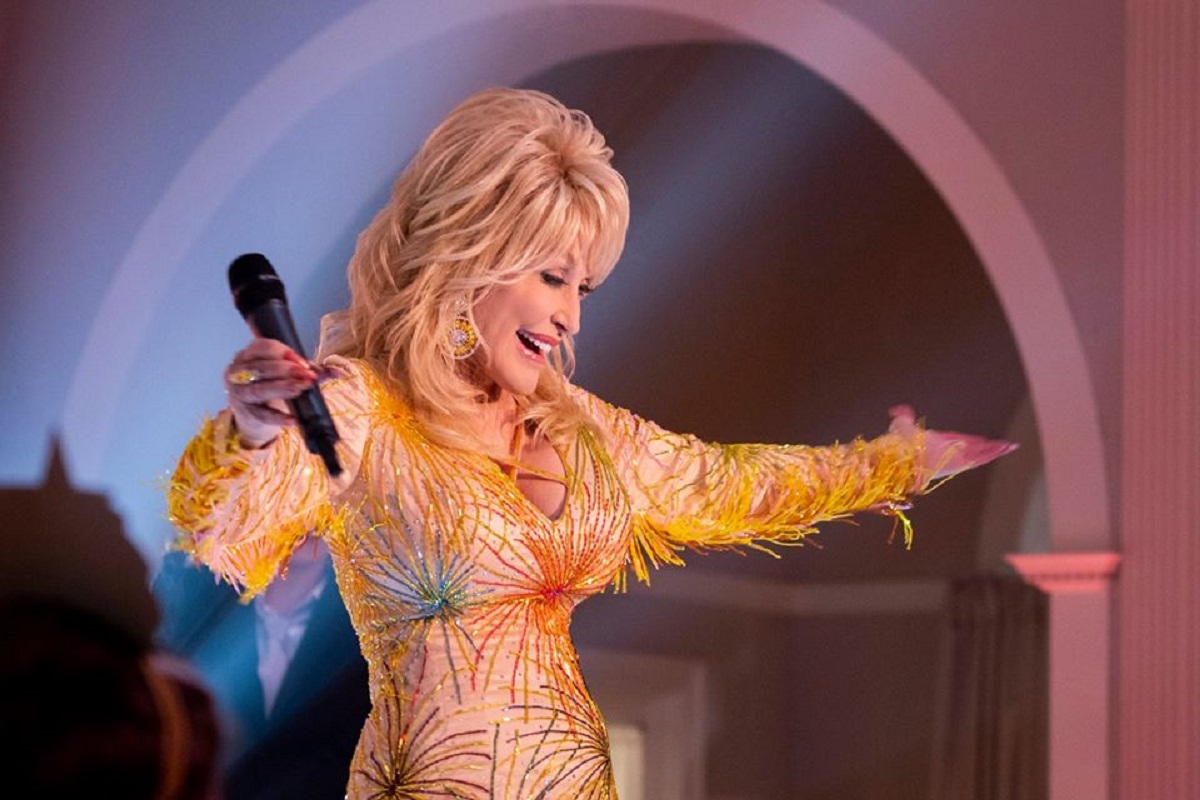 Heartstrings, or to give it its anatomically correctly title Dolly Parton’s Heartstrings, features the beloved and eternal Dolly Parton introducing and playing roles in hour-long dramas based on her songs.

The tone is sunny, like a Hallmark show with slightly more adult themes.

Dolly herself acts as narrator and appears in supporting roles, like a god visiting her own creation incognito.

Now we can see what Jolene looks like and can learn why she might be going to take somebody’s man. Set the controls for heartwarming.

Perhaps this concept will take off. It could be interesting to see some other artists doing the same things.