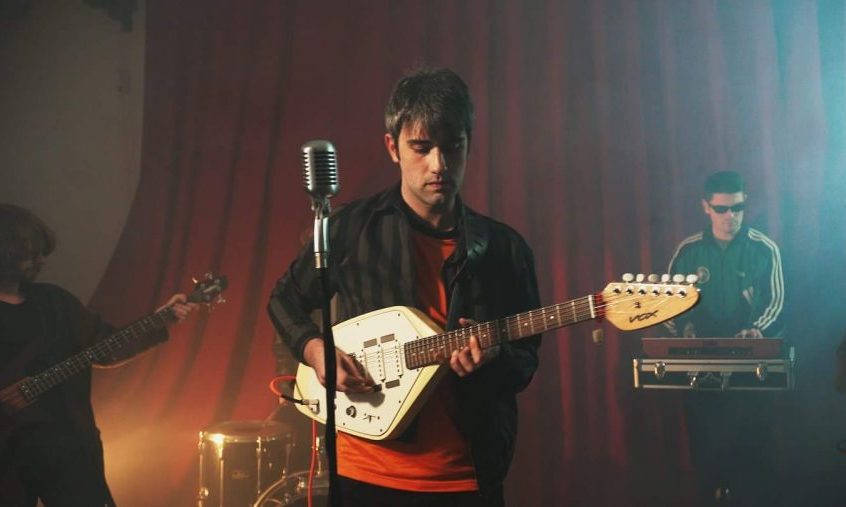 This week’s Single of the Week is Oranj Son’s Whole Hunger, and with mighty competition as Getintothis’ Howard Doupé has a butchers at what’s doing the rounds this week.

Well, here we are again. Another Friday comes hurtling round, another inbox bulging with new nuggets to tantilise your earbuds.

Yes, yes, yes, but isn’t Friday’s all about the album releases these days? Leering over a laptop screen or squinting into a phone at 11:59pm waiting for the sixty seconds to count down and that download/listen button to spring into life.

Half the time we’re struggling to keep the lids open through Question Time, let alone remember to check the new releases whilst clambering up the stairs to our resting places.

Nevermind, the double heart-attack factor of remembering who was putting out an album in enough time to miss clashing with gig tickets going on sale a mere nine hours later! Anyone wishing the defib. was under their tree this year?

Hang on a min, no! Album’s ain’t the only reason to thirst for new music, the humble single still remains. Ok, so the actual ‘hold it in your hands’ feeling ain’t one that’s too familiar these days.

The killer track still has the power to launch careers into interstellar orbit- what do you think is the criteria for that playlist inclusion eh?

With that shining light of power, the ‘latest release’, ‘first taste’, ‘debut track’ are phrases very much associated with those single press releases.

Now here’s some local talent to get excited about!

Oranj Son are a 4-piece band hailing from Ellesmere Port. Whole Hunger is their latest offering- a disco infused pop doozy drawing upon influence from the likes of Scott Walker, Pet Shop Boys, The Teardrop Explodes, The Human League and Air.

Whole Hunger draws upon the 1960’s pop sentiment of baring all. That absolute unapologetic and untamed devotion to another person.

With near perfect shimmering guitar lines, and a voice that brings back memories of early NOW! compilations- the ones with the single digits. These lads are set for higher sights indeed.

Badly Drawn Boy: Is This A Dream?
Kobalt Music

Everyone’s favourite woolly-hat wearing troubadour makes his long awaited return with Is This A Dream? It’s been eight years since the soundtrack to the De Niro film Being Flynn came out and a seven year recording hiatus.

After a return to live performances with a splattering of solo gigs through last year, a lot is riding on this for boy Gough. Harnessing a huge soundscape, this typically beautifully melodic ditty taps into his classic trademarks everyone’s yearning for simpler times.

Not one to shy away, ‘The song is a sound collage of chaos and confusion to reflect the ridiculous times we live in.’ says Gough.

Complete with stunning animated video by Broken Antler, check it out.

Collectress: In The Streets, In The Fields
Peeler Records

The experimental, playful and deeply collective, Collectress have been using an expansive palate bursting with colour for two decades now. Their unique surrealist-tinged chamber pop uses dance as a means to explore the nature of the music.

With nods to both psychedelic (particularly 13th Floor Elevators) and the 1937 recording of Virginia Woolf’s Words, In The Fields, In The Streets takes you on an imaginary journey whilst managing to keep you grounded in reality.

Leading with a haunting piano refrain, there’s more in common with Mogwai’s Les Revenants soundtrack- imagine Penguin Café’s The Imperfect Sea injected with inspiration from a bleak, melancholic dystopian introspection and you’re there.

London based five-piece HMLTD continue to release tracks from their forthcoming debut album West Of Eden. This synth-pop indebted song deals in the Western mythologies that shape young minds.

It’s a road-worn melodic modern honky-tonk ditty that despite the weight of its content is surprising uplifting.

Frontman Henry Spychalski on the chorus reminds us ‘the world is a blank slate’, how true…they’re touring next month an’ all.

BC Camplight: Back To Work
Bella Union

Back To Work is the first release from forthcoming album Shortly After Takeoff, the final, and finest, chapter of what BC Camplight (Brian Christinzio) calls his ‘Manchester Trilogy’. All of which were created in the city after moving from his native Philadelphia.

Harnessing dreamy AOR and robotic funk on the track that uses the trick of stylistic shifts, which Christinzio accredits to a ‘pretty low attention span.’

It’s a moody drive through wastelands of a wandering mind, retaining those trademark melodic vocals and truth-laden lyrics.

There’s also a seven date UK tour towards the end of the year to start getting excited about kicking off in Bristol on November 17 and ending at Manchester’s O2 Ritz November 27.

This alt-pop duo hail from St.Louis, MO and their latest offering has already made impressive dents in streaming stats.

There are a few comparisons to twenty one pilots to be made here, this edgy-emo that emerged from the ashes of a scene once dominated by the My Chemical Romances, Jimmy Eats Worlds and Linkin Parks of the world.

Singer Ben McGuiness says, ‘the song Gray is more of an explanation of my feelings after the damage had been done. It’s kind of a toxic romance vibe, but ultimately was pretty liberating for me.’

Yes, you haven’t misread that, there is a new release for a golden nugget from the 60’s. The DJ’ing duo Deptford Northern Soul Club, originators of their own club night are back with their second release on their vinyl revival label.

Launched back in November with a pressing of Lester Tipton’s This Won’t Change, the Staton choice continues the trend. The super rare track was released briefly in 1969 before being withdrawn. It went on to become a surprise hit with Staton’s UK fans due to its Northern Soul affiliations.

Original copies have been known to exchange hands for a mind-bending £2K- spin to that Frank Wilson!

Chromatics: TOY
Italians Do It Better

Back with minimalist sugar-coated electro-pop, Chromatics are here to while away your neon filled nights.

It’s graceful, full of 80’s glamour every Human League fan will be foaming for. ‘It’s a song about trying to forget someone you’re still in love with even though they treat you like an object.’ Says Ruth Radelet.

If you like your tunes to transport you to another world then do your best to catch these at the sprinkling of festivals this summer.

Local lass and GIT Award nominee Jetta is making quite a name for herself. Occupying the dizzying heights of rubbing shoulders with the likes of Pharrell whilst being mentored by the masterminds behind Destiny’s Child and Mary J Blige.

Livin’ is a throwback to 90’s club pop sounds, tapping into a feel-good time, in terms of UK garage.

Coming out on resurrected 70’s label Casablanca Records, known for its legendary status back in the infamous days of Studio 54. Now it serves as a home for both Dance and Electronic music.

St South: Does Your Brain Ever Get This Loud?
Nettwerk

Australian St. South releases her debut track for Nettwerk. As singer, songwriter and producer she’s worked tirelessly in perfecting her own brand of nuanced and soulful electro.

Does Your Brain Ever Get This Loud is sprinkled with nostalgic fuzz and a warm layered sample of St. South’s voice. Softly pulsing forth, she recounts the crisis that hits in your mid 20s, ‘I’m often riddled with self-doubt. But this song is the process of accepting that, while learning that it’s completely ok to feel lost and purposeless.’

Belter of a title too!

Aidan Moffat tweaks the radio dial once more to Nyx Nótt to reveal more music from his new moniker.

One for all you creatures of the night, Radio Nyx Episode 2 from the forthcoming album Aux Pieds De La Nuit brings together neglected electronic transmissions, soundtrack elements and free jazz.

The essence of night and Moffat’s moonlit tinkerings became such a prominent role in the creative process that his new alias had to reflect this too. ‘I originally planned to release the album anonymously and tried to think of a convincing, exotic name that suited the nocturnal themes of the album. Nyx and Nótt are two mythical goddesses of night, Nyx from the Greek and Nótt from old Norse.’ Says Moffat.

Tune in and drift off below…

Primed for inclusion straight on to a 6 Music A Playlist This Heat, is the taster for Deeper’s forthcoming second album Auto-Pain. It brings together all those classic angular guitar bands with shouty vocals. Wearing their loves blatantly on their sleeves, it’s a Wire, Gang Of Four and Magazine-fest here.

All tied nicely together with elements of Talking Heads, blended with The Cure’s pop sensibilities of lyric and melody.

They’re on the UK roads next month too.

Over the course of a career spanning two decades, the Parisian pop genius Sébastien Tellier has forged his own unique journey.

His eclectic strand of pop-electronica has been sampled by The Weeknd, he has collaborated with everyone from Jean-Michel Jarre to Daft Punk and Sofia Coppola, gatecrashed the Eurovision Song Contest in a golf cart!

With A Ballet, Tellier captures the keen melodies of classic pop combined with the flair of the dreamy French electronica that he’s renowned for. His vocodered vocals deliver lyrics which feel part romantic and part cryptic, while a hazy sax and laidback beats echo the yacht rock era. The song’s title is a pun which plays on artistry and domesticity.

A ballet sounds much like the French word balai – a broom. Make of that what you will!

Dan Snaith aka Caribou, following on from previously shared singles, a new single from his forthcoming album Suddenly (his first in five years) has been released in the form of Never Come Back.

Immensely satisfying and playful, Never Come Back encompasses the heart at the centre of Suddenly as repeated samples build around Snaith‘s confident vocals to effortless euphoria.

After a run of singles, HAARM return with Dahlia. There’s attitude, vocal hooks and a killer chorus that uses synths to the extreme.

It’s a groove that quickly becomes a right earworm. Keep up with these guys, it could be their time to shine in 2020.

Everything Is Recorded: 10:51 PM / The Night
XL Recordings

Pure energy; stripped-back simplicity; a big Smog sample; creative spontaneity; two contrasting but equally vital new collaborators; the universal feeling of anticipation and excitement that fuel a Friday night out… these are the raw materials that make up 10:51PM / THE NIGHT, from Richard Russell’s collaborative artist project Everything Is Recorded.

It’s the first new music in nearly two years from the London artist and producer, whose eponymous debut album was released in 2018 and went on to be nominated for the Mercury Music Prize.

It introduces two new Everything Is Recorded collaborators in the form of Trinidad-born Londoner Berwyn (his first official release) and Galway’s Maria Somerville.

To finish off this weeks roundup,  here’s something a little different- a 40 min music and documentary hybrid video of the bands time recording their second album Interstellar Voodoo.

Released last year, there followed a wave of intrigue into the recording session, which gave birth to the concept behind this.

There’s quirky over lays of techy info and insightful tit-bits. Even down to where a particular sticker found on the Ole Sletner’s bass guitar came from.

It’s a mad, handy cam ride through the actual recording. Go make a brew, put your feet up and prepare to become absorbed.