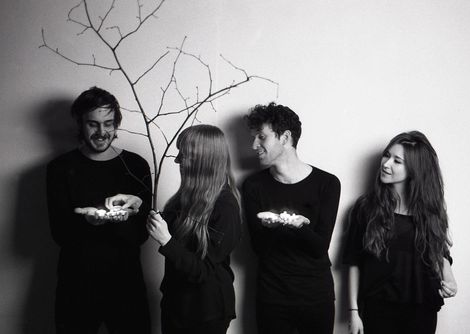 Liverpool tribal goth outfit Bird share lead single to be taken from their new album due in May ahead of tour with cult icon Rodriguez, Getintothis’ Adam Lowerson reports.

The next 12 months look set to be dramatic for Liverpool quartet, Bird.
With a debut album in the works, and having recently signed to hometown label Baltic Records, it has just been announced that the band are set to support Rodriguez, of Searching For Sugarman fame, on his upcoming European tour.
The string of dates will see Bird perform in countries such as Poland and Belgium, with more shows yet to be announced. With debut album My Fear and Me set for release in May, Bird have revealed single The Rain Song as the first taster of what is to come.
The Rain Song combines their characteristically haunting atmospherics with pounding drums which build like a racing heartbeat, gradually increasing in intensity until a euphoric climax. The creeping guitar line is dark and gives an uneasy feeling, and when matched with eerie atmospherics and the aforementioned drumbeats, paints the image of an almighty storm, fitting well with the track’s title.
Singer Adele Emmas‘ vocals are delicate, dripping with reverb giving it a ghost-like quality. Her voice is filled with the feeling of fear, and mirrors the drum track by growing more and more intense as the song progresses. Emmas exudes the aura of a troubled soul with such dark beauty, that the track surrounds the listener in a way that you can’t help but get carried away with the overwhelming emotions of the music.
The Rain Song, out on February 24, is an illustration of the mesmerising feelings of emotion and heartache that Bird are capable of portraying in their music and provides a suitable taster of what we can expect to hear from the Liverpool band’s debut album.