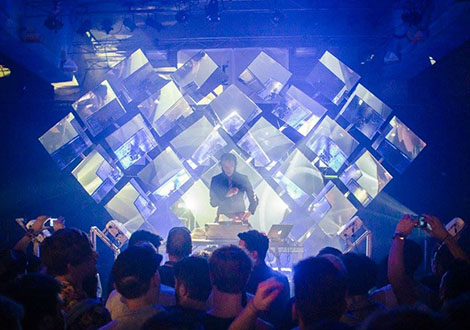 Daedelus presents a visual and aural delight at the Kazimier, man in the mirror Getintothis’ Aaron Farrell, gyrates to the beams of light.

When Getintothis first heard about Daedelus aka Alfred Darlington coming to Liverpool a few days before his fellow LA beat counterpart Peanut Butter Wolf, we felt 16 again.
It was at that age we discovered the multi-talented Los Angeles Beatsmiths, especially those who played at the much-revered Lincoln Heights Club Low End Theory.
His body of work is astonishing. Broadly speaking, his musical style captures the era of early Ninja Tune nu-jazz with sample chops, breakbeat plus drum and bass.
It can be wonkily-constructed but also profoundly intelligent dance music, so it’s near enough impossible to pigeonhole. We have also found his music highly emotive and, at times, melancholic – so seeing him live was going to be a fascinating experience.
His 2013 record release Drown Out has a collection of songs you would enjoy most in the solitude of your home but then he’d come out with a remix of Gilles Peterson‘s song of the year, Lone‘s Airglow Fires and that solitude would evaporate into a full on jazz hands dancefloor movement. Just think of Lone travelling through a wormhole to the 1930s.
Before the show, we got the chance to meet Mr Darlington. We expressed our condolences for the loss of his equipment which was stolen at a NYE show in LA’s Grand Park.
He humbly explained that the security didn’t expect a crowd of that magnitude on reasons to why he didn’t retrieve his lost laptop and Monome. His lesson gives other musicians helpful advice to always back up their stuff.
He also informed us there will be a follow up to the self titled debut album of The Long Lost – the collaborative project between he and his wife, Laura Darlington.
The show at the Kazimier began with a short promo clip tying in with the launch of FACT‘s science fiction New Death series which explores the blurred lines of the virtual and everyday reality in technology. We don’t exactly understand what the concept of ‘New Death’ means but there’s nothing dystopian about robotic moving mirrors as a backdrop for Daedelus‘ set.
In the first few minutes, we are succumbed to darkness and the slow movement of the mirrors that look like a disco ball flattened into a mural on stage.
The only visible lighting is that of flashing musical piece, the monome, which is presented openly on his desk to share with the audience to simply show how buttons are pressed. We’ve seen in many live performances through our laptop screens on how he wizards on it like a cauldron of loops and percussion so we were about to witness this in real time.
Mirrors began to tilt in unison with the music and all of a sudden there’s beams of green light which photographed our memory to the lighting in Jennifer Lopez‘s music video Waiting For Tonight (no musical reference at all).
The light beaming on the mirror from several angles made the Kazimier transform into something completely alien to what it would look like with a typical audio/visual set up.
The music synced perfectly with this illuminating backdrop. Each track had a kaleidoscopic effect, just like those 24 motored mirrors. Among the more obscure moments, Daedelus throws in a dark atmospheric take on Beyonce‘s Drunk In Love and as the music unfolded, with every drop and change, the mirrors would dramatically flip and a different colour would illuminate the theatre in-the-round. There were plenty of greens and magentas.
It was a spectacle. Our only desire is to see this at a larger venue – just imagine the effect at the Echo Arena.
Visuals are becoming more integral to the full enjoyment of a musical performance. Video art is most common but moving objects on stage is a rare experience – especially away from the confines of a large arena. How soon before we see a stage invasion of robotic dancers in the near future – Daedelus has us dreaming.
Further reading on Getintothis:
Peanut Butter Wolf, Fingathing: The Kazimier, Liverpool
Jonwayne and Mad Brains saddle up for Shipping Forecast joint
Peanut Butter Wolf weighs in with heavyweight Kazimier date
Evian Christ, Travis Scott, Lil Silva: The Oval Space, London
The Label Recordings: Hooton Tennis Club and The Inkhearts
Dan Croll: The Kazimier, Liverpool
Moats: Snakepit
Liverpool Music Week 2014: 10th edition of city festival announced
Evian Christ to play debut Liverpool show at Abandon Silence